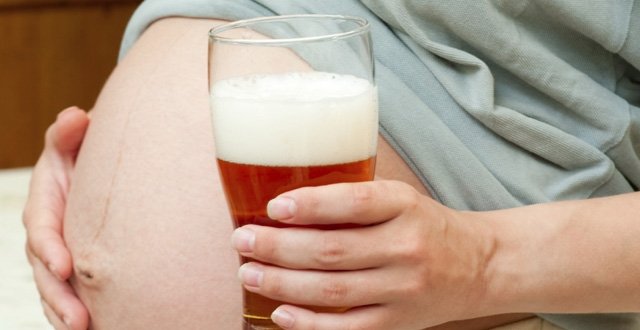 Damage to the foetus from alcohol takes a number of forms and can show up as behavioural, social, learning and attention difficulties in childhood, adolescence and throughout adulthood. Drinking heavily during pregnancy can also increase the chances of complications during pregnancy and childbirth, increasing the risk of premature delivery, miscarriage and stillbirth.

Children born with FAS – the most rare, but most easily recognisable condition on the spectrum – have been exposed to high levels of alcohol during pregnancy and can experience problems with their growth, facial defects, as well as life-long learning and behavioural problems.

FASD refers to the wide range of less obvious — and much more common — effects of drinking alcohol during pregnancy. Although children with FASD can look healthy and normal, they can have issues such as sight and hearing difficulties, problems paying attention and following simple directions, as well as other learning difficulties.

Damage to the foetus from alcohol takes a number of forms and can show up as behavioural, social, learning and attention difficulties in childhood, adolescence and throughout adulthood

Partial Foetal Alcohol Syndrome, (pFAS), alcohol-related neurodevelopmental disorder (ARND) and alcohol-related birth defects are far less easily diagnosed. According to Dr Kieran O’Malley, Child and Adolescent Psychiatrist, Charlemont Clinic, Dublin, an expert in the area of alcohol-related health issues, the prevalence of ARND continues to be under-recognised, as it is mainly presented as a faceless ‘hidden disability’ “(masquerading as ADHD, mood disorder or ASD), rather than a facial dysmorphic disorder”.

“The subtle denial and minimisation of transgenerational alcohol abuse is aided only by diagnosing the far less-frequent dysmorphic ARND (FAS). This creates a false security across social classes concerning alcohol’s true transgenerational epigenetic effect. Thus, the real financial costs and healthcare burden of transgenerational ARND, with an international prevalence of one in 100 live births, is avoided,” he said.

There is no national register of FASD, therefore the number of cases of FASD, FAS and ARND in Ireland is unknown, while FASD is also commonly misdiagnosed or unconfirmed. However, studies on alcohol consumption among Irish women during pregnancy suggest the number of affected children may be significant.

One of the best-known Irish studies in the area (though nearly 10 years old) at the Coombe Women and Infants University Hospital found that almost two-thirds (63 per cent) of the more than 43,000 women surveyed at the hospital between 1999 and 2005 said they drank alcohol during their pregnancy. A further study in the same hospital was published in 2011, and saw researchers questioning 61,241 women who attended the Coombe between 2000 and 2007 to investigate how much alcohol the women consumed during pregnancy and what, if any, effects this had on the babies born. Some 71 per cent of women who took part in the study claimed to be occasional drinkers (peri-conceptional period) who consumed up to five units of alcohol per week, while 9.9 per cent reported moderate intake and 0.2 reported high intake.

According to the researchers, the advice offered to women on drinking during pregnancy can be confusing, and the study emphasised the need for improved detection and management of alcohol misuse in pregnancy and for early intervention in order to minimise the risks to the developing foetus.

A recently published BMJ study (July 2015), looking at pregnancy drinking rates in Ireland, the UK, Australia and New Zealand, found that Ireland had the highest rates of drinking, both before (90 per cent) and during (82 per cent) pregnancy, and of binge drinking, before (59 per cent) and during (45 per cent) pregnancy, based on estimates from the Screening for Pregnancy Endpoints (SCOPE) study. Estimates of drinking during pregnancy from the Growing Up in Ireland (GUI) and the Pregnancy Risk Assessment Monitoring System (PRAMS) studies were substantially lower (20-to-46 per cent), but still at levels that warrant serious concern.

In summary, the researchers found that alcohol use during pregnancy is highly prevalent and evidence shows that gestational alcohol exposure may occur in over 75 per cent of pregnancies in Ireland. This high prevalence was, in general, pervasive across all social groups, and of the predictors of alcohol consumption examined, smoking was the only consistent predictor of alcohol use across all cohorts and countries examined.

The number of pregnant women who drank heavily in the three studies was small, but the researchers point out that the adverse consequences of heavy alcohol consumption during pregnancy on birth outcomes, long-term gross motor function and social, cognitive, emotional and behavioural outcomes in offspring make heavy gestational alcohol consumption a high public health priority.

They also added that “since most women who consume alcohol do so at lower levels where the offspring growth and development effects are less well understood (than at higher levels), the widespread consumption of even low levels of alcohol during pregnancy is a significant public health concern”.

Overall, the study findings illustrate low adherence to alcohol guidelines advising complete abstinence from alcohol during pregnancy in Ireland. New policy and interventions are required to reduce alcohol prevalence both prior to and during pregnancy, the study concluded. Further research on biological markers and conventions for measuring alcohol use in pregnancy is required to improve the validity and reliability of prevalence estimates, the study researchers added.

Ms Suzanne Costello, CEO of Alcohol Action Ireland, warned about the dangers of drinking alcohol while pregnant due to the risk of damaging the physical and mental development of the unborn child.

“Damage to the unborn child from alcohol takes a number of forms and, as well as physical problems, can show up as behavioural, social, learning and attention difficulties in childhood, adolescence and throughout adulthood. As such, there can be life-long consequences for the physical and mental health of an unborn child exposed to alcohol in the womb.”

Ms Costello said that, despite these risks, pregnant women in Ireland can receive conflicting advice about alcohol consumption during pregnancy and called for a clear and consistent message of ‘no alcohol, no risk’ to be delivered across all healthcare providers.

“Pregnant women can often receive mixed messages, from various sources, including healthcare providers, about drinking alcohol during pregnancy. This conflicting advice arises, in some part, due to uncertainty regarding the amount of alcohol required to impair the foetus and the timing of alcohol exposure,” said Ms Costello.

“However, no quantity of alcohol has ever been proven to be safe to consume during pregnancy and no period of pregnancy has been shown to be immune to the effects of alcohol on the unborn child. What is very clear is that there are no benefits for the unborn child from exposure to alcohol, just risks, and these risks increase in line with how much alcohol an expectant mother drinks.

“The forthcoming Public Health Alcohol Bill provides for the introduction of labelling of alcohol products, which is a very welcome development, as it is another way to help people make more informed choices around their health and wellbeing in relation to alcohol. These new labels will include health warnings about the risks associated with alcohol consumption during pregnancy.”

Ms Michele Savage, of support and advocacy group FASD Ireland, noted that children who suffer from prenatal alcohol exposure are left with irreversible, life-long consequences that are heartbreaking to witness, especially as they can be completely avoided by simply not drinking alcohol during pregnancy.

“Brain damage from prenatal alcohol exposure causes sensory integration issues, slow rates of cognitive processing, impairs a child’s working memory and organisational skills, so they simply cannot fulfil their potential… Changes of school, suspensions and expulsions feature a lot in the lives of these children and their families, despite the best efforts of many, or all, concerned. Parents and carers have to constantly do battle for the children to be understood and appropriately helped.”

Ms Savage said that children affected by FASD do not mature as they should and cannot cope as well as their unaffected peers, which can be very upsetting and stressful for them, particularly as they realise their own limitations.

“These youngsters don’t always, or even often, safely or successfully cope socially in their age group and are very vulnerable to being exploited, bullied or abused in childhood, or as adults. Facing into adulthood is a huge cause for concern — a true battle between the rights and expected responsibilities of young people with very uneven capacities, most of whom will not get and keep a job or ever to be able to live a fully independent life.”