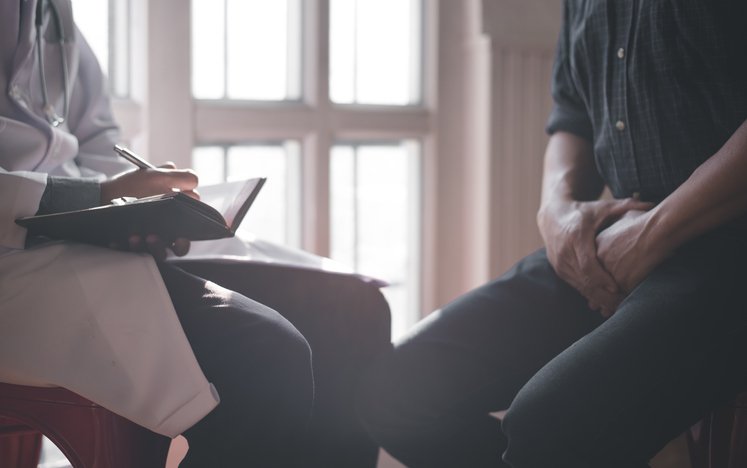 Prostate cancer is one of the most common, but also most successfully treated cancers in men

A common RNASEL variant involves a mutation resulting in decreased activity of the encoded ribonuclease L protein, reducing the immune defence against viruses. Men who inherit this mutation have a significantly increased risk of developing prostate cancer. It is estimated that about 20 per cent of patients with prostate cancer report a family history, which may develop not only because of shared genes, but also for a similar pattern of exposure to certain environmental carcinogens and common lifestyle habits. Afro-Caribbean men have the highest incidence of prostate cancer of any group (231.9 per 100,000) while Asian men have the lowest risk.

Although there are no studies that can sufficiently demonstrate the direct correlation between diet and nutrition with risk or prevention of prostate cancer development, many preclinical studies that looked at links between certain eating behaviours and cancer suggest there may be a connection.

When the prostate gland becomes cancerous, it can put pressure on the urethra, causing dysuria, a burning sensation and frequency of micturition. It can also cause hesitancy, a weak and intermittent flow, nocturia, haematuria and impotence or sexual dysfunction. Other symptoms include swollen lymph nodes in the groin and pain in the pelvis, hips, back, or ribs. More advanced stages of the disease may present with urinary retention and back pain, as the axis skeleton is the most common site of bony metastatic disease. Prostate cancer should not be confused with benign prostate hyperplasia (BPH), which has similar symptoms and often occurs in older men.

Prostate cancers usually grow very slowly, and symptoms may not occur for some time. If the prostate is enlarged, a preliminary diagnosis can be made by rectal examination or transrectal ultrasound (TRUS). A PSA blood test is used to detect prostate tumours in their earliest stages in high-risk individuals. Although originally introduced as a tumour marker for the detection of cancer recurrence, PSA testing became widely adopted as a screening tool for prostate cancer. However, it is not prostate cancer-specific and other prostate conditions, such as BPH or prostatitis, can also affect PSA levels. If prostate cancer is suspected a biopsy is done to confirm the diagnosis. When detected early, prostate cancer is very treatable. A large majority of prostate cancers are diagnosed either before they have spread or when they have spread only locally. Survival rates in these cases are very high.

The Gleason Score is a grading system used to determine the aggressiveness of prostate cancer and can be used to choose appropriate treatment options. The Gleason Score ranges from 1-5 and describes how much the cancer looks like healthy or abnormal tissue. Most cancers score a grade 3 or higher. Since prostate tumours are often made up of cancerous cells that have different grades, two grades are assigned for each patient.  A primary grade is given to describe the cells that make up the largest area of the tumour and a secondary grade is given to describe the cells of the next largest area. If the Gleason Score is written as 3+4=7, it means most of the tumour is grade 3 and the next largest section of the tumour is grade 4. If the cancer is almost entirely made up of cells with the same score, the grade for that area is counted twice to calculate the total Gleason Score.

Typical Gleason Scores range from 6-10.  The higher the Gleason Score, the more likely that the cancer will grow and spread quickly. Scores of 6 or less describe cancer cells that look similar to normal cells and suggest that the cancer is likely to grow slowly. A score of 7 suggests an intermediate risk for aggressive cancer.  Scoring a 7 means that the largest section of the tumour (primary score) scored a 3 or 4.  Tumours with a primary score of 3 and a secondary score of 4 have a reasonably good outlook, whereas cancers with a primary Gleason Score of 4 and a secondary score of 3, are more likely to grow and spread. Scores of 8 or higher describe cancers that are likely to spread more rapidly, often referred to as high grade or poorly differentiated.

Treatment options for patients with prostate cancer depend on the stage and grade of the cancer and include active surveillance, watchful waiting, hormone therapy, radical prostatectomy, external beam radiotherapy, and brachytherapy. Active surveillance involves a PSA blood test every three months and a digital rectal exam (DRE) every six months for the first year, followed by a PSA blood test every six months and a DRE at least once a year. Prostate biopsies and imaging tests may also be done every one-to-three years. Because prostate cancers usually progress slowly, a ‘watchful waiting’ approach rather than immediate treatment may be recommended.

This is especially true for patients who are elderly or in otherwise poor health. In patients with intermediate or high-risk localised prostate cancer with a real prospect of long-term disease control and those with locally-advanced disease, radical prostatectomy or radical radiotherapy should be offered.

Hormone therapy is the primary treatment for metastatic prostate cancer, but is also used for patients with locally-advanced, non-metastatic disease. In patients with localised prostate cancer, the choice of treatment depends on whether the disease is low, intermediate, or high risk. Hormone therapy (androgen suppression or androgen deprivation therapy (ADT)) attacks androgens that stimulate the growth of prostate cancer. A form of hormone therapy involves LHRH analogs or LHRH agonists, such as buserelin, goserelin, leuprorelin acetate or triptorelin that chemically block the production of androgens. Side-effects of hormone therapy include reduced libido, sexual dysfunction, osteoporosis, gynaecomastia and hot flushes.

EBRT can be used to try to cure earlier stage cancers, or to help relieve symptoms, such as bone pain if the cancer has spread to a specific area of bone. Surgery is usually only carried out if the cancer has not spread from the prostate. A radical prostatectomy may be considered if examination of the pelvic lymph nodes reveals that they are not cancerous. Surgical risks can include impotence and urinary incontinence. TURP can be used to relieve symptoms, but does not remove all of the cancer. TURP is often used in men who cannot have a radical prostatectomy because of advanced age or illness or in men who have a non-cancerous enlargement of the prostate. In men who are unable to have traditional surgery, cryosurgery may also be used.

If the cancer has spread from the prostate, radiation therapy may be used. Bi lateral orchidectomy should be offered to all patients with metastatic prostate cancer as an alternative to continuous LHRH agonist treatment. If surgery or hormone therapy fails, chemotherapy may be used. While chemotherapy can slow the growth of the tumour, it is not very effective in treating prostate cancer.

Prostate cancer presents a number of challenges for primary care clinicians. Many men with prostate cancer are asymptomatic until the tumour has progressed and common symptoms have significant crossover with benign conditions affecting the prostate.  PSA-based testing of prostate cancer is very common but remains controversial. The value of screening remains uncertain because the PSA test does not distinguish between benign and malignant disease and there has been no proof that early treatment leads to increased cure rates. DRE alone is insufficient for screening as its positive predictive value is only 11-to-26 per cent.

Current diagnostic tests have limitations in terms of significant false positive and false negative rates, however, research is ongoing into improved methods for diagnosing prostate cancer. Understanding the underlying causes of prostate cancer, including genetics and pathogenesis, has improved substantially in recent years. Nanotechnology has shown initial success in prostate cancer disease diagnosis, imaging and treatment.