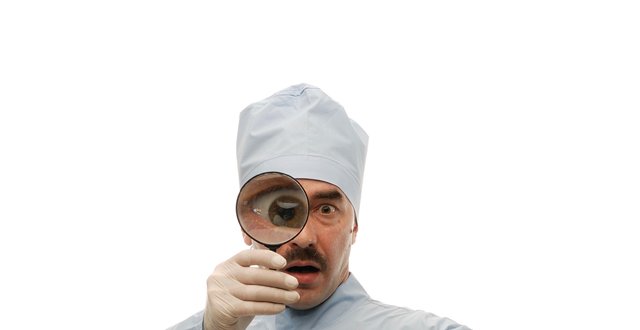 H H Holmes trained in the University of Michigan Medical School, where he hatched a cunning plan to steal bodies from the lab and take out bogus insurance policies on them. Holmes then disfigured the corpses and claimed they had been in an accident so that he could cash-in on the policies.

He was highly motivated by money — he cheated a widow out of her husband’s pharmacy business and used the ill-gotten gains to build a large hotel. This was not a guy you wanted to work for — he forced his employees (mainly female) to take out life insurance policies, naming him as the beneficiary. It’s not difficult to guess what happened to these employees soon after and Holmes built gas lines into some rooms, used his basement to torture and dismember his victims and sold the body parts to research labs.

Those who believe in karma will note that when he was caught and hanged in 1897, his neck failed to break and it took some 20 minutes for him to expire.

American Michael Swango had ‘red flag’ written all over him. As a medical student, his peers were disturbed by his scrapbook, which was filled with horrific, gruesome disasters. While he worked as an intern in 1883, several of his patients died while alone with him in a room, arousing the suspicion of nurses. Years later, it was estimated that he had killed between 30 and 60 of his patients.

In an effort to satisfy his unquenchable thirst for gore, he took a job as an ambulance driver in Illinois, even admitting that he did so because he enjoyed gruesome injuries and the sight of blood. Again, his new co-workers became suspicious and his remedy for this was to slip them ant poison in donuts and coffee.

He was finally rumbled when his clever colleagues deliberately left him alone with a pitcher of tea, which was later tested and found to contain large quantities of ant poison.

There are of course many more famous doctor-killers, but nurses also have a share in the pantheon of medical misdeeds.

Last century, Jane Toppan killed at least 31 patients with morphine and atropine injections but was clever enough to distribute these killings over a 20-year period and avoid early detection.

While she was a nursing student, she altered medication dosages to see what effect this would have on patients and when she qualified as a nurse, she really got the ball rolling.

She was caught when she killed Alden Davis and two of his daughters while doing private nursing work. Before she was incarcerated, Toppan declared that she wanted to kill more people than anyone who had ever lived.

And a final dishonourable mention goes to Beverley Allitt, a nurse who worked in the children’s ward at Grantham and Kesteven Hospital, Lincolnshire, England. Over the course of almost two months in 1991, Allitt murdered four children by administering lethal doses of insulin and injecting air bubbles into their bloodstreams. Taking into account that she also attempted to murder three other children, and badly injured six more, when she was caught she was sentenced to 13 consecutive life sentences.

One would wish the list were shorter — we haven’t even touched on Shipman, Mengele, Dorothea Waddingham, Jayant Patel et al.

I’ll grant you this…

I am filled with a grudging admiration for those who manage to wrangle a grant for research on bizarre topics. To name just a few, here are some of the more weird and wonderful ones.

While it has been officially denied, there are many reports that the Japanese Meteorological Society allegedly performed a seven-year study of whether earthquakes are cause by catfish wiggling their tails.

The Oregon State Health Division and Liverpool School of Tropical Medicine once pioneered a study about salmonella excretion in pigs ‘joy-riding’ on cars.

A tip of the hat to Sintef Unimed in Norway and the Technical University of Denmark, who published a study on wearing wet underwear in the cold, titled: ‘The Impact of Wet Underwear on Thermoregulatory Responses and Thermal Comfort in the Cold.’

A nod likewise to the University of Bergen, Norway, which released a report titled: ‘The Effect of Ale, Garlic and Soured Cream on the Appetite of Leeches.’

The good folks at Wilkes University, in partnership with the wonderfully-named Muzak Holdings, once conducted a study showing that listening to elevator music stimulates the immune system and can help prevent the common cold.

And you would not have wanted to be a participant in the study by the State University of New York, which once released a report titled, ‘Chicken-Plucking as a Measure of Tornado Wind Speed’.

And finally, the venerable Nature once published a study by the University of Bristol on the optimal way to dunk a biscuit into tea.

A quick joke to finish, which was kindly sent to me by a regular contributor.

After a checkup, a doctor becomes suspicious that his patient is holding something back. He asks his patient:“Is there anything you would like to discuss?”

“Well,” said the patient, “I was thinking about getting a vasectomy.”

“That’s a big decision,” replies the doc. “Have you talked it over with your family?”