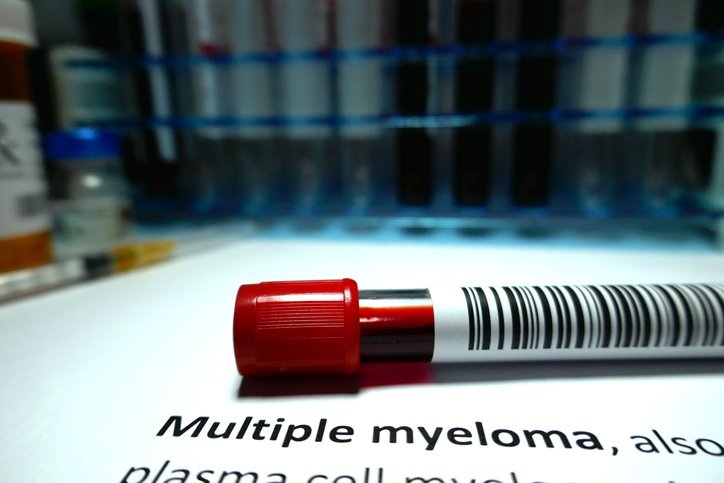 Multiple myeloma (MM) is a relatively uncommon cancer accounting for approximately 1-to-2 per cent of all cancers and about 17 per cent of haematologic malignancies. It is characterised by the neoplastic proliferation of plasma cells producing a monoclonal immunoglobulin. The plasma cells proliferate in the bone marrow and can result in extensive skeletal destruction with osteolytic lesions, osteopaenia, and/or pathologic fractures.

The diagnosis of MM is often suspected because of one (or more) of the following:

Diagnosis is based on clonal bone marrow plasma cells ≥10 per cent or biopsy-proven bony or soft tissue plasmacytoma and presence of at least one related organ or tissue impairment: (Anaemia, renal impairment, bony lesions, hypercalcaemia) or presence of one biomarker associated with near inevitable progression to end-organ damage (≥60 per cent clonal plasma cells in the bone marrow, involved/uninvolved FLC ratio of 100 or more or MRI, with more than one focal lesion (involving bone or bone marrow).

The myeloma therapeutic landscape is ever-growing, with more therapies coming to the clinic. The treatment options in myeloma are rapidly evolving with the introduction of complex multi-novel-agent-based regimens assessed in randomised clinical trials. However, application in the real-world setting is limited due to varying patient, treatment, disease, and funding factors.

The initial approach to MM is based on the evaluation of patients who are eligible for autologous stem cell transplantation (ASCT). Eligible patients typically receive induction therapy with a combination of lenalidomide, bortezomib, and dexamethasone (RVd) or cyclophosphamide, bortezomib, and dexamethasone (CyBorD) followed by stem cell transplantation, consolidation, and maintenance therapy (usually lenalidomide or bortezomib). The new treatments achieve very deep responses and are increasingly used early in the disease course. Many recent trials used new agents early to improve the depth of initial response and enhance longer-term outcomes by producing excellent responses as part of the initial treatment strategies.

The addition of an antibody (daratumumab) to standard induction was evaluated in two studies. The CASSIOPEIA study compared daratumumab in combination with bortezomib, thalidomide, and dexamethasone (D-VTd) vs VTd alone. Overall, the D-VTd arm was associated with a significant increase in the proportion of patients who had at least a very good partial remission to therapy (83.0 vs 78.0 per cent, P=.024).

MRD negativity was noted in 64 per cent of the patients in the D-VTd arm as opposed to 44 per cent in the VTd arm (P<.0001). Similar findings were reported in the GRIFFIN phase 2 study, where patients treated with D–VRd achieved higher rates of at least VGPR (very good partial response) by the end of consolidation compared to those who received RVd (90.9 vs 73.2 per cent, P=.0014). After a median follow-up period of 22 months, MRD negativity (10−5) rate was significantly higher in D–VRd arm compared to RVd arm (51 vs 20.4 per cent, P<.0001). Notably, these benefits (in both CASSIOPEIA and GRIFFIN) were primarily observed in patients with standard-risk disease owing to the low percentage of patients with high-risk disease features included in either study (about 16 per cent).

ASCT is part of the standard treatment for fit patients. It improves overall survival when compared with conventional chemotherapy, and can be performed early in the disease course or at first relapse. Although the impact of ASCT on patient-related outcomes is constantly under scrutiny with the approval of more potent therapies, it remains the standard of patient care.

In a multicentre randomised trial of 700 younger adults with symptomatic newly-diagnosed MM (IFM 2009), treated with RVd therapy plus transplantation versus RVd, transplantation resulted in deeper responses and delay of the first relapse but did not improve overall survival (OS at eight years 60 vs 62 per cent). This gives the rationale for individualisation of the timing for stem cell transplantation.

At the time of relapse, the treatment choice is affected by patient-related and disease-related factors. With the growing number of therapeutic options available, treatment selection and sequencing are challenging. The optimal sequence and choice of agents have not been established, and the choice of therapy depends on several factors, including patient features (age, frailty, bone marrow reserve, comorbidities, performance status), disease characteristics, patient preferences (oral or intravenous), previous treatment factors (response, toxicity), and funding. Patients who develop disease refractory to immunomodulatory drugs (lenalidomide, pomalidomide), proteasome inhibitors (bortezomib, carfilzomib), and CD38-targeting antibodies (daratumumab) are classified as triple-class refractory and have an overall survival of only a few months.

The therapeutic options for this cohort of patients are limited and include participation in clinical trials, and, if available, selinexor, belantamab mafodotin, and cellular immunotherapies. Selinexor (an oral selective exportin 1 inhibitor) has been approved by the US FDA in combination with bortezomib and dexamethasone based on the results of the BOSTON trial. In this multicentre trial, patients who had previously received at least one and at most three prior lines of therapy, received once-weekly selinexor orally in combination with once-weekly bortezomib subcutaneous and low-dose dexamethasone (SVd) twice-weekly orally or the twice-weekly bortezomib plus low-dose dexamethasone (Vd).

The difference in median progression-free survival was 4.4 months (13.9 months for the SVd arm and 9.5 months for the Vd arm). Common adverse reactions reported in at least 20 per cent of patients included nausea, fatigue, decreased appetite, diarrhoea, peripheral neuropathy, upper respiratory tract infection, decreased weight, cataracts, and vomiting.
Another option for this cohort of patients is belantamab mafodotin (an antibody-drug conjugate that targets B-cell maturation antigen -BCMA).

The FDA accelerated DREAMM-2 (NCT 03525678), an open-label, multicentre trial, where patients received either belantamab, 2.5mg/kg or 3.4mg/kg intravenously, once every three weeks until disease progression or unacceptable toxicity. Efficacy was based on overall response rate and response duration, as evaluated by an independent review committee using the International Myeloma Working Group uniform response criteria.

The overall response was 31 per cent; 73 per cent of responders had response durations ≥six months. Belantamab use can be associated with changes in the corneal epithelium resulting in alterations in vision, including severe vision loss and corneal ulcer, and symptoms, such as blurred vision and dry eyes. Ophthalmic exams at baseline, prior to each dose, and promptly for worsening symptoms should be conducted.

Chimeric antigen receptor (CAR) T-cell therapy is utilising modified T lymphocytes to express antigen-specific to the tumour. The first BCMA CAR T-cell therapy (ide-cel, Abecma) was approved by FDA in early 2021. The approval was based on a phase 2 KarMMA clinical trial that included 127 patients, where 88 per cent of patients in the trial had received four or more prior lines of therapy, and 85 per cent were triple class refractory. In this study, the overall response rate was 72 per cent and 28 per cent of patients achieved a stringent complete response that lasted 11 months (median) for all responders and 19 months for those who achieved a stringent complete response.

The treatment was associated with the expected toxicity profile (cytokine release syndrome was seen in 85 per cent of patients). This therapy offers patients a new, effective personalised treatment option that is delivered through a single infusion. It is expected that the second BCMA CAR T-cell therapy (cilta-cel) will be approved as well. Patients with advanced disease should be enrolled in clinical studies evaluating new agents with novel mechanisms of action, if available.

The presence of minimal residual disease (minute numbers of myeloma cells that may remain in the bone marrow of the patient after treatment) has been proved crucial for monitoring remission status and is regarded as the major cause of relapse. Patients who achieve MRD negative status do better. It is reasonable to set a goal of achieving MRD negativity in ongoing and upcoming trials. MRD negativity typically occurs within nine-to-12 months of starting a particular therapy. This means that it is possible to compare one therapy with another after a year without waiting to assess ultimate survival many years into the future and allows for a better assessment of the benefits of one therapy versus another.

The key trends in myeloma care in 2021 will enhance outcomes, but patients and doctors will face serious challenges in the aftermath of the Covid-19 pandemic that result from the reduction of in-person doctors’ appointments and the slowdown of clinical trials. One bright spot is that it is easier now to get the second opinion consults using Zoom.

The therapies based on the early use of novel agents offer a positive outlook to patients with newly diagnosed disease. However, there is no promise of a cure in routine practice. It will be very interesting to see the long-term outcome of two currently ongoing clinical trials for patients with very early disease (high-risk smouldering MM). Both trials offer very intensive combination based therapies to patients with early-stage disease: CESAR trial, using carfilzomib, lenalidomide dexamethasone induction followed by ASCT, and the ASCENT trial, which uses daratumumab, carfilzomib, lenalidomide, and dexamethasone with or without ASCT. Both trials achieve very high levels of MRD negativity (more than 60 per cent), and it will be very interesting to see if MRD negativity is sustained beyond the current three to five years of follow-up.

The treatment landscape in MM has changed significantly and will most likely continue to evolve over the coming years, given the broad range of pharmacotherapies that are under investigation. Currently, ASCT continues to be an essential or integral component of the management of newly diagnosed MM patients despite the advent of novel agents and maintenance therapy. Alternatively, a tailored or personalised approach that utilises MRD status might provide a more accurate methodology for the evaluation of response to new therapies and single outpatients who may not require ASCT or maintenance therapy after initial therapy.

Multiple new treatments, including monoclonal antibodies, small molecules and cellular immunotherapies, are in development and show activity as salvage for the relapsed disease. The validation of their full potential and role in therapy requires participation in well-designed clinical trials and all patients should be encouraged to participate.