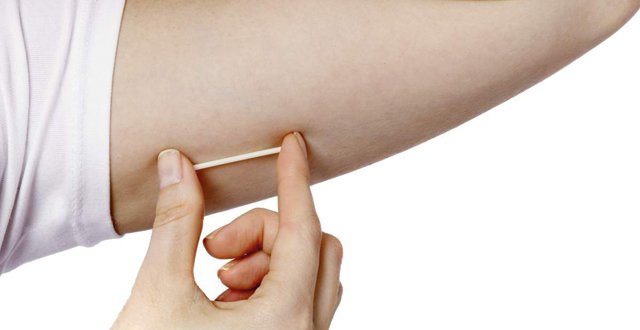 A 19-year-old woman attends complaining of irregular PV bleeding over the last three-to-four months. The bleeds are not painful or heavy but can last for days at a time. They are more brown than red in colour but she also continues to have what she characterises as her “period”, which is a heavier, shorter bleed that seems to occur on a monthly basis. The additional bleeds require she wears a sanitary liner most days and she is feeling some irritation around the vulva as a result of this.

Of note in her past medical history, she became sexually active at the age of 17 and has had two partners in the previous six months. She uses an Implanon NXT device for contraception, which was inserted in a family planning clinic around five months ago, and tries to use condoms for STI prevention as well.

She is not taking any other medications (in particular nothing that may have caused induction of the cytochrome P450 3A4 (CYP3A4) hepatic isoenzymes) and had a negative pregnancy test at the time of her Implanon NXT placement. The device is palpable under the skin of her upper arm.

As unscheduled bleeding is a common side-effect of Implanon NXT it is decided — after discussing this and other possible treatment options with the patient — to try adding in some additional progestogen to see if that helps resolve the problem. She takes a prescription for 10mg dydrogesterone PO to be taken daily but she returns in four weeks to say there has been no improvement.

After further discussion, it is decided to do a bimanual, PV and speculum exam, which reveals a healthy cervix with a noticeable ectropion. A NAAT (nucleic acid amplification test) swab is taken from the area of the cervix, as well as a separate NAAT swab from the lower vagina to screen for chlamydia and gonorrhoea.

One week later, a negative chlamydia/gonorrhoea result is received from the National Virus Reference Laboratory and the patient is contacted. The unscheduled bleeding is now very unlikely to be the result of pathology and further interventions to try and resolve the unscheduled bleeding are offered. The patient agrees to take a different supplemental progestogen — in this instance, 75mg desogestrel (known as the progestogen-only contraceptive hormone pills Cerazette or Azalia). After a few weeks she phones to say she has noticed much less unscheduled bleeding and is content to continue wearing her implant.

Unexpected, unscheduled or ‘breakthrough’ bleeding is a common side-effect of many hormonal contraceptives.

The three-year subdermal contraceptive implant Implanon NXT is often associated with this unpleasant and worrying side-effect. Irregular bleeding was the most frequently reported adverse drug event and the most common reason for discontinuing treatment of the implant in clinical trials. Implanon NXT contains a 68mg reservoir of etonogestrel, which is a synthetic progestogen (or ‘progestin’). It is the chief active metabolite of desogestrel progestin.

The etonogestrel is released from the device through a rate-limiting ethylene membrane at a level of approximately 60-70µg per day after the initial insertion — but this drops to 30-40µg daily release after the first six weeks of use. Etonogestrel causes complete ovulatory suppression by inhibiting the LH rise that precipitates egg release and thus provides excellent protection against pregnancy.

While many other hormonal contraceptives also create an anovulant state in the user, the Implanon NXT is unique because unlike those other contraceptive options, there is no potential for user error (ie, no pills to remember, no injections to return for).

This makes Implanon NXT the most reliable contraceptive choice available in the world today (fewer failures are associated with Implanon NXT use than either vasectomy or tubal ligation).

Younger women seem to suffer more commonly from unscheduled bleeding than older users of the implant. They may be more susceptible to breakthrough bleeding because of the relative immaturity of their uterine lining. Older Implanon wearers experience much less additional bleeding.

Some Implanon NXT users become completely amenorrhoeic during some or all of the three years while others have regular, predictable bleeding.

The majority of Implanon NXT users will experience some form of bleed disruption and so pre-insertion counselling around this issue is essential to avoid unnecessary anxiety and early discontinuation.

The exact mechanisms of unscheduled bleeding associated with hormonal contraception are unknown. In a healthy menstruating woman there is an organised response to the drop in
circulating progesterone at the end of the luteal phase of the natural cycle.

For women using progestin-only contraceptives, bleeding occurs in a sporadic fashion from irregularly-distributed, abnormally-enlarged and fragile capillaries and venules embedded in a collapsed stroma.

Course Principal: Certificate and Diploma in Women’s Health, ICGP. Unscheduled bleeding may be an indicator of disease. Often, the only symptom of chlamydia or gonorrhoea infection at the cervix is irregular bleeding

There is superficial blood vessel fragility as well as local changes in endometrial steroid response, structural integrity and tissue perfusion, all of which may play a role in the pathogenesis of breakthrough bleeding.

Implanon NXT is notable for unscheduled bleeding. It may be that the relatively mild amount of progestin released from the device, while being more than adequate to block ovulation, is often too weak to inhibit endometrial shedding and can allow a lot of unscheduled bleeding in some users.

This is why it is often useful to trial a course of supplemental progestin to help promote a higher systemic level and hopefully prevent the breakthrough bleeding.

Alternatively, higher-dose IM progestin (as found in the 150mg medroxyprogesterone acetate injection known as Depo-Provera) may be offered before Implanon NXT insertion to help minimise the potential for breakthrough bleeding.

As the etonogestrel in Implanon NXT is a metabolite of desogestrel progestin, desogestrel tablets (as found in the pills Cerazette and Azalia) are frequently prescribed to try and suppress breakthrough during implant use.

Other treatment options (a discussion of which can be found on the UK Faculty of Sexual and Reproductive Health document Management of Unscheduled Bleeding in Women Using Hormonal Contraception) include: mefenamic acid, doxycycline and most effective of all, any combined oestrogen and progestin hormonal contraceptive.

Oestrogen is a powerful endometrial-binding hormone and if not contraindicated for use can help improve compliance with new implant users.

While it is most likely that breakthrough bleeding in a new Implanon NXT user is as a result of the progestin hormone itself, other possible causes must be considered and excluded in a timely fashion.

Prof John Guillebaud reminds us in his book Contraception Today to consider the many ‘D’s of breakthrough bleeding for women on hormonal contraceptives. Those that apply to implant wearers include:

Breakthrough bleeding may occur in Implanon NXT wearers as a result of drug interaction. Etonogestrel progestin is a substrate of the CYP3A4 oxidase system and so is susceptible to induction of this system. Many medications are inducers of CYP3A4 and increase the metabolism of etonogestrel, including: Some anticonvulsants including topiramate, barbiturates, St John’s wort, nevirapine antiretrovirals and rifampin.

Concomitant use of these medications can result in pregnancy in Implanon NXT users and so alternative contraceptives should be offered.

They may also create new or worsening breakthrough bleeding, which might alert the prescriber to a conflict. Other medications have been linked to reduction in the effectiveness of progestin contraception by an alternate mechanism.

Protease inhibitors such as modafinil, as indicated for narcolepsy and mycophenolate anti-rejection drugs, can reduce the plasma concentrations of etonogestrel so the use of Implanon NXT is contraindicated in women on these medications.

(Conversely, CYP3A4 inhibitors decrease the clearance of etonogestrel and increase plasma concentrations, thus raising the likelihood of progestin-related side effects. Oral antifungals like fluconazole and itraconazole may have this effect.)

While Implanon NXT is the most effective contraceptive available, it is not 100 per cent guaranteed and the possibility of a bleed in early pregnancy should be considered, no matter how remote.

It may even have been a situation where the patient was already pregnant when she attended for the insertion of her device — it is important to consider this possibility and perhaps try and out rule with a urinary pregnancy test before insertions.

Bear in mind that the urinary pregnancy tests available to most GPs do not reliably confirm a pregnancy within three weeks of the last unprotected intercourse.

Unscheduled bleeding may be an indicator of disease. Often, the only symptom of chlamydia or gonorrhoea infection at the cervix is irregular bleeding.

Women under 25 years and those with recent new partners are considered higher risk and should always be offered NAAT testing to be safe.

Other pathologies of the reproductive system may coexist in Implanon NXT wearers and so breakthrough bleeding that does not respond to hormonal manipulation within three-to-four months should be investigated by bimanual pelvic exam and inspection of the cervix.

Cervical polyps and uterine fibroids are possible causes of
unscheduled bleeding, as is cervical carcinoma.

The CervicalCheck programme does not begin until age 25 but cervical carcinoma may develop before this age and direct visualisation of the cervix is essential when assessing someone who has been sexually active and is experiencing breakthrough bleeding.

If the cervix appears suspicious in any way, referral to a colposcopy unit is advised — the taking of a smear test is not advised nor will it in any way help diagnose the possible causes of unscheduled bleeding.

The smear test is only powered to detect microscopic changes in the cervical nuclei that may predict future carcinoma.

It is not a diagnostic tool for period problems, STIs, pelvic pain or breakthrough bleeding, although many patients believe it is.

In summary, most unscheduled PV bleeding in Implanon NXT wearers is caused by the relatively low dose of the progestin that emerges from the implant and is usually correctable with one of a variety of additional medications.

If there are other elements in the history that indicate a high risk for STI or pelvic pathology, or if a trial of hormonal treatments for the breakthrough bleeding does not seem to be working, then gynaecological examination and further investigation is warranted.

A useful algorithm for the management of unscheduled bleeding in Implanon NXT wearers can be found on the FSRH site under www.fsrh.org/pdfs/CEUGuidanceProblematicBleedingHormonalContraception.pdf.

Or you can refer to www.icgp.ie/go/courses/wo and see ‘Irregular Bleeding’ under ‘Protocols & Forms’