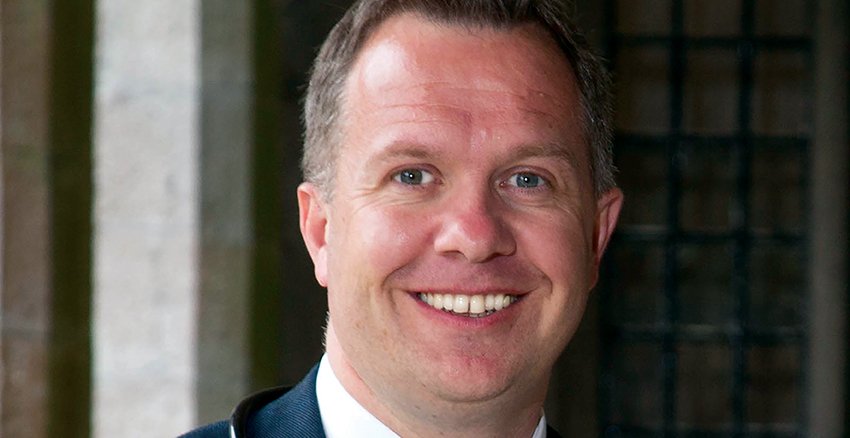 Sarah Gallagher speaks to Prof Derek O’Keeffe before his upcoming talk at the RCPI’s St Luke’s Symposium about holding degrees in engineering and medicine, his work with NASA, and the future of artificial intelligence

In October, the RCPI will be awarding Prof Derek O’Keeffe the inaugural St Luke’s Medal as part of the annual St Luke’s Symposium, where he will be delivering the St Luke’s Lecture. “This year they’ve decided to give it to me, which is fantastic, for this idea of trying to combine wearable technology and engineering and medicine and artificial intelligence,” Prof O’Keeffe told the Medical Independent (MI). “They see where we’re going with that thematic area and medicine.”

During the final year of his undergraduate degree in electronic engineering at the University of Limerick, Prof O’Keeffe took part in a project to help stroke patients to walk again using electrical stimulation. After this, he completed a Master’s degree in computer engineering and a PhD in biomedical engineering. He then undertook a postdoctoral degree in Harvard University in the US, before going on to study medicine in NUI Galway.

As someone who holds dual degrees, Prof O’Keeffe said that it has given him a slightly different point of view when approaching clinical problems than other doctors. He can draw upon his engineering knowledge in clinical practice at the bedside and “a lot of the projects I’ve done have kind of blended the two together”.

Last year, he led the team of group winners at the HSE Spark Ignite! Innovation competition. For this, the team developed the prototype of a hand-held device that detects whether or not a nasogastric (NG) tube is correctly placed in a patient’s stomach before they are fed.

They carried out an audit that showed patients wait between 12 and 24 hours to be x-rayed for their NG tubes. Prof O’Keeffe recalled seeing patients accidentally pulling out their tubes and waiting again for x-rays.

“I found that very frustrating and I remember thinking, three o’clock in the morning in a hospital, ‘there’s got to be a better way of doing this’. And I guess because I knew that about electromagnetics and so on, I was able to think ‘yeah, I think I can figure out how to do this’.” He said the team hopes to receive backing and regulatory approval for the device in the next few years.

His education in multiple fields has helped Prof O’Keeffe in his own career as an educator, and he is currently Professor of Medical Device Technology in NUI Galway, as well as a part-time clinician in University Hospital Galway. His role in the university is new; he took up his post last August. “The kind of person who applies for that role is kind of an unusual mix — when I say ‘unusual’, obviously I mean relative to current clinical practice, in that they were looking for somebody with a background in engineering and technology, who also had an interest in clinical care of patients.”

On the topic of his own education, he told MI “it’s [been] a long journey.”

“Along the way, one of the great things there’s been is that I managed to keep my research portfolio active during that time. I managed to supervise four PhD students and do research projects with NASA along the way. We put a project in space back in 2007 on the International Space Station, another one up on their lunar simulations up in the Arctic in 2010 and in the desert in the Mojave in 2013, and other projects, for example, that are based around the clinical scenarios that you might see as a doctor.”

Prof O’Keeffe described working for NASA as “amazing”. He continued: “But I guess NASA is just a group of people… with a shared objective. They don’t have better pencils, they don’t have better books or anything like that, they just have a shared focus and they have bright people there, and it was great…  A lot of times we have this perception that maybe we [in Ireland] don’t have anything to offer these agencies or this area of research, but Irish researchers are just as good as anybody else, if not better,” he said. “It was a really positive experience.”

His most recent involvement with NASA was as part of the NEEMO mission, which he spoke about in a recent TEDx talk. This mission comprised a team of aquanauts living in an underwater station off the coast of Florida, to prepare for future exploration in space. Prof O’Keeffe was part of the “top site” healthcare team, where they monitored the physical state of the aquanauts with the use of wearable technology. “In the simulation they put in a delay… of maybe 15 minutes or 10 minutes to mimic what it would be like if somebody was on Mars; that you don’t have that immediacy of access, which is an interesting concept psychologically.”

In his TEDx talk, he spoke about how mission decisions for the aquanauts were made based on collected data, such as choosing certain crew members to carry out tasks as they were better rested, or had a healthier body temperature. This, according to Prof O’Keeffe, is going to make its way into how healthcare is carried out “for good or for bad. The genie is out of the bottle with the technology… AI [artificial intelligence] is coming and it’s analysing data, which is what it’s good at, and finding patterns, and from those patterns it’s inferring what’s going to happen in the future.”

A telemedicine project, in the same vein as the work Prof O’Keeffe did with NASA’s NEEMO mission, is being pilot tested in Galway now. One of the participants in the pilot was a diabetic patient who was going through chemotherapy. By using telemedicine — keeping track of her blood sugars remotely and holding appointments via video conferences — Prof O’Keeffe said: “It saved them having to drive to the hospital for two hours and all that parking, and all the kind of physical and emotional overheads. We’re able to just pick a time, look at their data, see the patient and ask them what’s going on, and give them the advice then in 10 minutes — which is fantastic for her.”

Methods like this should ease waiting room overflows at older hospitals that can no longer accommodate the increasing population, according to Prof O’Keeffe. “Waiting lists just keep going up… You can’t keep putting the water in at one side of the pipe and having the pipe the same diameter.

“You need to try and find a way to take some pressure off the flow of the water.”

Prof O’Keeffe said he needs to remind other doctors that artificial intelligence and other emerging technologies are not going to replace clinicians, but aid them. In-person clinic visits still need to take place, but not necessarily for every appointment.

“Artificial intelligence won’t be the great saviour that everyone thinks it will be; it will be more like… a companion, and it will allow us to have a term that’s called ‘extended intelligence,’” according to Prof O’Keeffe.

“So we already know now that maybe 20 years ago you had to go ask somebody a particular piece of advice, whereas now we all have our smartphones, we just look it up… so it’s given us kind of extended intelligence.”

He said that the clinician will still very much be part of the decision-making process, but they will receive input from an artificial intelligence algorithm that has examined the data.

As well as this, he noted that it is important to be aware that artificial intelligence can carry practical and ethical issues of its own.

For example, with regard to dermatology, Prof O’Keeffe said “a lot of the artificial intelligence algorithms might’ve been trained on, for example, Western, American, Caucasian or black skin types, and if you use the same algorithm and you apply it in Indonesia or China, it’s not going to work as effectively.

“So you have to know how the AI algorithm was trained… and that’s going to be a part of it. And then also, who writes the algorithm? So when you write a computer programme, you write the rules, if that makes sense. But then you have your own inherent biases, even though you don’t know it as an individual.”