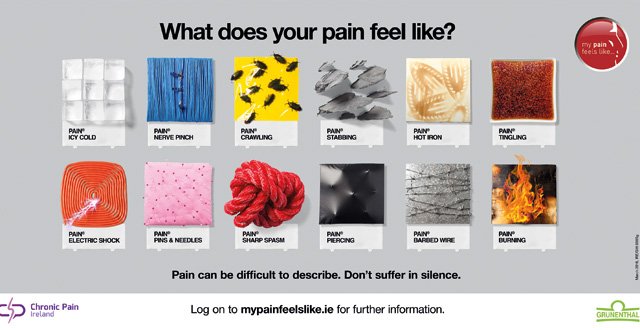 The International Association for the Study of Pain (IASP) defines pain as “an unpleasant sensory and emotional experience with actual or potential tissue damage, or described in terms of such damage”.1 According to Dr Paul Murphy, Pain Consultant in St Vincent’s University Hospital, Dublin, this definition is very important because it lets us see that “whilst it’s certainly an unpleasant sensation, there is no need for an abnormal result, no need for an abnormal scan or a MRI and individuals can certainly experience pain in the presence of normal investigations”.

Most sources agree that chronic pain begins at three months, with many studies demonstrating changes both within the function and within the structure of the nervous system after this time period. As Dr Murphy explains, “while most of us are familiar with ‘acute pain’ — often termed ‘useful’ pain, as it serves a very important protective, short-term function — chronic pain is typically defined as pain lasting in excess of 12 weeks. In many cases, it can be considered as ‘useless’ pain, as it serves no protective or beneficial purpose and instead leads to prolonged suffering”.

The impact of pain

Many healthcare professionals see first-hand the impact pain has on patients. As Mr John Lindsay from Chronic Pain Ireland explains: “Living with chronic pain affects people’s wellbeing, their ability to be independent, their productivity and relationships, which can lead to isolation, loneliness and depression. Pain affects everything and the effect is profound.”

Dr Murphy continues to say that “nerve pain has a major impact, primarily on the individual but also on family members and society as a whole. It can often be a very difficult condition to treat and therefore an early and accurate diagnosis for the individual is critically important”.

Research conducted by the ‘mypainfeelslike…’ campaign found that the impact of not adequately managing pain manifests itself in many ways, with loss of work and the ability to exercise or socialise being significantly diminished. Seventy-three per cent of respondents to the recent survey said their pain has a negative impact on their ability to exercise and 45 per cent said it affects their social life, with nearly half missing up to a week of work in the last year.2

The research also found that over half of people (52 per cent) living with chronic pain in Ireland feel frustrated when trying to describe their pain.2 Furthermore, 26 per cent delayed discussing their pain with their doctor, as they found it difficult to explain.2 “Many pain sufferers struggle to describe their pain and do not talk about it,” according to Mr Lindsay, leading to a “negative impact on their care due to misdiagnosis and inadequate treatment plans”.

The ‘mypainfeelslike…’ campaign, in collaboration with Chronic Pain Ireland and supported by MS Ireland and The Parkinson’s Association of Ireland, aims to raise awareness of chronic pain and support patients when communicating their pain with healthcare professionals.

Dr Murphy explains that “we as the medical profession need to be able to recognise and identify this problem, to diagnose it accurately and to offer appropriate treatments”. But as he says, there is a “trend among people with this disease to not describe their symptoms beyond severity when speaking with their doctor”.

The ‘mypainfeelslike…’ questionnaire — available on www.mypainfeelslike.ie — will help patients describe their pain when talking to their doctor, with the aim of supporting an accurate diagnosis and the development of a personalised treatment plan.

The campaign website also hosts a wealth of information on the different types of pain, videos of Irish patients and of Dr Murphy.

When asked about the difficulty people have describing their pain, Dr Murphy uses the example of neuropathic pain. “This type of pain is the result of a primary legion or damage within the nervous system and it’s a very specific subtype of chronic pain.

“Characteristically, individuals will experience a range of abnormal pains, such as shooting, burning, electric shock-like pain or a whole range of other abnormal sensations.”

To address this, the ‘mypainfeelslike…’ campaign has also developed a series of images, with artist David Schwen, that visually interpret pain symptoms such as burning, stabbing and ‘crawling’ under the skin. These images will be exhibited around Dublin and as posters in GP surgeries across the country.

“Chronic pain is now considered a disease entity in its own right,” according to Dr Murphy, and is “associated with a range of changes in nerve function, mood, cognition and social function”. In 2010, with The Declaration of Montreal, the IASP stated the access to pain relief should be considered a basic human right. Representatives and members from 129 countries turned their attention to the problem of unrelieved pain in a global setting. It was found that there was inadequate access to treatment for acute pain due to trauma and disease. Importantly, it was also declared that chronic pain is a serious chronic health problem requiring access to management akin to other chronic diseases, such as diabetes or chronic heart disease.3

When asked about this shift in care, Dr Murphy explains that “we’ve changed our clinical approach to pain in recent years following Montreal; we now treat chronic pain as a specific disease, much like any other disease process. This has led us to target not only the specific neurological problems, with pharmacological and other approaches, but also to identity the impact that this has on a psychosocial level with a patient and therefore helped us to embrace the input of clinical psychology, occupational therapy and other services.”

1. International Association for the Study of Pain. Hyperlink: http://www.iasp-pain.org/Taxonomy.

2. Survey by Empathy Research on behalf of Grunenthal based on 501 Irish sufferers of chronic pain aged 18+ in January 2016.