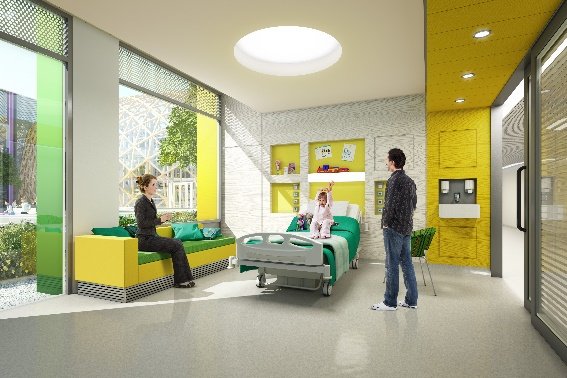 The plans include those for the hospital as well as for the two paediatric OPD and urgent care satellite centres planned at Tallaght Hospital and Connolly Hospital, Blanchardstown.

Overseen by the National Paediatric Hospital Development Board (NPHDB), the design team led by architect firm BDP with Irish partners O’Connell Mahon Architects (OCMA) has carried out intensive work over the past 12 months.

Minister for Health Leo Varadkar said the plans are “spectacular” and the design is “iconic”. He described the €650 million development as the largest single investment in Irish healthcare and said work would get underway in the New Year, subject to planning permission. It is expected to be fully operational in 2020.

A previous plan involving the children’s hospital being built at the Mater Hospital was rejected by An Bord Pleanála.

According to Ms Eilísh Hardiman, Chief Executive of the Children’s Hospital Group, the designs for the hospital and satellite centres have been “optimised to ensure that services are delivered in the best possible environment”.

Speaking about the submission of the planning application, Mr John Pollock, Project Director, NPHDB said: “Over the last number of months we have listened to the needs of the staff in the hospitals and integrated them with the needs of families and children to deliver a design that works for all. At all times, we have also taken the views and concerns of local residents into account and believe that we have designed plans for a building of which everyone can be very proud.”

According to the NPHDB, a central objective is that there is an economic and social benefit for the Dublin 8 residential and business communities.