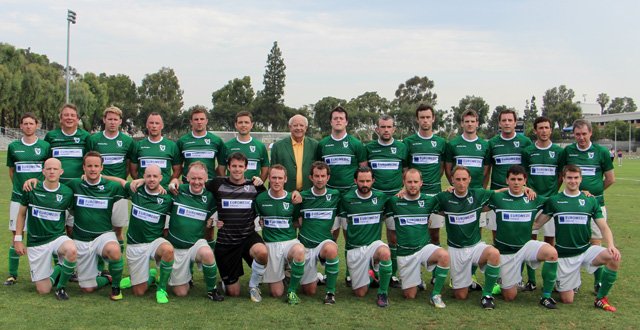 We had a great week here in LA, taking a break from the hospitals and clinics and pretending to be real footballers for a short while. We put in six months of hard training in preparation for the tournament and were confident heading out that we could represent ourselves with pride. The opening draw saw us in a cruel group involving the defending champions from the past two years — Brazil and Germany, as well as the Ukraine. Nonetheless, we approached each game with the belief that our passion and graft would make us difficult opposition.

Our opening affair was a tense game against Brazil. The foundation of our team was a well-organised and mean defence. Pressurising their midfield and not allowing them time on the ball, we knew we could minimise their attacking threat. With 15 minutes to go, we struck for a memorable 1-0 win. Aidan McGrath with the goal from a well-worked set piece.

The second game was a physical encounter against the Germans. Our game plan remained the same and after a training ground move, Ronan Cassidy got on the end of a corner to nod in the winner for a deserved 1-0 victory.

With six points on the board, a result in our final group game against Ukraine would see us safely through to the knockout stages as group winners. An early opportunistic strike by the Ukrainians left us chasing the game. We dominated possession and our sustained pressure was finally rewarded towards the end, as a bullet header from Kevin Sheahan ensured the point needed to top the ‘group of death’.

Next up was the pre-tournament favourites Czech Republic in the quarter-finals. It was a tense and physical battle, with few clear chances. It looked like a penalty shoot-out would be the only way to separate the sides until an excellent late strike from outside the box rocketed into the bottom corner to end our dreams of winning the tournament.

After defeat against the Czechs, we entered the consolation rounds and were re-matched against Brazil. In a much more free-flowing affair than our opening tie, some excellent intricate play from the Brazilians allowed them to earn a 2-0 victory that reminded us of their innate flair for the beautiful game.

A final day 7th/8th play-off against Great Britain was just the antidote needed to end the competition on a high. In what was our most impressive display of the tournament, we began on the front foot and it did not take long for Kerry O’Connell to put the ball in the net. This was followed shortly after by a stunning 25-yard pile-driver from Ian Daly. The result was put beyond any doubt in the second half by another headed goal from our top goal-scorer Kevin Sheahan, to earn us a 3-0 win.

We will look back on this tournament with great pride at what we have achieved in our first World Cup.

We have learned a huge amount and look forward to going to Barcelona in 2016 with genuine title ambitions. It was a week in which lifelong friendships have been forged and incredible memories created.

We would like to thank all those at home, including our sponsors Euromedic and our friends and families, whose kind messages of support and encouragement were a huge source of inspiration throughout the week.

The World Medical Football Championships ran alongside the 2015 Global Conference on Medicine and Health in Sport, from 27 June to 4 July in Long Beach, California, US. All players had to be qualified doctors.

For more information on the team see www.irishmedicalfootball.com