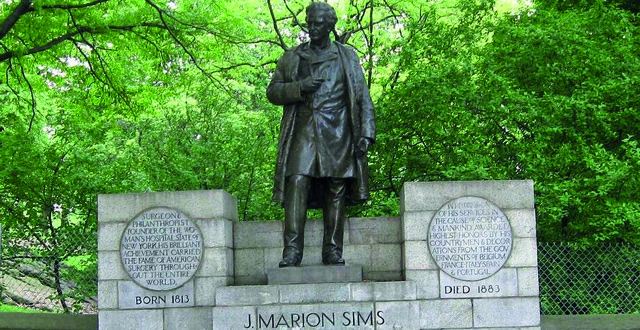 A statue to the 19th Century American surgeon James (J) Marion Sims, often hailed as the father of modern gynaecology, has become a flashpoint in the controversy sweeping the US over statues commemorating figures from the country’s troubled history.

Dr Sims, whose origins were partly Irish and who was once feted at the Rotunda Hospital during a visit to his “beloved Dublin”, founded the first hospital for women in America in 1855 and was once President of the American Medical Association.

But now his statue overlooking New York’s Central Park has become a flashpoint for protesters who want it taken down because they say his work involved experiments on female slaves without their consent. Others defend his record by placing it within the context of his time.

Dr Sims is credited with developing a surgical technique to repair certain types of fistulas, which were then a severe complication of obstructed childbirth. He developed the technique through operations on a group of enslaved black women in Alabama between 1845-1849.

The three slaves on whom he mainly operated are known only as ‘Lucy’, ‘Betsey’ and ‘Anarcha’. No other personal details appear to have survived, although Anarcha was believed to be aged 17 years.

We do know that between late 1845 and the summer of 1849 at a small hospital beside his house at Montgomery, Alabama, Dr Sims carried out repeated operations (without anaesthesia) on these women in an effort to repair their injuries. Anarcha had a particularly difficult combination vesicovaginal and rectovaginal fistula and underwent 30 operations before Dr Sims was successful.

The New York statue of the pioneering doctor is one of a number of monuments in the country honouring him. Another stands at the State House in the city of Columbia in his native state of South Carolina.

The ongoing protests over Dr Sim’s New York memorial are part of a wider debate in the US on the appropriateness of some statues, particularly ones honouring those on the losing Confederate side in the 1861-1865 American Civil War over slavery and states’ rights.

The debate grew louder after the violence that saw a woman killed during a white supremacist rally in Charlottesville, Virginia, on 12 August, which was partly over an attempt to remove a statue of Confederate Army commander Robert E Lee.

Soon, statues to other prominent figures also became part of the discussion. Some African-Americans incensed by Dr Sims’s history of medical experiments on enslaved women took their protest to the streets of New York on August 19.

The Black Youth Project 100, an activist group founded in 2013, staged a protest outside the New York Academy of Medicine, of which Dr Sims was once a member.

The protest organiser, Seshat Mack, told the Huffington Post that she thought it was important for Americans to face-up to all the details of the ugly history of slavery in their past.

“Memorialising white supremacy is an American problem,” Ms Mack said, “and it’s a problem that we need to reckon with as a country. We cannot overlook the fact that J Marion Sims’s discoveries on enslaved black women’s bodies led to the foundation of modern gynaecology.”

The use by Dr Sims of enslaved African-American women as subjects for his work has been questioned in recent years by some medical historians.

Writing in the Journal of Urology in June 2011, authors Sarah Spettel and Mark Donald White of  the Division of Urology, Department of Surgery, Albany Medical College, New York, described Dr Sims as “a prime example of progress in the medical profession made at the expense of a vulnerable population”.

Others have defended his contributions. Among them is Dr L Lewis Wall, Professor of Obstetrics and Gynaecology at Washington University. Writing in the Journal of Medical Ethics in June 2006, Dr Wall emphasised Dr Sims’s conformity to accepted medical practices of the time, the therapeutic nature of his surgery and the catastrophic nature for women of the condition he was trying to address.

“It is difficult to make fair assessments of the medical ethics of past practitioners from a distant vantage point in a society that has moved in a different direction, developed different values and has wrestled — often unsuccessfully — with ethical issues of sex, race, gender and class that were not perceived as problematic by those who lived during an earlier period of history.

“J Marion Sims was a dedicated and conscientious physician who lived and worked in a slave-holding society. The operations carried out by Sims on black slave women from 1845-1849 represented his attempt to cure them of an odious and devastating condition that was then considered incurable.”

Dr Sims was born in Lancaster County, South Carolina, in 1813. His father, John Sims, was a descendant of English colonists and his mother was of Irish origin. He wrote of his mother in his autobiography The story of my life: “My mother Mahala Mackey was the daughter of Charles and Lydia Mackey of Scotch-Irish origin. The family came to America about 1740.”

He graduated from Jefferson Medical College, Philadelphia, in 1835. He practised surgery in Montgomery, Alabama. He moved to New York in 1853 and two years later he founded the Women’s Hospital, the first hospital for women in America.

In 1861, at the outbreak of the American Civil War, Dr Sims moved to Europe, where he worked on several fistula patients in London, Paris, Edinburgh, Brussels and Dublin. “Here I am again in my beloved Dublin”, he wrote in his autobiography. At the Rotunda Hospital, he was “dined and feted to satiety”.

In 1863, he was summoned to France to treat Empress Eugenie, wife of Napoleon III. His fame spread and soon honours and medals were heaped on him for his successful operations in many countries.

In 1871, Dr Sims returned to New York. From 1876 to 1877 he served as President of the American Medical Association. Three years later, in 1880, he contracted a severe case of typhoid. He recovered, however, in 1881. But then, in September of the same year, he increasingly began to complain of heart problems. On November 13, 1883, at the age of 70, he died in New York of a heart attack.

Among those calling for the Central Park statue to be removed is New York City Council Speaker Melissa Mark-Viverito, who declared emphatically at a news conference on August 21: “We must send a definitive message that the despicable acts of J Marion Sims are repugnant and reprehensible.”

A week earlier, the African-American Mayor of Columbia in Sims’s native South Carolina, Steve Benjamin, said he believed the most offensive statue on the state’s capitol grounds was that of Dr Sims. “It should come down at some point,” he said on MSNBC.

But others say his life and work should also be seen in the context of a different time when the cruelty of slavery was part of the fabric of America. Electric shocks, brain surgery and amputations were some of the medical experiments widely performed on American slaves in the mid-1800s, according to a survey in 2015 of medical journals that were published before the country’s Civil War.

The March 2015 survey, published in Endeavour, a journal on the history and philosophy of science, concluded that a widespread network of medical colleges and doctors across the American South had carried out and published slave experiments for decades.

Yet modern medicine has undoubtedly benefitted from some aspects of such historical research, and as the beneficiaries, it is surely incumbent on us to honour not just the doctors and researchers involved, but also the vulnerable women and men, and in some cases children, who were their subjects and without whom many of the medical advances we have today would never have been possible.

At the very least, perhaps, their story and their contribution must be openly acknowledged in the narrative about pioneers like Dr Sims.

Prof Vanessa Northington Gamble, who has worked in Harvard School of Public Health and Johns Hopkins University, put it like this on US National Public Radio: “When I see the statues and the memorials to Sims, what I see is what’s not shown. One of the things that’s missing are the words and voices of the women themselves.

“So that’s part of the problem. We can say that some of these surgeries that he did, women today are benefitting from, especially in poor countries. But at the same time, we can’t forget how that came to be.”

Asked what might be chiselled on any memorial honouring his patients, Prof Gamble said: “I think what the inscription would say is ‘Betsey, Anarcha and Lucy, the mothers of modern gynaecology’.”