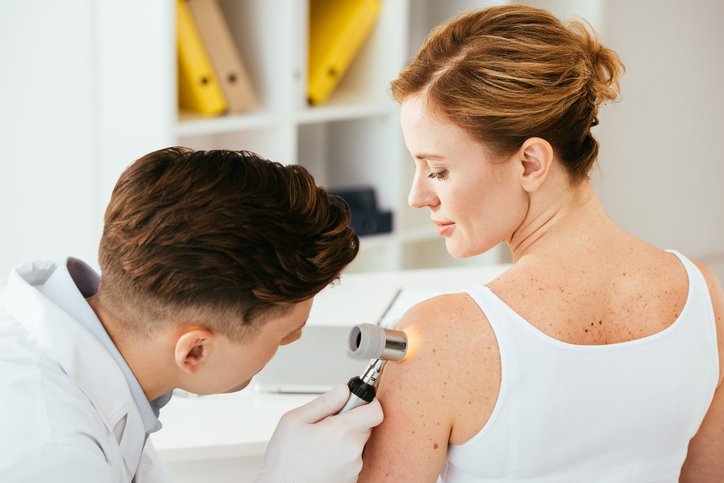 The series, which is part-sponsored by RELIFE (part of the A.Menarini group), is designed to provide expert advice from a range of distinguished national and international experts in their respective fields and is chaired by Prof Desmond Tobin, Full Professor of Dermatological Science at UCD School of Medicine and Director of the Charles Institute of Dermatology. The seminars are broadcast to attendees with a special interest in dermatology and cutaneous science in other locations, who access the talks remotely via an audio-visual link.

Attendees heard a presentation from Dr Shirley Potter, Consultant Plastic and Reconstructive Surgeon at the Mater Misericordiae University Hospital in Dublin, where she is lead melanoma surgeon and co-chair of the skin cancer multidisciplinary meeting. Dr Potter also has a special interest in microsurgery simulation and is renowned as a surgical educator, serving on the faculty of trainers for core and higher surgical training schemes at the Royal College of Surgeons in Ireland.

During her presentation, Dr Potter discussed cutaneous neoplasms, including melanoma and non-melanoma skin cancers, among which basal cell carcinoma and squamous cell carcinoma are the most common lesions. While accounting for less than 5 per cent of all skin cancers, malignant melanoma causes most deaths due to skin cancer, and is one of the most aggressive human malignancies. In contrast to other cancers worldwide, the incidence of melanoma continues to increase.

Dr Potter explained that despite significant advances in adjuvant therapies, surgery remains the cornerstone for skin cancer treatment and she outlined the typical treatment pathway for a patient with skin cancer, from diagnosis right through to the follow-up stages.

Dr Potter also highlighted some of the clinical challenges typically encountered in the clinic that could be resolved with the help of translational research, using both her expertise as a clinician and her interest in laboratory-based studies as a PhD researcher.

During her talk, titled ‘Plastic and Reconstructive Surgery Approaches to Skin Cancer’, Dr Potter told the attendees that skin cancer comprises approximately 50 per cent of her surgical practice and she pointed out that melanoma is one of the most aggressive human malignancies due to the striking and unique properties of melanoma cells.

“Many of the clinical challenges we are faced with are due to the aggressive properties of these melanoma cells,” she told the seminar. “Firstly, they display a high genetic instability. Melanoma cells have the highest mutational load of any human tumour, with 80 per cent displaying UV signatures,” said Dr Potter.

“They display pathway plasticity and they can reactivate signal transduction pathways or divert activity from one pathway to another in order to avoid cell death, thereby allowing them to survive. A key example of this is BRAF mutant cells, which are treated with BRAF inhibitors; the MAP kinase pathway can be reactivated within hours in vitro and within weeks in patients, leading to resistance and potentially mortality.” This topic will be the focus of an upcoming lecture in this series by Dr Jens Rauch.

They can also de-differentiate to a variety of stem-like states under stress and show “a remarkable ability” to survive in hostile environments, such as in the systemic circulation, which again drives resistance and mortality, Dr Potter told the attendees.

“They display remarkable self-renewal abilities and they have an intrinsically high self-renewal capacity, with just one cell being able to constitute an entire heterogenous tumour when implanted into mice. Most other tumours need several hundred or thousands of cells to reconstitute a tumour,” she explained.

“They also display stromal mimicry, in that they have the ability to produce and secrete growth factors and cytokines that are normally derived from stromal support cells, and therefore form autocrine loops to keep themselves alive and maintain viability.”

In addition, this remarkably aggressive disease can reprogramme adjacent stromal cells to secrete pro-tumorigenic factors that promote tumour aggressiveness in a paracrine manner, Dr Potter added. In addition to giving them the ability to survive in the circulatory system, however this aggression also allows them to survive ex vivo, and therefore can form cell lines and patient-derived xenografts, Dr Potter explained.

She outlined the risk factors for developing melanoma and differentiated the various types of sun exposure risks, such as multiple sunburns and UV exposure from sunbeds in the early stages of life, with blistering-type sunburn, but also chronic sunburn, with each giving rise to different types of melanoma. She touched on how people with fair skin and red hair are at particular risk, as well as people with five or more moles larger than 5mm.

In addition, people with giant melanocytic naevi over 20cm have a 5-to-20 per cent increased risk of developing melanoma. Other risk factors include a history of a previous melanoma, family history (especially two first-degree relatives), and a history of a non-melanoma skin cancer and immunosuppression also leads to a risk of all types of skin cancer, she told the attendees. A significant proportion of people who develop melanoma are aged under 50 years, Dr Potter added, with males tending to develop melanoma on their trunk and females more likely to develop them on their legs.

Dr Potter presented case studies to illustrate the typical disease course and treatment pathway and explained that melanomas from chronic sun damage have a later stage of onset and occupy anatomical sites with the highest rates of sun exposure, such as the head and neck. Non-chronic sun damage melanomas, such as from blistering sunburns in early life and exposure to sunbeds, are often associated with naevi or pre-existing moles and have comparatively lower mutation burdens, and generally occupy other areas of the body.

One of the challenges in clinical practice, she told the seminar, is determining which precursor lesions or benign naevi may transform into melanoma, as it is not feasible to surgically excise all lesions.
Typical features that Dr Potter and her team see in a pathology report can be quite varied, “but the most important being Breslow thickness, but we also have the margins of excision, ulceration, mitotic rate, and whether it is node-positive or node-negative,” said Dr Potter.

However, “dermatopathology is one of the most difficult areas of pathology,” she added. “Our MDT pathologists tend to specialise in skin pathology; which is a very subjective area and if you put something like a lentigo malignant melanoma in front of five different pathologists, you may get a number of different reports back, so it is highly subjective. That’s important to note, because we are basing a lot of our treatment decisions on these reports and I think that reflects the high variability and heterogenous nature of this disease.”

Dr Potter also gave a brief outline of the importance of Breslow thickness [depth of the melanoma from the surface of the skin down to the deepest point of the tumour] and ulceration, both of which are vital in assessing the severity of disease, and provided an outline of a number
of research papers, as well as an overview of the staging process.

“Melanoma cells will travel to the lymph nodes but at the same time, they can also travel in systemic circulation to the lungs and brain. This has become evident because now we know that by removing these lymph nodes, we are not making a difference to overall survival and also, in patients with positive lymph nodes and no other disease, circulating tumour cells have been found and these are obviously continuously seeding metastatic sites and spreading further,” said Dr Potter.

Another treatment challenge in melanoma is dormancy, she explained. “It’s well known that when melanoma cells are shed from the primary tumour, they can remain dormant as micro-metastases for periods of time ranging from a couple of years to decades,” she told the seminar.

“We sometimes see patients who had melanoma 20 or 30 years ago and it suddenly comes back. There is growing evidence to support the influences that melanoma stem cells’ plasticity and stem cell-like properties have on dormancy, where these tumour cells become quiescent. We don’t really know what causes them to reawaken but by reawakening, they become susceptible to immunological and targeted therapies that we can use.”

With regard to treatment advances, Dr Potter described melanoma as the “poster child” of modern cancer treatment efforts and said it is an example of where intensive research has led to major discoveries that have now been applied to most fields of cancer.

“The development of targeted therapies such as BRAF and MEK inhibitors and immunotherapies, where we activate the cytotoxic immune system to target melanoma cells, have contributed profoundly to increased survival of melanoma patients who, until about 10 years ago, had no real treatment options after surgery or if they did, they were cytotoxic chemotherapies that made very little difference to overall survival,” she told the attendees.
Dr Potter concluded:

“It is obvious that melanoma is an aggressive skin cancer; it is also highly heterogenous and we don’t yet know very much about it,” she said. “It is largely preventable, and surgery is still the mainstay of treatment. There are significant challenges in this area and this is where I feel research will come to the fore and there have been, thankfully, some practise-changing developments in this space recently.”

During an interactive Q&A session, Prof Tobin noted that on the one hand, Irish people are advised that sunlight is an important source of vitamin D and for boosting endorphin levels, and so paradoxically, sunlight is the only element on the WHO’s list of carcinogens that also provides health benefits. He also referred to the insidious manner in which melanoma spreads, whether that be through the circulatory or lymphatic systems, or both, and so the enormous clinical difficulties this presents. In this regard, he asked: “What of the possibility for us to have exhibit nodal naevi without first having experienced melanoma?”

Dr Potter responded: “It is possible, and that is a phenomenon in a lot of different diseases – it is not just particular to melanocytes,” she said. “Leiomyoma and lots of other different things will in fact migrate to nodes, for example.”

Prof Tobin also explained that he and Dr Potter are in the process of developing an all-island of Ireland melanoma special interest group to bring together stakeholders in all aspects of melanoma research, including laboratory researchers, oncologists, pathologists, surgeons and patient representatives, among others, and this initiative is expected to be formally launched in early 2021.