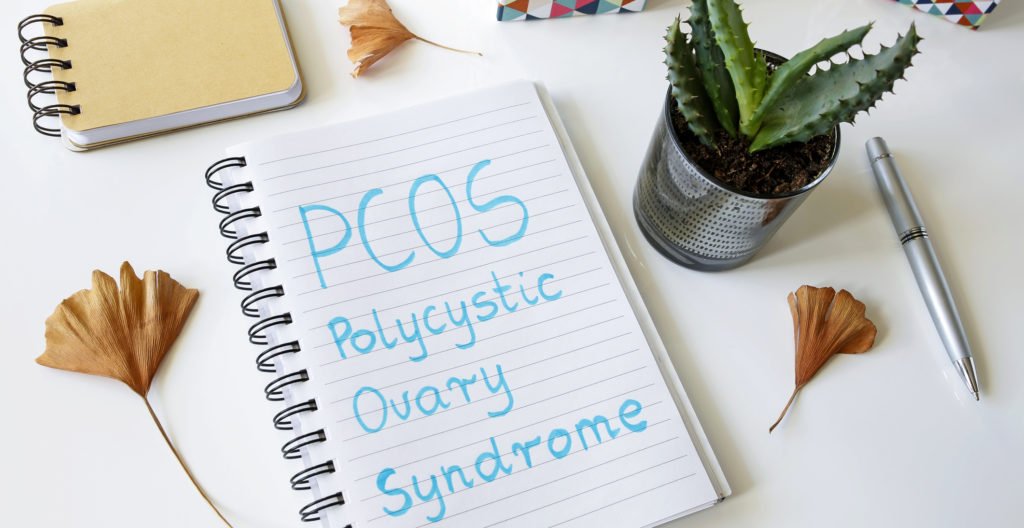 PCOS is common, affecting an estimated one-in-10 women. It can cause period problems, reduced fertility, excess hair growth and acne. Many women with PCOS are also overweight.

The aetiology of PCOS remains unknown. Increased frequency of hypothalamic release of gonadotropin-releasing hormone (GnRH) is found in women with PCOS. It is unclear if this defect in GnRH pulse secretion is a primary or secondary abnormality.

Increased frequency of GnRH favours the secretion of luteinising hormone (LH) versus follicle stimulating hormone (FSH) from the anterior pituitary so that LH pulses also increase in frequency and amplitude.

The ovary in PCOS responds to the LH stimulation with a preferential increase in the production of androgens versus oestrogen. Low circulating progesterone as a result of oligo-ovulation and elevated androgen levels create a feedback that further potentiates  inappropriate hypothalamic pituitary gonadotropin secretion and leads to a vicious cycle.

PCOS is a diagnosis of exclusion and other treatable conditions also with hyperandrogenism should be excluded, such as Cushing’s syndrome, androgen-producing tumours and non-classical congenital adrenal hyperplasia.

The minimum criteria to diagnose PCOS are two of the three following:

Clinical or biochemical evidence of hyperandrogenism.

The specific ultrasound characteristics are presence of 1.2 follicles in each ovary measuring 2-to-9mm in diameter and increased ovarian volume and stoma. Only one ovary with these criteria is sufficient.

These ultrasound criteria do not apply to women on oral contraceptives.

If there is evidence of a dominant follicle, the scan should be repeated.

Evidence suggests that PCOS may be hereditary, but the pathogenesis of the syndrome points to a complex multigenic disorder.

Candidate genes that may be responsible for alterations in ovarian, hypothalamic and insulin receptor function have been the focus of linkage and case control studies.

It has also been suggested that prenatal androgenisation of the female foetus induced by genetic and environmental factors, or the interaction of both, may programme differentiating target tissues towards the development of PCOS phenotype in adult life.

The chronic oestrogenic stimulation seen in PCOS results in endometrial hyperplasia and dysfunctional uterine bleeding and may lead to endometrial carcinoma.

The first-line treatment for overweight and obese patients with PCOS should be weight loss and lifestyle modification.

The mainstay of treatment of oligomenorrhea/amenorrhea includes a combination oral contraceptive preparation that contains low-dose ethinyl estradiol, in conjunction with a progestin with low androgenic activity or even anti-androgenic activity.

An anti-androgen may be added for additional benefit in controlling hirsutism when this is the main complaint.

Clomiphene citrate has been shown to be superior to metformin in achieving ovulation but has a risk of multiple pregnancies. Combinations of clomiphene with metformin may increase pregnancy.

If pregnancy is not achieved, consideration can be made for the use of injectable gonadotropins or in vitro fertilisation (IVF).

There needs to be a greater public awareness that patients with PCOS are at high risk of developing gestational diabetes, pregnancy-induced hypertension, pre-eclampsia and preterm labour.

Studies have shown that a longer or irregular menstrual cycle length can lead to a two-fold increase in the risk of hypertension in women with PCOS.

The prevalence of hypertension increases dramatically by the time of peri-menopause.

Women with PCOS also have an increased risk of dyslipidaemia and have been shown to have abnormal vascular function, higher rates of coagulopathy and increased markers of inflammation.

Whether women with PCOS and metabolic syndrome are at increased cardiovascular risk remains a question for future investigations, although predictions of a seven-fold relative risk for myocardial infarction have been made.

Sleep apnoea also occurs at a higher incidence with PCOS.

If overweight, even a small amount of weight loss can improve PCOS symptoms. Between 5-to-10 per cent loss of total body weight can help normalise menstrual cycles, regulate blood sugar and increase a woman’s chances of conceiving. A weight loss of between 1-to-2lbs (1/2-to-1kg) a week is a safe and practical target. However, a healthy diet is beneficial to all women with PCOS, even if not overweight.

This will help to keep insulin levels stable throughout the day. Eating often can also help to control appetite. Pre-planning meals is also a key component of this.

This includes eating lots of fruit and vegetables, choosing low-fat dairy foods and lean meats and fish. It is also critical to limit the amount of fatty, sugary and processed foods and drinks consumed.

There have been a number of studies suggesting that a lack of vitamin D leads to insulin resistance. Supplementing with vitamin D may help to prevent this, however more research is needed before this can be confirmed.

It is critical to avoid high-sugar foods with PCOS. Eating less sugar results in lower blood glucose levels. This decreases insulin levels and reduces male hormone levels. Most women with PCOS crave sugary foods, even after eating meals. This is due to increases in insulin.

Managing stress levels is an important part of dealing with PCOS.  Stress can worsen PCOS symptoms by increasing testosterone, which can increase insulin resistance.

Exercise is also a great way of reducing stress levels and simultaneously targeting weight. There are many benefits to be gained from being physically active, including improving insulin resistance. At least 30 minutes of moderate-intensity physical activity most days of the week is advised. For weight loss, additional physical activity may be needed.

Women with PCOS are more likely to develop poor respiratory health based on lung function tests, according to research presented at the 2019 European Respiratory Society International Congress.

The new study suggests that PCOS may also be responsible for lower lung capacity in some women, which may lead to shortness of breath.

The research was presented by Dr Diana van der Plaat, a RESPIRE 3 fellow based at the National Heart and Lung Institute, Imperial College London, UK. She said: “We tend to think of lung diseases, like chronic obstructive pulmonary disease (COPD), as being more common in men and in smokers. But a striking proportion of COPD patients have never smoked. In recent years, there has been an increase in lung disease and deaths from lung disease in women, and we want to understand why.

“This work is part of a big study looking at hormonal factors and lung health in women. PCOS is very common so it’s important to find out whether this condition is associated with poor lung health.”

In each woman, lung function was tested with a spirometer. Researchers used genetic variants associated with PCOS to investigate whether PCOS can cause poor respiratory health based on these lung function tests.

The results suggest that women with PCOS were around 10 per cent more likely to have lower lung function, compared to other women.

Dr van der Plaat explained: “We use genetic variants as a proxy for PCOS because these genetic variants are there from the moment a person is conceived, and they do not change over the life course. This means that we can investigate the causal relationship between PCOS and lung function and show that the trend we see in women’s breathing is likely to be caused by PCOS, rather than the other way around.

“We found that women with PCOS have a small increased risk of having impaired lung function. Poor lung function can cause difficulty in breathing and inadequate exchange of oxygen to the blood or carbon dioxide from the blood.

“This research highlights the fact that PCOS can affect different parts of a woman’s body, not only her reproductive organs. We need to do more research to understand why women with PCOS also have poorer lung health.”

While the study does not explain why PCOS and lung function might be linked, the connection may relate to insulin levels and diabetes. Women with PCOS are known to face a higher risk of diabetes and this in turn has been linked with lower lung function.

Prof Daiana Stolz, from University Hospital Basel, Switzerland, is Chair of the European Respiratory Society Education Council and was not involved in the study. She said: “PCOS is a common condition, so it’s important to know if it is linked to lung health. Doctors need to be aware that women with PCOS may be at a higher risk of having poor lung function, which might require follow-up and treatment.”