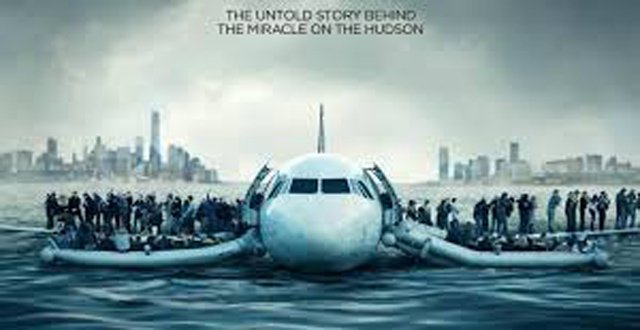 The last comments of the movie were the funniest. The co-pilot Jeff Skiles was asked by the equivalent of the Medical Council in this very public hearing: “Was there anything you would have done differently if you were the pilot, rather than the co-pilot?” Surely this is the point where the co-pilot is being given a chance to hang his pilot. He replied, without hesitation: “If I was doing it again, I would do it in July.”  The audience laughed as the tension in the room was broken. They all knew that January was not a good time to land a plane on water in New York.

US Airways Flight 1549 landed on the frosty waters of the Hudson River on 15 January 2009 and all 155 survived. If the catastrophic event of losing two engines on the Airbus plane over one of the most densely populated cities on earth was not bad enough, for many it was a reminder of the horror of 9/11. It must have been surreal to look out your office window and see a large plane passing by and getting lower as it headed for the Hudson. The fact was that this time there was no tragedy but in fact a miracle. People could not understand how the pilot Chesley Sullenberger, nicknamed ‘Sully’, could have landed safely.

But it was not this aspect that drew me to drive out of my way to see this movie, upstairs in a small theatre that seemed to come from the 1950s. Called the ‘Balcony’, it is the venue for a cinema club in Mountmellick, Co Laois. It is a town that used to be called the ‘Birmingham of Ireland’ and was a hub of activity guided by the industrial culture and honesty of the Quakers.

An aspect that particularly tickled my fascination with the film was how a committee of inquiry would deal with Sully and his staff. The whole world was in awe of him for saving 155 lives, yet the committee came with the attitude that he put lives at risk. Should he not have turned around when his two engines went dead after a flock of birds flew into both engines? Should he not have headed for either La Guardia or Teterboro and landed safely rather than putting their lives at risk, even though no-one was actually lost in vivo?

The computer showed that they could have got to either airport if the plane was turned as soon as the birds struck. But Sully convinced them that computers did not leave any room for human response and if they had in fact done as the computer had dictated, then in all circumstances the plane would have crashed, with many lives lost.

From beginning to end, the Sully saga lasted six minutes: Hit by birds 90 seconds into the flight, two engines dead two minutes into the flight, and a decision made to land in the Hudson. Three-and-a-half minutes more before landing safely and impossibly. Strangely, this six minutes is the same amount of time many GPs have to see each patient in a long working day and I think the skill and miracle is of equal measure. After 90 seconds, we get a sense of a diagnosis and then make a decision at two-and-a-half minutes, and have three-and-a-half minutes to take action and ‘land’ the patient safety out the door with a plan, prescription or an ambulance.

Sully said the hardest thing was realising that after 40 years of service and experience, his career hung on the line and he was going to be judged on 208 seconds. Doctors’ years of night calls and training, their dedication to an impossible public expectation, all forgotten in the context of a medical decision that with the wisdom of the ‘retrospectoscope’, may have been dealt with differently.

Reading a book before a movie is often a great idea. I first fell in love with the practice after seeing The Commitments a few days after reading the book. This time I read Fly by Wire: The Geese, the Glide, the Miracle on the Hudson by William Langewiesche.

Langewiesche explains that the war between human error and computer expertise in the air was won when Airbus from Europe beat their old American rival manufacturer, Boeing. Airbus started to design planes using completely new metaphors and ideas. Airbus planes are built with the belief that the plane and the computer knows best, and while the pilot is given some latitude to make decisions, these are within computer-generated limits that give the best chance of a safe outcome in difficult flight scenarios. Langewiesche claims that it was Airbus that saved these people’s lives, more so than Sully.

While many passengers and others thought Sully was a hero, the wheels of an inquiry rolled on for multiples of the time Sully had to make his life-saving decisions. This movie by director Clint Eastwood gave the impression that this inquiry was about laying blame on the human factors. Because as any idiot knows, computers get it right every time. Even when they get it wrong.