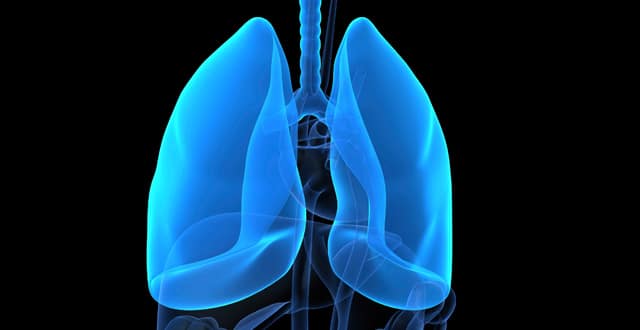 An 83-year-old woman presented to her GP with a cough for four weeks. Referral was made to the rapid access lung clinic following identification of a right upper lobe lesion on chest radiograph.

A CT thorax and visit to clinic was scheduled for the following week. In the clinic she reports being an ex-smoker of 10 years with a 50-pack-year history and worked in the family newsagent business until retirement. She has a history of osteoarthritis and high cholesterol. She is active and walks 30 minutes a day with her dog.

A 66-year-old man presented to the emergency department, accompanied by his wife, with increasing confusion of one-week duration. Admission laboratory investigations demonstrated hypercalcaemia accompanied by a right lower lobe opacification on chest radiograph. On questioning he had experienced recent hemoptysis. He is a current cigarette smoker and has a significant family history of lung cancer.

His case was discussed at the lung MDT on the day of clinic review and CT guided sacral biopsy was arranged to confirm stage IV metastatic disease.

Analysis of sacral core biopsy demonstrated high PD-I levels. He was referred to medical oncology and commenced on immunotherapy with pembrolizumab. @font-face

On 12 October 1492, Christopher Columbus set foot for the first time on the beach of San Salvador Island. The indigenous Arawaks, possibly thinking the strange visitors divine, offered gifts. Columbus wrote in his journal: “The natives brought fruit, wooden spears and certain dried leaves, which gave off a distinct fragrance.” The fruit was eaten; the pungent “dried leaves” were thrown away. Over 400 years later, in 1901, the Imperial Tobacco Company of Great Britain and Ireland Ltd was born. Tobacco is now responsible for around 2,000 new cases of lung cancer per year in Ireland.

The National Cancer Registry Ireland (NCRI) has collected data on lung cancer since 1994. Since 1994 the incident rate has declined progressively in men with an annual percentage change of -0.8 per cent, whereas in women it has increased significantly at 2.2 per cent annually over the same period. This is largely explained by differences in the tobacco epidemic experienced by males and females, with smoking becoming more prevalent among females in the late 20th century.

Lung cancer is now the leading cause of cancer death in Ireland, comprising 18 per cent of cancer deaths in women, and 22 per cent in men during the period 2010-2013. It is the fourth most common invasive cancer in Ireland and accounts for 11 per cent of all cancers. On average, 2,279 new lung cancer cases were diagnosed per year from 2011-2013, with the majority (56 per cent) occurring in males. It is a devastating disease with one-year survival of 37 per cent and five-year survival of 15.3 per cent. In the main this is because disease presents late with 63 per cent of lung cancers between 2010-2013 stage III or greater at diagnosis.

Rapid access lung clinics (RALC) and a lung leads group were established by the National Cancer Control Programme (NCCP) in 2009 to improve timeliness and quality of care in lung cancer. A number of key performance indicators were developed. A streamlined service allows access to rapid diagnostics and MDT discussion, permitting referral from GPs, radiologists or other clinicians. The RALC is the front end of the MDT process and serves to expedite the clinical assessment of patients with symptoms or signs suggestive of lung cancer.

The RALC in Beaumont Hospital, Dublin, commenced in 2009. Of the first 500 patients referred to the service over 98 per cent were reviewed in clinic within the two-week target time for assessment, with an average waiting time of 5.5 days. A total 206 patients were diagnosed with a thoracic malignancy; 179 of those were lung cancer. A further 79 patients were identified as having suspicious nodules that required further surveillance. This is an enlarging cohort in which ongoing surveillance coupled with smoking cessation and general lung health advice is provided. Nodules are typically followed for two years to determine benignity.

Over the past five years 761 patients attending our RALC were diagnosed with lung cancer with median time to complete diagnosis and staging and MDT team discussion of 21 days from referral. Pathological verification and staging of cancer, essential in determining optimum treatment and prognosis has improved considerably in Ireland in the past decades.

During the 1990s over one-third of lung cancers were of unknown stage. By 2010 we had achieved a pathological diagnosis and staging in 87.7 per cent of lung cancers attending Beaumont Hospital. Adenocarcinoma is the most common morphological type, comprising 34 per cent of cases. The incidence rates of adenocarcinoma have been rising steadily for both women and men, with annual percentage changes of 7.8 per cent and 5.2 per cent respectively. Men have experienced a decline in incidence of all morphological subtypes except for adenocarcinoma. Women have experienced an increased incidence in squamous, small cell and adenocarcinoma.

According to the Growing Up in Ireland Study, 28 per cent of pregnant women in 1997 were cigarette smokers. More recently, in 2015, the Coombe Women and Infants Hospital, Dublin, reported 11 per cent prevalence. The most recent Health Behaviour of School-aged Children Survey reported in 2014 that 16 per cent of 10-17 year olds reported having ever smoked tobacco; this compares to 28 per cent in 2010. Worldwide, Ireland ranks mid-range in smoking prevalence. The Tobacco Free Ireland strategy aims to reduce the prevalence of cigarette smoking further to less than 5 per cent of the population by 2025.

Cigarette smoking is the leading preventable cause of mortality in Ireland and causal in 85-90 per cent of all lung cancer cases. Clinician involvement increases the likelihood that the patient will successfully quit smoking. The role of the clinician is to identify smokers, advise quitting, assess the readiness to quit and assist those willing to quit. The addictiveness of nicotine is the primary barrier to quitting. Nicotine withdrawal symptoms peak in the first three days and subside over the next three-to-four weeks. Symptoms of nicotine withdrawal include increased appetite, weight gain, insomnia, irritability, anxiety, changes in mood and difficulty concentrating. These symptoms can be alleviated with nicotine replacement, varenicline or bupropion.

Nicotine replacement therapy has been shown to increase quit rates two- to three-fold. A meta-analysis of randomised trials found that varenicline was significantly more effective for smoking cessation compared with placebo (RR 2.27, 95 per cent CI 2.02-2.55). Patients should be reminded that most smokers require multiple attempts at smoking cessation before permanently quitting. A close follow-up approach utilising a target stop date and a combination of behavioural and pharmacological therapy is optimum.

Stereotactic ablative radiotherapy (SABR) is an increasingly used option in peripheral early stage lesions for those who are considered unfit for or decline surgery. It is currently the primary alternative to surgery in stage I or II disease. It comprises multiple convergent beams delivering high-dose fractions to a radiographically discrete area, achieving local control rate in approximately 90-95 per cent of cases in at least one prospective phase 2 study. When compared with surgery, retrospective analysis has shown similar cancer-specific mortality as sub-lobar resection (HR 1.25, 95 per cent CI 0.93-1.68), but higher mortality compared with lobectomy (HR 1.4, 95 per cent CI 1.09-1.94). At least two trials are now randomising patients with operable stage I NSCLC to surgery or SABR.

Other ablative techniques can be used in the management of early stage primary lung cancer or, more frequently, singular metastatic disease to the lung. Radiofrequency ablation is one of these and involves the insertion of an electrode into the tumour using CT guidance. Tissue heating leads to immediate cell death encompassing the tumour and a margin of normal lung parenchyma.

The most exciting development in advanced stage lung cancers in the past few years has been the emergence of immunotherapy. Immunotherapy differs from traditional chemotherapy, which primarily targets rapidly dividing cells, by aiding in the recognition of cancer as foreign by the immune system, stimulating immune responsiveness and reduces tolerance of tumour growth.

Programmed death receptor 1 (PD-1) exists normally as an immune checkpoint to dampen the immune response, protecting against detrimental inflammation and autoimmunity. PD-1 is upregulated on activated T-cells and upon engagement by programmed death ligand 1 (PD-L1) can lead to T-cell inactivation. Tumour destruction is promoted by inhibiting PD-1/PD-L1. Pembrolizumab is an IgG4 monoclonal antagonist antibody to PD-1 and the first immunotherapy agent approved in Ireland for the frontline treatment of patients with advanced NSCLC. Pembrolizumab monotherapy was compared with standard platinum-doublet chemotherapy in the phase 3 KEYNOTE-024 trial. Progression-free survival was prolonged with pembrolizumab (10.3 versus six months; HR 0.50, 95 per cent CI 0.37-0.68).

Overall survival was also prolonged (HR 0.60, 95 per cent CI 0.41-0.89). Severe treatment-related adverse effects were seen in 27 per cent of patients receiving pembrolizumab, compared with 53 per cent in those treated with platinum-doublet chemotherapy. A number of markers appear to predict response to these therapies, in particular the tumour mutation burden. Of particular excitement with these therapies is that sustained therapeutic responses are seen in some patients.

Two-thirds of new lung cancer cases in Ireland are either locally advanced (stage III) or metastatic (stage IV) at time of presentation. Screening has the potential to identify early stage disease with more favourable outcome. Many characteristics of lung cancer suggest that screening should be effective: High morbidity and mortality, significant prevalence, identified risk factors (eg, smoking and presence of airflow obstruction), a potential lengthy pre-clinical course for NSCLC and evidence that stage of disease has a significant effect on outcome.

Low-dose helical computed tomography (LDCT) permits non-contrast, high-resolution (1mm interval) images with a single inspiratory scanning time of under 25 seconds. The American National Lung Screening Trial (NLST) compared LDCT scanning with chest radiograph for three years in over 50,000 subjects. Participants were 55-74 year olds with at least 30-pack-years smoking history. Interim analysis found a statistically significant benefit for LDCT scanning; 1,060 cancers identified in the LDCT group, and 941 in the chest radiograph group. The number needed to screen to prevent one lung cancer death was 320 and the overall mortality reduction from screening was 20 per cent. More recently a large European trial has revealed similar findings.

The best strategy to reduce lung cancer prevalence is undoubtedly prevention. This requires a concerted public health strategy aimed at reducing tobacco use combined with support to smokers (most of whom wish to quit) through a multifaceted approach with behavioural and pharmacological therapy. Over the past decade in Ireland progress in the organisation of care through dedicated RALCs and MDTs, together with advances in diagnosis, imaging and therapeutic advances have resulted in clear progress in lung cancer care and outcomes. In our opinion, Ireland needs a screening programme for this devastating disease if we are to make serious progress in the coming decades.