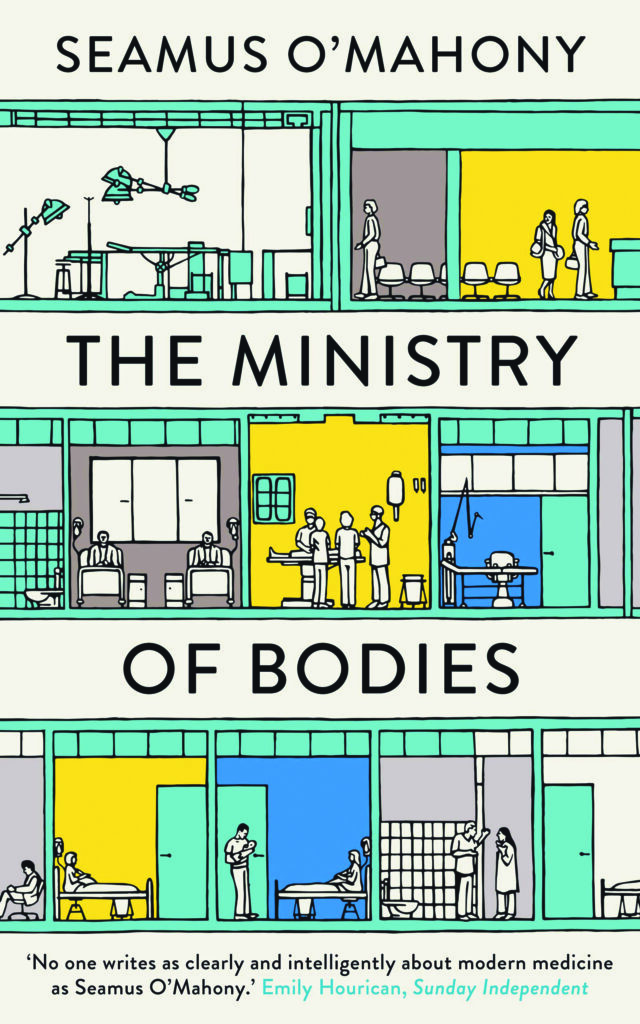 Many years ago, a physician with whom I trained stopped in the middle of a
ward round, turned to the assembled team and made one of his occasional
pronouncements. “Modern medicine,” he proclaimed, “is an extraordinary mix of breath-taking efficiency and heart-stopping absurdity. In the no-man’s land between these extremes, medicine happens. I have no idea how it happens, but it does.” With this, he turned on his heel and shot up the
stairs. We trotted after him, suitably mystified.

I have no doubt that this physician would enjoy Prof Seamus O’Mahony’s new book, The Ministry of Bodies. O’Mahony (who writes for this newspaper, but whom I do not know at all) has previously written The Way We Die Now (2016), which won a BMA Book Award and Can Medicine Be Cured? The Corruption of a Profession (2019). Both have been acclaimed and translated into different languages.

In The Ministry of Bodies, O’Mahony presents a series of vignettes, stories, reflections and insights into the nature of hospital life, the nature of medicine and – to an extent – the nature of the human condition. O’Mahony covers this territory with pith and wit, delivering a mix of curiosities,
insights, and quiet reflections, laced with a piercing sense of humour. The book is gripping: I read it over a weekend and laughed aloud repeatedly. If you have ever worked in a hospital, find yourself a copy of this book.

Read it at once. At times, O’Mahony’s tone is not unlike that of Henry Marsh, the celebrated neurosurgeon and author of Do No Harm: Stories of Life, Death and Brain Surgery (2014) and Admissions: A Life in Brain Surgery (2017). Marsh also featured in a wonderful movie, The English Surgeon, based on his work with neurosurgeons in the former Soviet Union. Both Marsh and O’Mahony share an unshakable belief in the core values of medicine, a deep commitment to patient care and a distinct distaste for some of the realities of healthcare delivery today. Both are admirable physicians and first-rate writers.

O’Mahony, however, has added a razor-sharp sense of the absurd to both this book and his previous one, Can Medicine Be Cured? At one moment, O’Mahony can discuss patient care, just like Marsh does, but, a sentence later, O’Mahony’s wit is more akin to that of Adam Kay, the former junior doctor and author of the wildly successful This Is Going to Hurt (2017). Some of the absurdities that O’Mahony highlights are, of course, intrinsic to hospitals, but some feature in all organisations that are large enough to have professional managers. And, of course, some of the incongruities that O’Mahony identifies are simply part of human nature, writ large in the setting of illness.

There are some hugely important points about medicine here too, amid O’Mahony’s observations about day-to-day care and his unerring instinct for the absurd. I was especially struck by O’Mahony’s comments about his admission to the coronary care unit. O’Mahony “was as weak and dependent as a baby”, but “what surprised me was that I did not rebel against this vulnerability.

I simply wanted the doctors and nurses to look after me.” O’Mahony told the doctor “to do whatever he thought was best. It wasn’t that I was indifferent – I was anxious to recover – but I didn’t want information, choices, agency, control; I simply wanted to feel safe, comforted.” That is what we all want when we are sick. It is a beautiful truth, directly told.

Passages like this make O’Mahony’s book more than a succession of (very) funny anecdotes, more than the cri de coeur of an experienced physician and more than an exceptionally competent exercise in Life and death (and the absurd) in a modern hospital medical writing. No, at its heart, this is a book about how to be a good doctor. The key to this is O’Mahony’s remarkable moral compass, which is in clear evidence as he navigates the perils, pitfalls and extraordinary potential of what many now call “healthcare delivery”, but should properly call “medicine”.

O’Mahony’s moral compass is focused firmly on his patients: Their needs, their experiences and what we, as doctors, nurses and others, can offer to help. Delivering proper medical care is the beating heart of this narrative.
Everything else is judged solely by its relationship to this task, as it should be. O’Mahony is deeply tolerant of anything that furthers good medical care and deeply sceptical about anything that impedes it or is so far removed as to be irrelevant. His mordant wit is drawn to instances of the latter, but – make no mistake – there is an utterly uncompromised idealist here, beneath the layers of sardonic humour.

Early in the book, O’Mahony writes that young people become doctors for two reasons: “Status and a good living.” Much as he might deny it, O’Mahony proves the precise opposite. This book is driven by a profound commitment to medicine, a passion for communication and a sense of vocation that is as valuable as it is rare. The book is also very, very funny. More, please.