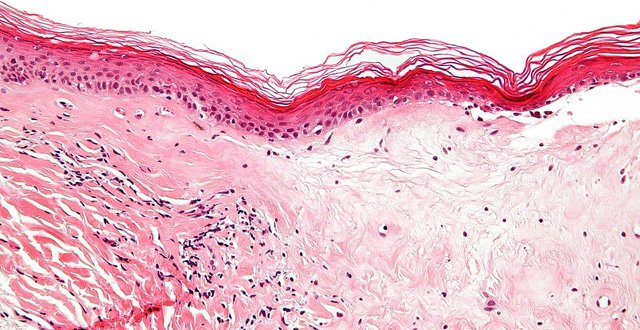 Lichen sclerosus is an inflammatory clinical condition with a predilection for vulval skin. It can affect both males and females and can occur at any age. Typically, vulval lichen sclerosus presents in perimenopausal or postmenopausal women. Some 85-to-90 per cent of cases are anogenital.

It affects the labia minora and majora and also affects patients perianally. Scarring, fissuring and skin-splitting can occur and the changes seem to spare the flexures. In untreated cases, progression can occur, leading to obliteration and fusion of the labia and clitoral hood. There is an association with autoimmune conditions such as thyroid disease, leading to speculation that it has an autoimmune component.

Various autoantibodies directed against thyroid, microsomal, nuclear and mitochondrial antigens have been reported to be more common in patients with lichen sclerosus than in healthy controls.

There is a risk of squamous cell carcinoma of the vulva, of the order of 4 per cent. In cases where this occurs, the condition is often long-standing.

The rationale for once-a-day application is based on pharmacodynamic studies showing that an ultra-potent steroid only needs to be applied once a day on extragenital skin. If symptoms recur when the frequency of application is reduced, the patient is instructed to use the treatment more often until the symptoms resolve. They can then try to reduce the frequency again. A 30g tube of clobetasol propionate 0.5 per cent should last at least 12 weeks.

If the treatment has been successful, the hyperkeratosis, ecchymoses, fissuring and erosions should have resolved, but the atrophy, scarring and its associated pallor will persist.

Many patients worry about using steroid ointment in this way and a common occurrence in resistant cases is non-compliance. Some patients will preferentially try homeopathic or other home remedies, which can worsen irritation. The presence of ecchymoses on the vulva is a clue that steroid is being under-used.

Microscopic features are variable and are related to the age of the process and the degree of secondary changes related to itching and rubbing.

Features often seen are loss of rete ridges and a homogenous appearance to the upper dermis. There can be associated oedaema, fibrin and associated decrease in collagen vascularity.

Surgical division of adhesions generally leads to a disappointing outcome and should be avoided if possible. Excision of affected areas by means of simple vulvectomy has been used. Almost inevitably, the stigmata of disease recurs.

These conditions may occur after an inflammatory condition of the vulva or vestibule. Typically, the patient remains symptomatic, despite objective clinical improvement or resolution of the skin lesions. Neuropathic pain does not respond to topical corticosteroids and treatment must be directed to the eradication of the neuronal sensitisation.

To break this pain cycle, topical steroids such as lignocaine 5 per cent gel or ointment are helpful.

Thereafter, amitriptyline, beginning with low dose at night, is used. If it is still persistent, gabapentin is recommended.

Lichen planus can present with similar features, and often there are other areas of involvement. In their history, the patient may have had lichen planus of the mouth and attended a dentist. Pathognomonic features include Wickham striae, which are seen on mucosal surfaces.

Can affect older people, though traditionally linked with children. Intense pruritus at night; likely to be perianal rather than vulval.

Describes patients who have vulval pain without necessarily having an underlying dermatosis. This can be provoked or unprovoked and can be localised to one area or radiating.

Can appear quite similar initially.

There is pallor of affected skin but the quality of skin is not atrophic. There may be vitiligo in other areas.

The British Association of Dermatology advocates two follow-up visits after diagnosis — one at three months and a further one at six months — to ensure compliance and it advises that the patient has a good understanding of treatment instructions. Follow-up in the community is then recommended, with an annual visit to the GP. Written instructions are recommended.

Any new erythema or ulceration should spark a re-referral. In practice, community follow-up does not usually happen in Ireland and often, patients are seen on a bi-annual basis in gynaecology or dermatology clinic for review.

Follow-up at a specialised clinic is indicated for troublesome cases, in cases where there is suspicion of vulval intraepithelial neoplasia and anogenital lichen sclerosus.

Past history of mild hypothyroidism.

Ms BB presented to her general practitioner one year ago with vulval irritation. She was treated with antifungals on a few occasions and treated with antibiotics and vaginal gels. She attended a Well Woman clinic six months ago and had swabs and a smear performed. She reported that the smear was very painful.

The patient described the itch as “unbearable at times”. It was interfering with social activities, affecting mood and symptoms were worse at night, affecting sleep.

Clinically, the patient had pallor of the vulva, loss of architecture and narrowing of the introitus. The pallor had a waxy consistency.

There were no other areas of involvement and gums and mouth were normal.

Histology confirmed the clinical diagnosis of lichen sclerosus, without evidence of vulval intraepithelial neoplasia or carcinoma. Fungal stains were negative.

The patient was commenced on treatment involving topical steroids and emollients and was given advice regarding lifestyle factors. An explanation of the condition was given.

She was reviewed in six weeks and reported significant improvement.

She had some concerns regarding the steroid use, as she had been warned by her pharmacist about skin-thinning. She had made some complaints about intense pruritus and generalised warmth at night.

She admitted to using two heavy duvets, as she had cold feet. This was discouraged, as was the use of electric blankets.

Follow-up was arranged for four months and thereafter twice annually, once the condition was under control.