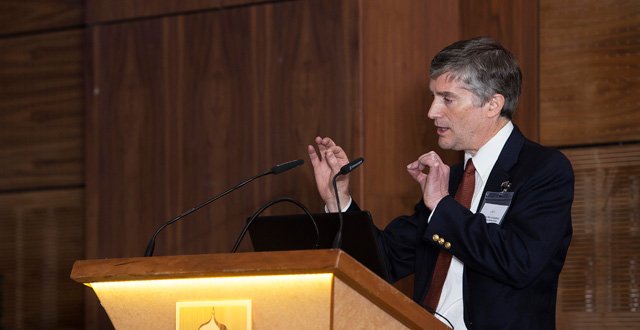 People either known or unknown, and domestic pets, are among the most common hallucinations experienced by patients suffering from delirium, the 2015 Annual Meeting of the Irish Neurological Association (INA) heard.

Dr Shaun O’Keeffe, Consultant Gerontologist, University College Hospital Galway, gave a lively presentation on visual hallucinations in delirium, revealing that the most unusual he has dealt with concerned “two-headed doctors, and nuns with guns”.

Speaking to the Medical Independent (MI) in advance of his presentation, Dr O’Keeffe said the most common delirium-associated hallucinations are of people. He added that half are typically family or friends, and the remainder strangers.

“Sometimes they are distorted or small in size… domestic pets or farm animals if the patient is rurally-based are also common,” he noted.

Delirium-associated hallucinations are more common in patients who do not have dementia and in those with poor eyesight, he told MI.

“So people who don’t have dementia or Alzheimer’s disease are more likely to get florid hallucinations, or are at least more likely to recall them,” he commented.

Delirium is transient, often lasting just a few days, and is primarily caused by an acute illness, infection, or reaction to certain medications, Dr O’Keeffe explained. It is also quite common after major orthopaedic surgery, he added.

“Delirium can occur in up to one-third of older people in hospital, so it is extremely common, particularly in frail older people who get ill. It is distinct from dementia, and is transient, and it is helpful to debrief people when they have come around, to reassure them about the nature of illness,” Dr O’Keeffe said.

Patients suffering hallucinations “often have a half-awareness that it is not real but it is helpful to reassure them afterwards that it was the illness, not that something was wrong with them,” he said.

The initial results of stereotactic radiosurgery on Irish patients diagnosed with trigeminal neuralgia have been positive and the procedure offers a potential alternative to riskier, more invasive treatments, the INA 2015 Annual Meeting heard.

Trigeminal neuralgia is a very painful condition that affects the main nerve of the face. ‘Cyberknife’ radiosurgery is a non-invasive procedure that involves aiming a focused beam of radiation at the trigeminal nerve to destroy it at the point where it leaves the brain.

Speaking to MI about the presentation, President of the INA Dr Timothy Counihan said that, while trigeminal neuralgia can be treated medically in many patients, they often become immune to treatment. “And [the condition] is exceedingly painful, devastating for some patients. It is considered one of the most painful conditions out there. There are some traditional surgical interventions that have been somewhat successful, but perhaps with some morbidity. This treatment is a cyberknife, radiosurgery, so it is non-invasive and sounds promising… I think it would be an excellent option for our patients and we have lots of patients who have difficulty with this condition,” he said.

Meanwhile, the meeting also featured a presentation about an Irish case of acute autonomic neuropathy induced by a Lion’s Mane jellyfish sting. The patient suffered light-headedness, excessive sweating, erectile dysfunction and urine and bowel issues, as well as anaphylactic shock requiring resuscitation. As Ireland heads in to jellyfish season, clinicians need to be aware of the risks of this condition, which is potentially fatal, the meeting was told.

There was also a case report from St James’s Hospital, Dublin, on texting-induced reading epilepsy in a young Irish male. It is only the second such case recorded worldwide. Normally, reading epilepsy cases are caused by reading actual written text, either aloud or silently, in books, etc. It was suggested that using picture characters (known as ‘emojis’) instead of written words might be useful for sufferers of text-induced epilepsy.

Smoking has key role in MS development and progression

The role of smoking as a risk factor for the development of MS and as a predictor for more serious disease is now becoming fully apparent, one of the world’s leading experts on the disease told the 2015 INA Annual Meeting in Galway.

Prof Peter Calabresi, Professor of Neurology, Johns Hopkins Medical School, Baltimore, US, gave a well-received Callaghan Guest Lecture on the mechanisms underlying disease progression in multiple sclerosis and strategies for tissue protection and repair, an area on which he is focusing the second half of his illustrious career.

Disease progression in MS starts from the beginning and there are a number of factors affecting why it is so variable, he explained. These include environmental factors like smoking and infections that activate the immune system, intestinal bacteria releasing toxins, high blood pressure and diabetes, as well as the role of genes and particular immune responses and mitochondrial susceptibility, eg, hereditary optic neuropathies.

“It’s not that patients suddenly become progressive 10 or 20 years into the disease,” Prof Calabresi told MI. “We are starting to understand the tissue mechanisms of injury so not only does microscopic inflammation drive a problem, but chronic demyelination, the absence of inflammation is very important, and the interplay between the myelin and axon needs to be studied better. How do they communicate with each other? The evidence today suggests that remyelination does happen and we may be able to facilitate it.”

He continued: “There have been some very exciting hits in the laboratory that might facilitate endogenous remyelination pathways and then the question is, how do we measure them in a phase II trial, in a reasonable period of time, six-to-12 months, to develop some proof of concept. For me, this is very reminiscent of where we were 20 years ago with the anti-inflammatories and so I am optimistic.”

This work suggests there will likely be a breakthrough in respect of finding an effective treatment for progressive forms of MS within the next decade, believes Prof Calabresi. “I don’t think it will happen overnight and I don’t think it will be ‘one therapy fits all’ but I think what we will see is that we will be able to have a significant impact on some types of disease progression, so that is good. We really need that desperately.”

Irish neurology research holds its own internationally, according to the President of the INA Dr Timothy Counihan.

The quality and breadth of the entries for this year’s Annual Meeting research prizes was praised by Dr Counihan, who noted that approximately 110 abstracts were entered for consideration. Submissions included clinical case reports, clinical neurology research and neurosurgical reports across a wide range of topics.

The winners were as follows: