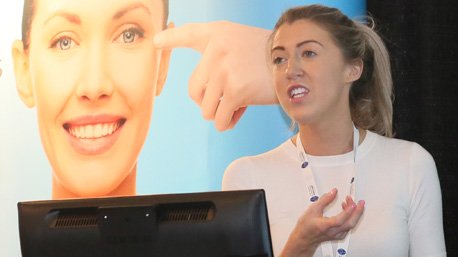 New Irish research on age-related macular degeneration (AMD) is showing potential as regards one day identifying people more likely to develop the condition and the likelihood of having severe disease or being responsive to a particular therapy, the ICO Annual Conference heard.

Dr Maedbh Rhatigan, Researcher, Royal Victoria Eye and Ear Hospital (RVEEH) Research Foundation, gave an update on her research project about the negative regulators of inflammation and AMD in a cohort of patients under the Irish Longitudinal Study on Ageing (TILDA).

Dr Rhatigan was announced as the winner of the ICO/Novartis Bursary research award at the 6th Annual Retinal Meeting last November for her project. AMD is the leading cause of central vision loss worldwide. The estimated prevalence of AMD in Ireland is seven per cent, with an annual cost over €130 million. Inflammation is known to play a role in the development of AMD, however the exact mechanisms remain unresolved. In collaboration with TILDA, Dr Rhatigan’s project is looking at the levels of negative regulators or ‘off switches’ of three key inflammatory mediators, elevated in the blood of people with AMD. To date she has found preliminary evidence that particular negative regulators are elevated in people with AMD.

Inflammation is known to play a role in the development of AMD, however the exact mechanisms remain unresolved

“It is early days, and these are preliminary results, but this study will help to further understand the role of inflammation in AMD. It is our understanding these pathways may aid in identification of patients at increased risk of progression to more severe forms of AMD and may provide novel targets for therapeutic intervention,” Dr Rhatigan told MI.

Dr Rhatigan’s study is being carried out under the supervision of Mr Mark Cahill, Consultant Ophthalmologist and Vitreoretinal Surgeon at the RVEEH and Dr Sarah Doyle, Assistant Professor in Immunology at the Department of Clinical Medicine, Trinity College Dublin, and is being undertaken as part of an MSc by research in Clinical Medicine.

Meanwhile, Prof Carrie MacEwen, President of the Royal College of Ophthalmologists in London, gave a presentation on the epidemiological aspects, changing trends and outcomes of ocular trauma, while the conference also featured a well-attended medical retina symposium and an update on oculoplastic management across the ages.