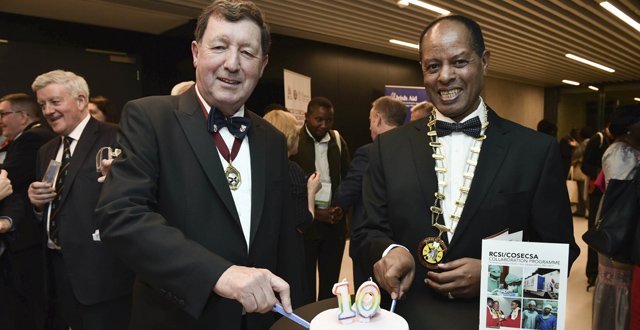 At the recent 2017 Millin Meeting in the RCSI, a detailed and passionate discussion regarding the major challenges facing paediatric surgery in Ireland was coming to a close (see full report in 27 November issue of the Medical Independent (MI). The co-chair of the meeting, Dr Miliard Derbew, President of the College of Surgeons of East, Central and Southern Africa (COSECSA), was rounding-off the meeting by thanking the speakers and praising the debate, when he mentioned that less than 50 paediatric surgeons serve an area of Africa with a population of tens of millions. Thus, many children must rely on the work of general surgeons, although that is also far from being a reliable option for many. East Africa has a population of over 320 million served by just 1,690 surgeons — an average of one per 200,000 people in East Africa compared to 35 per 200,000 in Ireland.

Dr Derbew’s comments did not in any way undermine the importance of the problems facing this country in paediatric surgery, but it did allow a little perspective on the scale of the challenges currently faced in East Africa.

Attempting to grapple with Africa’s ongoing crisis with shortages of surgeons is part of the reason the partnership between the RCSI and COSECSA was established.

Ten years ago, the RCSI and COSECSA established a collaboration programme with the aim to increase the “provision of quality, essential surgical and emergency care in the COSECSA region, particularly at district level”.

The programme is supported by Irish Aid and the RCSI, which provides staff and resources, including curricula, education tools, skills training, examination, accreditation and quality assurance processes. Recently, Minister of State at the Department of Foreign Affairs and Trade with special responsibility for the Diaspora and International Development Ciaran Cannon announced a further round of funding for 2017-2020 of €1.6 million.

All of this support means that, according to the RCSI, COSECSA is now the largest single contributor to the surgical workforce in the region and that graduates go on to perform 300-400 major operations per year.

The College recently marked the 10-year collaboration with an anniversary event at the Global Forum on Human Resources for Health, held in the RDS Dublin last month.

While progress has been made, significant challenges remain, so do the RCSI and COSECSA have any firm targets for the number of surgeons they would like to see emerge from the training programmes in the coming years?

“COSECSA plans to graduate a total of 500 specialist surgeons by 2020 — 206 surgeons have already graduated, so the College is expecting another 300 to successfully complete their training by 2020,” Ms Deirdre Mangaoang, Assistant Programme Director, RCSI/COSECSA Collaboration Programme, told MI.

But it is not just the number of individual surgeons, it is also the number of countries involved that are expected to expand soon, MI has been told. Up until recently, COSECSA covered 10 countries — Ethiopia, Kenya, Malawi, Mozambique, Rwanda, Tanzania, Uganda, Burundi, Zambia and Zimbabwe. The training programme is run on a decentralised model and it is offered in 99 accredited training hospitals across these countries. It is the same standardised curriculum in all countries.

“In the same time frame [by 2020], COSECSA is also planning to roll-out the training programme in three new member countries, thus increasing its reach to 13 countries. Namibia became the 11th country to join in recent weeks,” said Ms Mangaoang.

Training takes place in hospitals, including regional-level hospitals, and much of the academic component is online, through https://www.schoolforsurgeons.net. This means that trainees are not required to leave their home area to access higher surgical training.

The Lancet Commission on Global Surgery (2015) estimated that 93 per cent of people in Sub-Saharan Africa did not have access to timely and effective surgical care. Current estimates suggest that 6.5 per cent of the global disease burden is due to conditions amenable by surgery.

Ms Mangaoang points to recently-published research showing that most surgeons who access training locally in the East, Central and Southern Africa regions stay and practise in their home country after they graduate.

“The college also has set a target of increasing the number of female trainees to 20 per cent by 2020; currently, females make up 16.5 per cent of the trainee cohort,” she adds.

“COSECSA launched Women in Surgery Africa (WiSA) in 2015 to actively promote surgical training to female doctors and medical students, and to facilitate mentorship for females pursuing a career in surgery.”

As Prof Derbew noted at the recent Millin meeting, the challenges are vast and Ms Mangaoang told MI that this is particularly the case when it comes to sourcing trainers.

“Scaling-up the number of accredited training hospitals and accredited trainers to meet the demand for places on the programme, while ensuring a universally high quality of training, is the biggest challenge at the moment,” she said.

However, there have been impressive increases in the numbers over the last 10 years. In 2008, COSECSA graduated six specialist surgeons; in 2016, 47 surgeons graduated. The cumulative number of graduates at the moment is 206. This number should exceed 250 graduates after the exams this month.

“The geographic area covered by COSECSA is almost 10 times the size of France and serves a population of over 320 million people,” noted Ms Mangaoang.

“Resources and infrastructure across the region are generally limited, which makes it all the more challenging.” COSECSA has called on African governments to support local indigenous training for surgeons, and for international organisations involved in surgical training to work in partnership more.

But what does that mean practically? Are there specific examples of work that could be done to improve the situation?

“Research shows that surgeons who have the opportunity to train in their home country are much more likely to stay and practise at home.

“COSECSA-trained surgeons go on to perform on average 300-to-400 major operations per year, thus having a huge impact on healthcare in the region.”

She added that there are pre-existing examples of crossnational partnerships that could serve as a guide to international organisations.

“There are many good examples of partnerships, such as the Norwegian state’s co-operation with Malawi in supporting the development of neurosurgery or the University of British Columbia’s partnership with Mulago Hospital in Uganda,” Ms Mangaoang said.

“In these cases, as with COSECSA, partners are unlocking potential that already exists in the region and providing support to local efforts to address problems caused by lack of access to safe surgery.”

According to the RCSI, until recently, surgery has not been considered as part of a health strategy in low-income countries,because it has been considered to be unaffordable.

“This has now changed,” said the College.

“In May 2015, governments across the world adopted the first World Health Assembly resolution on Surgical Care and Anaesthesia and in doing so, recognised surgery as an integral part of primary healthcare, a preventive strategy and a cost-effective response to numerous health challenges in resource-poor settings.”

Before the collaboration with the RCSI, COSECSA was originally established in 1999 to advance training, examinations standards, research and practice in surgical care by increasing the number of appropriately-trained, well-qualified surgeons and surgically-trained general medical officers.

Addressing the Millin Meeting, RCSI President Prof John Hyland spoke warmly of the work the late College President Prof Gerald O’Sullivan did in building the links between the College and Africa.

“He had achieved an awful lot of things over this professional career,” said Prof Hyland.

“He had a big interest in surgical research and surgical practice. But probably one of his greatest achievements was getting involved in setting up COSECSA.

“In Gerry’s memory, COSECSA has kindly offered a medal for the surgeon in their training scheme who got first place in their fellowship.”

At the 2017 Millin Meeting, the Prof Gerald C O’Sullivan medal was presented to Dr Augustine Mapfumo from Zimbabwe.