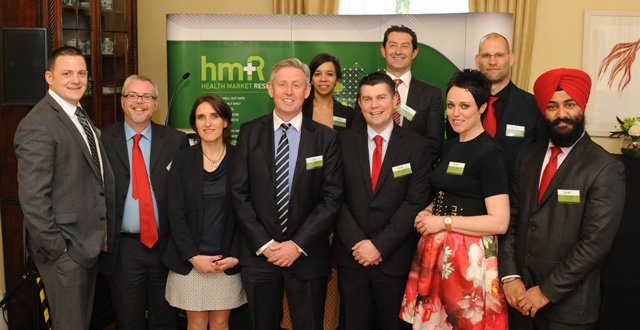 The Irish Pharmacy Union (IPU) is constantly striving to develop solutions on behalf of members to assist them to develop and improve their pharmacy business. Two years ago the IPU began discussions with a number of parties to find a way to assist pharmacies in unlocking the potential of the sales data at their disposal, explains IPU Secretary General Darragh O’Loughlin.

After a significant amount of research, they identified the Portuguese National Pharmacy Association (ANF) — a pharmacy-owned organisation with a similar ethos to that of the IPU — as their preferred partner.

The ANF established hmR in Portugal six years ago to empower their members by providing the best possible business intelligence, whilst also adding tangible value to their industry partners. For this reason, hmR is proudly positioned as the number-one business intelligence provider in the Portuguese market.

Together, the IPU and ANF have created hmR Ireland to unleash the power of transactional data captured at pharmacy level in Ireland, which will also similarly provide significant value for pharmacists and pharmaceutical companies alike.

hmR’s entry into the Irish market is timely, as pharmacies currently face many challenges. These include a decline in consumer spending, a reduction in Government reimbursement rates and the introduction of reference pricing in 2013, which have all had a detrimental effect on the profitability of pharmacies. While there is no panacea to all these challenges, it is now globally acknowledged that data is a key component to unlocking success.

hmR Ireland Chairman and former IPU President Rory O’Donnell explains: “Essentially, the IPU recognised that there was a need for better business intelligence as well as having timely, relevant national data with which to promote pharmacy, to advocate for pharmacy and patients, and to use in its dealings with the health services.”

O’Donnell notes that pharmacists using the hmR Ireland business intelligence solution ‘Pharmacy Watch’ will be able to benchmark their business, right down to individual products, against their local area and against national trends, and make informed business decisions based on real-time, accurate data. Thus the hmR offering is an incredibly powerful tool. “Pharmacy Watch will provide important information on dispensary trends such as generic penetration and dispensing volumes of all categories of medicines. Put simply, Pharmacy Watch gives participating pharmacies a strong competitive advantage. Not only will I know which products are selling well in my area and nationally, but most importantly, I will also be acutely aware of what is not selling!”

IPU President Kathy Maher says Irish pharmacists have not only an opportunity to assess how they are managing their sales, but can also gauge what their patients’ changing healthcare needs are and identify any additional services they may need.

She points out that there is huge trust by the members in the work of the IPU, which is behind the establishment of hmR Ireland. “The data that goes from pharmacy systems is completely anonymised and aggregated so there is no possibility of individual pharmacies or their data being identified. The data will also be extremely influential in making key healthcare decisions. For example, with this data we will be able to establish the usage of medicines, including antibiotics and Tamiflu. We can work with the HSE to increase awareness of the level of influenza and help ensure that those most at risk are treated appropriately. Irish pharmacists are perfectly positioned to make this happen,” she notes.

O’Loughlin reaffirms Ms Maher’s remarks by adding that the IPU will now be armed with better, more up-to-date and more accurate information than ever before when having discussions and negotiations with the Department of Health and the HSE: “We will be better informed and, most importantly, we will be in a position to back up our arguments and analysis with solid data.”

hmR is much more than just a data company however, according to Paulo Duarte, President of the ANF. “We have the latest technology to deliver the best quality data, and it is very intuitive, reliable, and quicker than anything else in the market in Portugal and Spain, where we’re already established. We do much more than provide raw data.

“It is useful not only for pharmacies and pharmaceutical companies, but also all healthcare stakeholders and regulators to help them make the best possible political decisions based on real evidence. So that is the role of hmR — to provide better information quicker, to solve problems and be a partner, more so than a service provider,” he says.

Speaking at the recent launch of hmR Ireland at the residence of the Portuguese Ambassador, John Gallagher, hmR Country Manager for Ireland, revealed that hundreds of Irish retail pharmacies have already signed up to the hmR Ireland panel, with market penetration continuing to grow every day.

What is key to hmR Ireland’s successful business model is its partnership approach. “What we do is about partnership, not negotiation. With partnership you are more likely to achieve your goals. Such an approach is vital to retail pharmacists who are seeing their roles change and expand and it is clear they will have a bigger role to play in healthcare delivery in the coming years so the information hmR Ireland provides will be vital,” Gallagher says.

Leader of Fianna Fáil Micheál Martin, who formally launched hmR Ireland, agrees. “Pharmacy is an essential part of the health infrastructure in Ireland, not utilised to its full extent or potential, and I say that as a former Minister for Health. We need a partnership model to replace the whole conflict of one side versus the other side, because very often that takes away from the sector being able to do far more for patients and the public in general,” he said during his launch speech.

As the Irish economy begins to show strong signs of recovery, it is heart-warming to witness the start of a new company with so much potential. Given the strong turnout from industry and pharmacy at the recent launch of hmR Ireland, this company is one to watch and reflects what can be achieved when two nations such as Ireland and Portugal collaborate.

hmR was originally established in June 2009 in Portugal by the ANF, where it has amassed a market share of over 80 per cent.

The company was successfully launched in Spain in 2013.

In 2014, hmR Ireland was established, building on the strong foundations of the IPU and the ANF.

Both organisations represent more than 90 per cent of community pharmacists in their respective markets.

hmR believes that our commitment to exceeding expectations, combined with the accumulated experience of our team in terms of knowledge of the sector and technological specialisation are the main factors that will make the difference in how we serve our clients. These factors form the bedrock at hmR.

hmR Ireland guarantees total confidentiality throughout the process of collecting, processing and providing anonymised data to our clients.