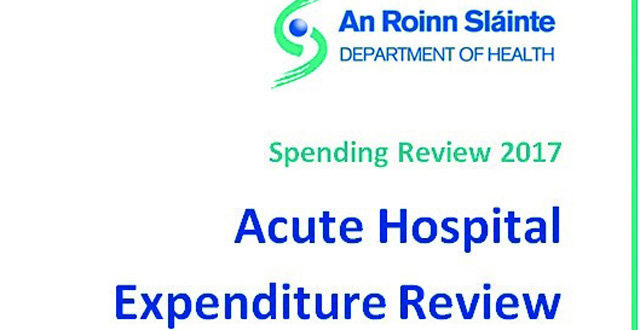 While the performance of the national economy has improved considerably in the last couple of years, the need for the Government to closely monitor expenditure has not changed. The Minister for Public Expenditure and Reform Paschal Donohoe recently announced, alongside the publication of the Mid-Year Expenditure Report 2017, that a spending review would take place in advance of Budget 2018, to reflect Ireland’s changed economic and fiscal context. As part of this process, the Acute Hospital Expenditure Review was recently published by the Department of Health and examines baseline expenditure in the public acute hospital sector over the period 2011 to date and identifies trends and drivers in hospital expenditure. The report also considers the levels of activity undertaken and whether there have been improvements in productivity over time.

The report acknowledges that the recession led to significant reductions in hospital budgets and staffing, but continued increase in hospital output. Expenditure in 2014 on acute hospital services was below 2008 levels but a significant increase was achieved in the volume and complexity of activity. Efficiency has improved significantly, as is evident from major reductions in unit cost, according to the Department.

Gross Government spend on healthcare has increased by €659 million (14 per cent) since 2011; however, the majority of this increase (70 per cent) has occurred since 2014.

The cumulative annual growth rates in gross expenditure, income and net expenditure from 2014 to 2016 were 4.6 per cent, 4.1 per cent and 4.7 per cent, respectively.

While pay expenditure has increased, with an additional €263 million spent on this category in 2016 compared to 2011 (an 8 per cent increase), the fastest-growing spend area is the non-pay category, which has increased by 29 per cent, or €396 million, since 2011.

Analysing the cumulative annual growth rate (CAGR) of these categories also indicates a significant investment in non-pay expenditure items. The CAGR of the non-pay category, at 5.3 per cent, is 3.5 times higher than the annual increases in pay, at 1.5 per cent per annum.

Income as a percentage of total gross expenditure has remained relatively constant. In absolute terms, income has increased by over €150 million since 2011. While income increased by 5 per cent in 2012 and then decreased by 3.4 per cent in 2013, more significant increases were seen in 2014 and 2015 of 8.3 per cent and 6.6 per cent, respectively, before levelling-out with a 1.7 per cent increase in 2016. The increase in income is largely due to growth in the amount of maintenance (hospital) charges collected from the public; €626 million was collected in 2016, compared to €457 million in 2011.

“In addition to increasing staff numbers, there are other factors that influence expenditure on pay. One factor which needs to be considered is the effect of central pay decisions, such as the Lansdowne Road Agreement (LRA) and increments,” according to the report.

In absolute terms, clinical expenditure increased more than non-clinical, at €233 million and €163 million respectively, since 2011.

Drugs, laboratory and medical/surgical supplies accounted for 80 per cent of expenses within this category in 2016. These costs have been increasing steadily since 2011, when they accounted for 76 per cent of the category.

Key among these is the emergence of new and more expensive medical technologies (eg, transcatheter aortic valve implantation (TAVIs)) that provide treatment for conditions previously untreated, or new and improved treatments for existing conditions. Medical inflation is running ahead of the general inflation rate — at 2.4 per cent versus 2 per cent — in the 2011-2016 period.

Over the period 2011-2016, non-clinical expenditure increased by €163 million, which is a considerable increase in percentage terms (nearly 40 per cent).

“All sub-categories showed considerable increases, with the exception of a small decrease in bad and doubtful debts,” according to the report.

Cleaning and washing, professional services, office expenses, rent/rates and ‘other’ were the largest cost items, accounting for 58 per cent of the non-clinical costs in 2016. Cleaning and washing is the single largest cost item in non-clinical expenditure and this increased by 14 per cent in the period under review. In this context, the report says it is important to note the need for adherence to hygiene standards and the prevention of healthcare-associated infections (HCAIs) — in 2013, the cost of HCAIs in Ireland was estimated at €118 million, with 29,000 patients acquiring a HCAI.