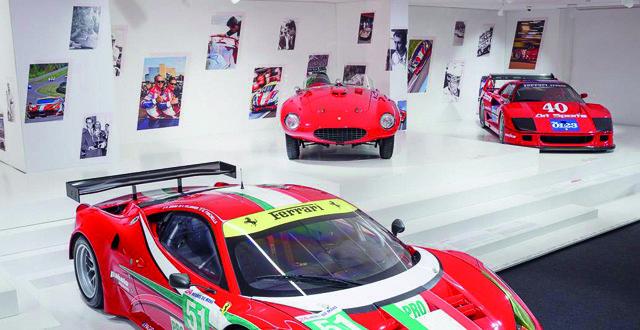 Every now and then a man must undertake a wee pilgrimage. It’s good for a lot of things, most of all for dissipating stress. My latest pilgrimage was to Motor Valley in Italy. As the Americans have their Silicon Valley, we Europeans have the much more interesting Motor Valley.

The phrase ‘Motor Valley’ refers to an area that runs through towns like Modena, Maranello and Bologna.

We were somewhat restricted in our travels by work commitments and Ryanair flights. So we flew into Bologna on a Saturday night, rented a small wreck (about €105 for the three days) and set about planning our travels the following day. Luckily, rent-a-wreck had upgraded us to a car with sat nav. Bring your own, unless you plan on getting lost.

First stop after the B&B was to the Lamborghini Museum in Sant’Agata. Sunday visiting meant we could not see the factory in operation (something to have for a next visit) but the display cars were truly stunning. (Mr Lamborghini wasn’t too happy with Mr Ferrari’s attitude to him when he needed his Ferrari fixed, so he went and set up his own car company).

Travelling with my brother and nephew, one a mechanic and the other a mechanical engineer, meant that some time was spent inspecting the underside and inner workings, as well as enjoying the art and design of the cars. We learnt that Lamborghini will be expanding the factory and workforce (by 400) to prepare for the manufacture of its newest car, its second SUV, the Urus.

We left to go to the Ferrari museum in Maranello. Again, a stunning array of cars, but now we had more Formula 1 and racing Ferraris to enjoy. Engines were also on display with drivetrains, again for the mechanics to discuss and debate. One of the highlights was driving the Formula 1 simulator. All three of us raced against each other in these mock up cars with three screen displays and movable frames to give the impression of acceleration, braking and cornering (and losing control). Yours truly managed to finish third. We asked if we could get these to use at home. We were told, “certainly, they only cost €80,000-€90,000 each”. The Ferrari factory tour is limited to Ferrari owners, so we didn’t bother with the bus tour that allowed you just to see the outside of the factory.

Outside, we deliberated and talked about renting a Ferrari for a drive. There are a lot of places to do this, and we opted for one that gave us 10 minutes each at the wheel for €240. Might seem like a lot, but it was another highlight. We were accompanied by a man who used to race Lamborghinis for a living! Our chosen car was the 360 turbo. We were told it has the record for the fastest gear change — all of 350 milliseconds.

Monday morning meant we headed to the Pagani factory in San Cesario sul Panaro. This is a little-known car manufacturer, outside of petrol heads. The company was set up in 1992 but didn’t make its first car, the Zonda, until 1999. They are the supposed to be the ultimate sports car. Although a mid-engine two-seater with a Mercedes V12 engine, they cost €2.2 million. Plus options. Plus tax and VRT. Plus a two-year wait. Lewis Hamilton has one. The Zonda had been discontinued and they now make the Huayra (720bhp, 0-60 2.8 secs, top speed 230mph and named after the two-headed goddess of wind). Again, they are increasing production from about 20 cars per year to 40. Horacio Pagani, the owner, is not keen on flooding the market, as it risks depreciating his cars. We saw one that cost the original owner two million five years ago and it’s now worth seven million, so we were told. All cars are built to order, making each one unique. The highlight of the visit was seeing Horacio himself leave the building on a bike. Of course we stopped him and asked for a photo… and got it.

I could write a whole page on the Pagani car. It is a hyper-performance car, about the weight of a VW Golf, yet capable of enormous speed. However, there remains only one problem — a certain car manufactured by VW, called the Bugatti Chiron (Veyron successor). Cost is over €2 million, but it has power of about 1,500bhp and a potential top speed of 388mph. In the game of numbers, Chiron beats Huayra. However, with wrist-watches, Rolex outsells Citizen and Seiko, the latter more reliable and accurate.

The afternoon was spent at the Pannini Maserati Museum in Modena. The story of this is quite interesting, how a rich farmer who makes the finest Parmesan cheese came to own the collection of 19 Maserati cars that rightfully should be owned by the Maserati company. Anyway, despite the sat nav, we passed the museum (we didn’t realise it would be beside a few farm sheds at the end of a farm road) three times. Not alone were the historic and more recent Maseratis housed in an air conditioned building, there were a lot of old motorbikes, including some Triumphs and Nortons. They were the only ones with a steel tray under them to catch the engine oil. (How do you know your Triumph is out of oil? It stops leaking!) Outside, there are classic slot machines, ’50s petrol pumps, steam cars and a row of vintage tractors. And it’s all free.

We went from there to a feature known as Enzo Ferrari’s house, again in Modena, known locally as Museo Casa Enzo Ferrari. It was the house where Enzo was born and he sold it aged 20 to buy a race car. Later in life he made several attempts to buy it back but failed.  Again, older racing Ferraris and engines were on display — including older, much simpler Formula 1 cars. It is possible to see a room decorated like Enzo’s office. In a separate building, there were collections of newer cars, including Gordon Ramsay’s LaFerrari (€1 million), sitting there, doing nothing. This was probably the most valuable collection of cars we had seen in one place. The first four cars we saw when we walked in had a total value of about €50 million.

Tuesday morning was spent back in Bologna at the Ducati factory. We started with a factory tour, seeing all sorts of bikes being hand-built, and finished with a museum tour. Apparently, they can build and sell over 54,000 bikes per year (compared with Honda, three million bikes, BMW 140,000), their biggest market currently being the USA. Summertime production is 24 hours per day, seven days per week, with normal shifts resuming in the autumn as seasonal bike sales settle down. As the bikes are mostly hand-built, they are very flexible in building what they need. The build time for a bike is about 10-to-14 hours, depending on the model. Compare that with the time taken for an engine and gearbox rebuild!

In all, we had a great time. Several times we were told ‘please don’t do that’ or ‘please don’t touch that’. Occasionally, the reply was ‘I was fixing it’ and despite that, we got on very well with all our tour guides, always ready for a chat or to answer a question, if they could.

Thanks to Bernadette Moran and David Hepburn of OCD tours for helping to organise the ‘Boys’ Weekend’.