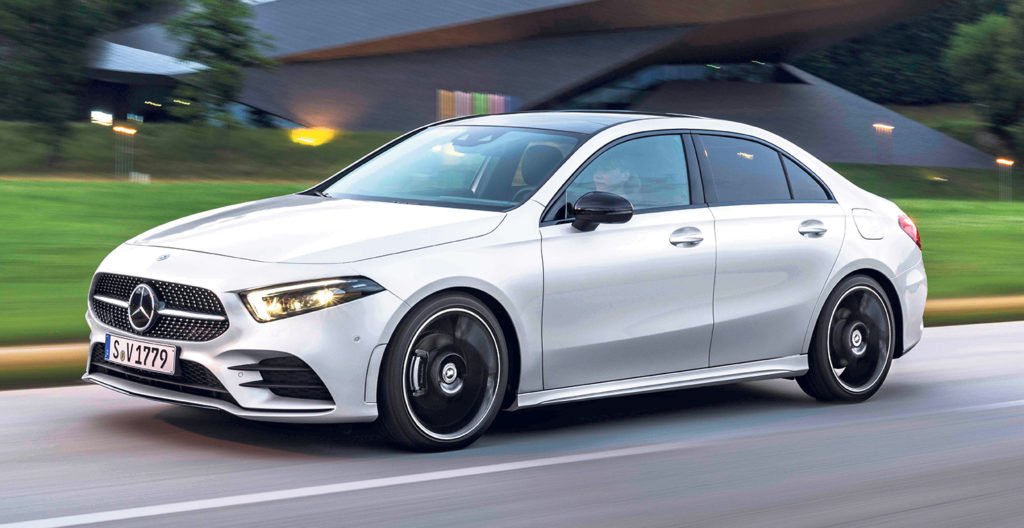 The new Mercedes A-Class saloon is a very impressive package

Many people associate Mercedes Benz with saloons. We are all familiar with S-Class, E-Class, C-Class, all saloons and perhaps a few estates with Labradors in the back. So when the A-Class was announced many years ago, it was more than a little surprising that there has been no A-Class saloon until now. For a few years we have had the CLA, which is a four-door coupé, so obviously not a saloon, as it is wider and less tall. There are design differences between the two and you would really need to see them side-by-side to appreciate the variations.

Our garage at home will just accommodate an E-Class, so it was a bit of an eye-opener when I parked the A-Class saloon and saw how close it was to the walls. Compared to the E-Class, there is a difference of just over 600mm in overall length, or about 20 inches — 60mm is the difference in width. So this may well be the ‘baby’ saloon of the Mercedes range, but small it is not.

I like the opinions of others when I drive cars and I have a few trusted friends whose opinions I value. A BMW man of several years’ standing took it for a spirited drive. He never worked out it was a front-wheel drive.

Now, I got the car during the monsoon we had to announce the start of our summer. And yes, there were moments I did drive like a teenager. And I did find the limits of handling, with the front running away ever so slightly before the traction control tidied things up. Otherwise, in the dry, the handling is nicely balanced. However, Mercedes didn’t go to the expense of making a fine all-wheel drive system for marketing purposes only. This you can order on your higher-performance A-Class, such as the yet-to-be-announced A250 with a 224bhp, 2.0-litre engine.

For the saner members of society, there will also be a 1.5-litre diesel with 115bhp. But before I get too critical of handling, remember this is a 163bhp car, all produced from a 1.3-litre engine. Despite this, in normal, even slightly aggressive driving, you will have to work hard to know which wheels are doing all the work, such is the freedom from kick-back the steering displays.

Comfort has always been a priority with Mercedes, and although this test car was fitted with the slightly firmer AMG suspension and low-profile tyres, I would still call it firmly comfortable. Mercedes have spent a lot of time in the wind tunnel with the saloon, with the result that the car has a lower Cd figure than the sleeker-looking CLA or the hatchback, which gives lower wind noise on the move. And it has a bigger boot.

Engines will be petrol or diesel, the gearbox manual or automatic, and drive trains will be front-wheel drive or all-wheel drive. Hybrid versions will be available, but I know little else about them. It is no secret that Mercedes and Tesla are collaborating on electric cars, yet the engines used in the A-Class are derived from Renault
units, itself forging ahead in the field of electric cars. Entry model is the 1.3 petrol with turbo, priced from €36,235. I got about 47mpg during my test, which was not the gentlest. If I owned the car, I may well have got more out of it. Next up is the diesel €34,200.

Say ‘hi Mercedes’, and the car will attempt what you command, if ‘she’ (it’s a lady’s voice) understands you. Seems like a Co Louth dialect has her confused at times. Various commands are apparently understood, such as ‘tune the radio to RTÉ 2’, ‘turn on seat heating’, ‘set the air conditioning’. Anyone with an iPhone will be familiar with Siri and the fun you can have when your commands are half-understood.

The multimedia MBUX (Mercedes Benz User Experience) system can be used via the steering wheel, the touchpad or the screen, which is touch-sensitive. It all makes for a very entertaining package when you are bringing a friend for a spin. Most controls are intuitive and easy to use.

Options include the extra-wide twin screen. For the MBUX a 7-inch twin screen is standard but the optional 10.75-inch screen is much better. There is an endless combination of packages available and the test car was fitted with said extra-wide screen, sat nav, mirror package and parking package, sold as the ‘advantage package’.

The ‘park package’ will get the A-Class into a parking space using parallel or vertical parking, and is not shy about using several attempts to get there, even applying the brakes itself if you’re too lazy. Expect passengers to be frightened by that experience.

Mercedes Benz prides itself on its safety record. A patient of mine drives a rescue truck. I once asked him what cars are the safest. His opinion was Mercedes, which is why he drove one himself. Irrespective of ‘the man in the truck’ opinion, Mercedes is saying there are more safety features on the A-Class than the S-Class.

Other safety and driver-support items include a see-ahead camera and radar with a range of up to 500 metres, plus numerous other features that include lane-keeping, adaptive braking and various distance control and driver assist systems. I have to say, the lane departure system frightened the daylights out of me on more than one occasion so I ended up switching it off.

Overall, the A-Class saloon is a very impressive package. It is surprisingly quiet, well-equipped, and roomy. Well worth a look.