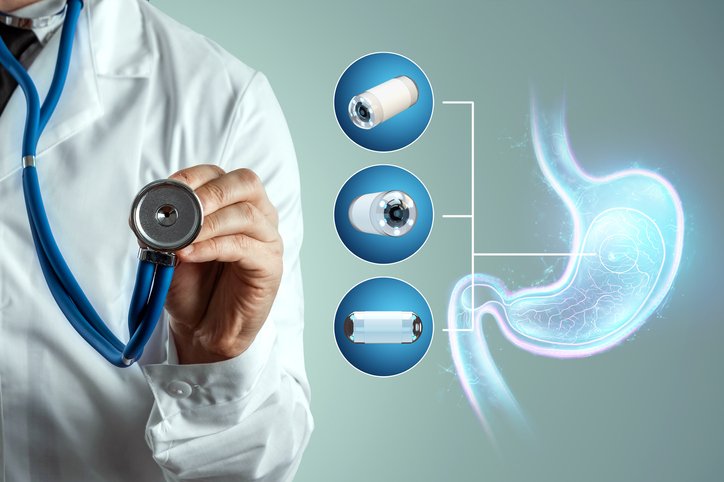 Like other healthcare professionals, dietitians choose a specialty during their career. Following three years at basic grade level, dietitians are eligible to apply for senior roles in their area of interest. It takes at least five years of further practice to be eligible for a clinical specialist role. The expertise at this level not only complements, but enhances the care of patients.

Years of working alongside our medical colleagues has given dietitians an understanding of pinch points within specialties. This opens doors of opportunity for collaboration and development. Dietitians, like other health and social care providers (HSCPs) are innovating in the management of chronic diseases such as diabetes, obesity, kidney disease and home nutritional support leading to reduced hospital admissions and use of scarce hospital resources. Dietitians working in areas of advanced practice are pushing the boundaries to assist and support the Sláintecare strategy.

Naturally gastroenterology is an area dietitians are familiar with because diet and the gastrointestinal (GI) tract are intrinsically linked. All five nutrition processes – ingestion, digestion, absorption, assimilation, egestion – depend on the viability of the gut. These processes are greatly impacted by GI disorders such as inflammatory bowel disease (IBD), Coeliac disease, and irritable bowel syndrome (IBS), and therefore patients with these conditions are at high risk of malnutrition and require dietetic input from the outset.

Dietitians assess nutritional status, diagnose malnutrition and set nutritional care plans that mitigate against poor GI function. We recently shared that 74 per cent of patients with IBS attending Tallaght University Hospital (TUH) believed their symptoms were due to what they were eating. The majority, 75 per cent, of this cohort wanted to see a dietitian but only 4 per cent got access to our services. Disappointingly, 65 per cent claimed they received no information from any HSCP about diet or their condition at diagnosis.

To quote a survey carried out by the Irish Society of Colitis and Crohn’s (ISCC), 61 per cent of patients with IBD believed their IBD specialists disregarded the importance of nutrition. However, a study of 1,562 gastroenterologists published in 2018 revealed that 90 per cent of GI doctors felt diet was as effective, if not more effective, than medications for IBS. Yet only 21 per cent of them routinely referred their patients to a registered dietitian. If nutrition is an integral part of GI care and expected by our patients, how can we deliver this in an era of lengthy waiting lists and inequitable access to services?

FGIDs are disorders of gut–brain interaction. It is a group of disorders classified by GI symptoms related to any combination of the following: motility disturbance, visceral hypersensitivity, altered mucosal and immune function, altered gut microbiota, and altered central nervous system (CNS) processing. Symptoms sometimes overlap with other GI disorders, such as non‑ulcer dyspepsia or Coeliac disease.

They are one of 33 adult and 14 paediatric conditions including IBS, functional dyspepsia, sphincter of Oddi dysfunction, belching disorders, and chronic constipation. Often these conditions coexist with others equally complex in nature. According to the World Gastroenterology Organisation (WGO), more than 25 per cent of patients with IBS-D (IBS with diarrhoea) have bile acid malabsorption and 20-50 per cent report fibromyalgia. Just over half, 51 per cent (n=93), of patients surveyed at the TUH FGID clinic had a GI comorbidity, such as IBD, Coeliac disease or diverticular disease.

Unfortunately the time taken to get a diagnosis of IBS can be up to seven years. In that time patients suffer undue anxiety and depression. Often these patients are told what it is not, rather than what it is. Patients need a positive and direct diagnosis, not a diagnosis of exclusion, because quality-of-life is low with a high prevalence of suicidal ideation. Anxiety and depression increase with severity and length of disease. In my experience the earlier these patients are seen, the better the chance of some resolution.

Deep-seated anxiety and depression are barriers to progress. TUH has reported that high HADS-D (Hospital Anxiety and Depression Score for Depression) scores are a predictor of poor therapeutic outcomes following dietitian-led diet and lifestyle intervention. Patients with FGIDs require time, a commodity in short supply at a busy medical clinic. With a high placebo response of 15-to-72 per cent reported in literature, reassurance is a powerful tool.

The exact incidence of IBS in Ireland is unknown, but estimates indicate between 9-to-23 per cent of the global adult population are affected. A population-based study in Europe found an overall prevalence of 11.5 per cent. Females are twice as likely to be affected as males with a preponderance in younger patients. Recent trends indicate a significant prevalence in the older population. In some cases symptoms date back to childhood or a previous trauma, such as abuse or bereavement.

FGIDs are a significant burden to healthcare providers globally. IBS has been associated with increased healthcare costs, with some studies suggesting annual direct and indirect costs of up to $30 billion. In 2003 the NHS spent £45.6 million or 0.1 per cent of the total annual expenditure on IBS, which in current times would equate to £115 million. We know patients with IBS visit the doctor more frequently, use more diagnostic tests, consume more medications, miss more work-days, have lower work productivity, are hospitalised more frequently, and consume more overall direct costs than those without IBS. Resource utilisation is highest in patients with severe symptoms and poor health-related quality-of-life (HRQOL).

IBS is the second highest cause of work absenteeism and presenteeism after the common cold. FGID in its various forms comprises 25-to-50 per cent of all referrals to gastroenterologists. A recent webinar noted that IBS accounts for one-in-30 patients attending primary care in the UK. Compare that to one-in-100 with Coeliac disease and one-in-250 with IBD and the size of the problem becomes apparent.

Unfortunately medical and pharmacological management has been largely unsuccessful in managing global symptoms to date. Novel drug treatments are coming on stream, but are expensive and patients have difficulty affording them and seek funding from hardship schemes. Poor clinical outcomes lead to a revolving door experience for patients and consultants alike. Repeated clinic appointments and medical or surgical procedures alongside polypharmacy are well documented issues encountered on the bumpy patient journey.

Due to unresolved symptoms patients display healthcare-seeking behaviour and often attend multiple hospital services including pain, neurology, and gynaecology. Despite this barometer of how poorly we are performing for this cohort, current clinical pathways are either inefficient or, in most cases, absent. So where should health services target and invest resources to tackle this elephant in the consultation room?

Dietetic services have been highlighted in a NICE clinical guideline cost report as a potential cost saving resource. Diet and lifestyle change is recognised as an effective primary management strategy for FGIDs. Access to correct and timely dietary advice is important as it encourages disease acceptance, but this is a challenge given what we know about dietetic staffing. Counselling should include information on general lifestyle, physical activity, symptom-targeted medication, and encourage a self-help approach. Clinical practice guidelines suggest a step-up approach, because standard lifestyle advice reduces symptoms by 49 per cent. TUH reported similar results of 46 per cent in a group setting.

Second-line advice, such as a low FODMAP (fermentable oligosaccharides, disaccharides, monosaccharides, and polyols) diet should only be considered where symptoms persist. FODMAPs are osmotically active carbohydrates known to induce GI symptoms in those with FGID. It has been shown that approximately 75 per cent of patients who are prescribed the diet report a sustained symptom response. A recent evaluation has shown that the FODMAP diet is only highly effective when implemented by specifically trained dietitians, despite a growing trend for non-dietetic education.

A new model of care

Traditionally patients with FGIDs referred to tertiary dietetic services are transferred to community dietetic services, which remain grossly under-resourced with lengthy caseloads of higher-risk patients. Even if community dietetic departments were adequately resourced, a lack of specialised training required to manage FGID means services would require investment. The nutrition subcommittee of the National Clinical Programme (NCP) for Gastroenterology and Hepatology (NCPG&H) are advocating for increased staffing in dietetics to facilitate alternative models of care.

Dietitians as the first point of contact can assess and manage these patients under the clinical governance of a consultant gastroenterologist. The dietitian-led FGID clinic at TUH is an example of the Sláintecare ‘right care, right place, right time’ model of care, which aims to triage patients to the most appropriate HSCP for their need and improve the overall patient experience.

At TUH we found patients referred from primary care with IBS-like symptoms were waiting on average three-to-five years to be seen by a consultant gastroenterologist. Approximately 20 per cent of patients attending gastroenterology clinics had a documented history of FGID. Using a quality initiative framework, a new pathway was devised whereby referrals from GPs were triaged by a consultant gastroenterologist. Patients with negative screens were diverted to a dietitian-led education programme involving face-to-face group education or individual appointments. The programme has since transitioned online due to the pandemic. Patients are reviewed by phone or via the HSE’s Attend Anywhere video call platform.

Pilot results avoided 77 new gastroenterology appointments and 68 new scope referrals (savings €47,138), with 331 patients being removed from the return waiting list for gastroenterology avoiding an estimated 110 scopes (savings €103,090). There was a 42 per cent reduction in gut hormone profiling for these patients (savings €12,210) and the return gastroenterology waiting list reduced by 10 per cent. Clinically, 46 per cent of patients have had a significant improvement in their symptoms following first-line dietary advice, with 73 per cent reporting significant improvement after low FODMAP dietary advice.

Every one, 100 per cent, of the patients attending the service would recommend it to friends and family with 97 per cent gaining useful and practical information. We also found there was a statistically significant reduction in use of medication after 12 weeks on the programme. We noted a reduction in the prevalence of anxiety from 63-to-54.3 per cent and in depression from 33.3-to-22.2 per cent in those who gained symptomatic relief.

Tallaght was the first post of its kind in the Republic of Ireland. Due to its success there have been an additional three posts sanctioned at clinical specialist level in both Dublin and regional hospitals. This is not a novel idea. The strategy of extending the scope of HSCP practice to address issues within the health system has been adopted by the UK, US, and Australia. Benefits of extended scope practitioners (ESPs) include shorter waiting times, faster diagnoses, better clinical outcomes, and increased patient satisfaction. Examples of GI dietitian-led value for money services in the UK include dietitian-led coeliac clinics, dietitian-first gastro clinics, and primary care IBS services.

These included suspected/confirmed Coeliac disease or IBD, undiagnosed low haemoglobin, gastroesophageal reflux disease (GORD) or malnutrition. The dietitian was given authority to request pathology tests and triage appropriate patients to colonoscopies and scans and provided nutritional advice where appropriate. Patients who could not be managed exclusively by the dietitian progressed to a consultation with the gastroenterologist.

We all know the phrase – If you change nothing, nothing will change. Disrupting the status quo is inevitable. In workforce submissions we need to consider skill mix for our patients going forward. Which professional does the patient need to see for optimal outcomes? The patient journey is no longer linear and does not always need to start with a doctor. We need to consider patients’ expectations and rethink the practice that all patients need to see a doctor. We need more GI specialised HSCPs, including registered dietitians, clinical nurse specialists (CNSs), GI physiologists, and GI psychologists to manage the complexities of these patients.

In the meantime, a sensible approach to managing your patients with FGIDs in the short-term would be to get other HSCPs at your practice to deliver first-line lifestyle advice to patients asper UK NICE guidelines and reserve onward dietetic referral and expertise for secondary interventions such as the low FODMAP diet.