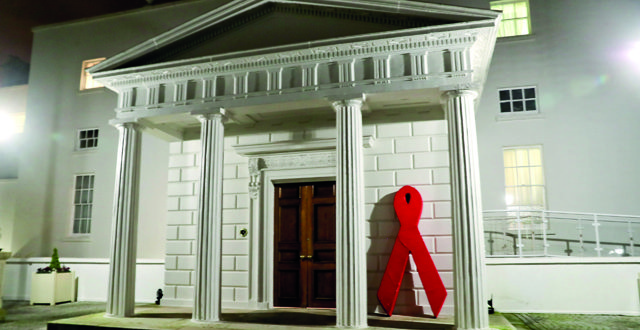 It is a great pleasure for Sabina and I to welcome you all here today to Áras an Uachtaráin on World AIDS Day, and to have the opportunity to mark the 30th anniversary of HIV Ireland. It also is a great honour for us to be here with you, and to have the opportunity to recall all those years of dedication, perseverance and hard work — sometimes undertaken in very difficult, and indeed hostile, circumstances — which began over 30 years ago.  It was indeed in difficult circumstances the work of campaigners involved in what was known as the Dublin AIDS Alliance began.

May I take this opportunity to recognise the work, not only of HIV Ireland, but also of AIDS West in Galway City, ActUp Dublin, ACET Ireland, the All-Ireland Network of People Living with HIV, Positive Ireland, GOSHH in Limerick City, and the Sexual Health Centre in Cork City.

May I also welcome the announcement that [HIV] pre-exposure prophylaxis [PrEP] will be available in this country from Monday, 4 December. The addition of another measure to prevent HIV is an important step forward.

Anniversaries are occasions not only to look forward, but to look back, and this occasion today is an opportunity to reflect: To reflect on loss — the loss of friends, of family members, of loved ones, of companions — that so many have endured; and to reflect too on the struggles in which so many have participated, the struggle for the recognition of rights long denied — the right to equality and the right to services — and the struggle against discrimination and stigma.

It is troubling now to recall the moral and ethical atmosphere of Irish society in 1982, when the first two cases of AIDS were diagnosed. Those who suffered the most in the 1980s were those exposed not only to a prejudice born of misunderstanding of HIV and AIDS, but also to other forms of social oppression which were, and are, too often manifested in our society.

At that time, contraceptives were only available through a medical prescription — as was said at the time, this was ‘an Irish solution to an Irish problem’. Our laws prohibited same-sex sexual relationships. My two predecessors in this Office, Mary McAleese and Mary Robinson, both played a significant role in the campaign — led with bravery by Senator David Norris — to overturn this discriminatory legislation.

It is perhaps indicative of those years — years in which Irish society yielded only most slowly and painfully to change — that the offending Act was amended all of five years after the European Court of Human Rights had found that the legislation was in contravention of the European Convention on Human Rights.

Our social policies were insufficient to a moment of crisis in Irish society and the citizens of our cities and towns — particularly parts of Dublin City — paid a terrible price in the 1980s.

In those years, in terms of living up to its duties to its citizens, our society and State was anything but adequate or indeed ‘republican’ in the best sense of that term.

I know that this time — a time before the development of anti-retroviral treatment — was a fearful time, a time when so many loved ones were lost so suddenly, a time so often remembered with grief, hurt and anger. It is deeply affecting to read the words of Tonie Walsh, who has spoken of the ‘hidden histories of how we lived, how we died, how some survived, yearn to be heard’.

Some of the most moving testaments of friendship that I have read are from this period and were written on both sides of the Atlantic.

We, as citizens of Ireland, do owe a duty to all those who lost their lives, a duty to remember and in that remembering, a duty to build a better future.

Some during that time did act, and today is an occasion to recognise the courage, energy and activism of those campaigners, activism often conducted in the face of ignorance and sometimes hostility.

It is also an occasion to acknowledge the great strides that have been made thanks to the efforts of those campaigners and of campaigning organisations like HIV Ireland and the work of health and social care professionals and volunteers. It is also a time to look forward to all that which must still be achieved in our own society and in countries around the world to realise the possibility of an AIDS-free generation and to ensure that those living with HIV may be able to live their lives without stigma, fear or discrimination.

At global level, there is much which needs to be done and approached with urgency.

For example, in the plan of action that 193 countries have committed for the achievements of the Sustainable Development Goals, agreed in New York in September of 2015, there is a commitment to end the AIDS epidemic by the year 2030.

These goals are ambitious, but they are realistic in their recognition of the scale of the response required to achieve them. Over 36.7 million people are living with HIV, and of these, only 53 per cent have access to treatment. The goals recognise that nothing less than universal health coverage and access to quality healthcare, including universal access to sexual and reproductive healthcare services, are necessary if there is to be a possibility of meeting them.

But if we are to achieve these goals, both at home and abroad, it is not enough merely to make additional resources available, though this is a necessary condition. We are also required to create the consciousness for more inclusive and more just societies.

Globally, new HIV infections have fallen — by 45 per cent between 2000 and 2015 — but as we are all too well aware, it has continued to increase among some of the most vulnerable groups in our societies. Only a response which eliminates inequalities based on gender, sexuality and race, raises the dignity of all people and meets the demands of social justice, will be truly capable of eliminating HIV/AIDS and ensuring that those who live with HIV can live lives free of stigma, prejudice and discrimination.

It is remarkable that the effectiveness of treatment has improved to such an extent that HIV may be suppressed such that it is undetectable in a person’s body, which means that the virus cannot be transmitted. This illustrates the continuing importance of HIV testing, as those who do not know their HIV status cannot access treatment and have the greatest risk of transmitting HIV. The provision of community testing by organisations such as HIV Ireland and the HSE is to be truly commended and must be supported.

There were 508 new HIV diagnoses notified and recorded by the Health Protection Surveillance Centre of the HSE in 2016, an increase of 35 per cent on 2011 figures.

This is concerning and we must continue to implement, support and promote, as a society, comprehensive prevention measures, including the kind of sexual health education and training which HIV Ireland have pioneered and continue to provide.

The findings of the National HIV Attitudes and Knowledge Survey and People Living with HIV Stigma Survey, carried out by HIV Ireland in 2017, reveal that there is some work to be done to improve knowledge about the transmission of HIV, particularly among younger people.

The surveys also revealed that for the 4,000 people estimated to be living knowingly with HIV in our country today, there is still a degree of stigma — stigma arising from lack of knowledge and sometimes, we must recognise, from pre-existing forms of prejudice based on a person’s sexuality, nationality, ethnicity, class or whether they are a drug user.

This stigma takes a deep toll, whether experienced at the hands of friends, family, employers or strangers and takes a deep psychological toll on lives of people living with HIV.

So, as we meet here in Áras an Uachtaráin on World AIDS Day, may I then commend the work of all those organisations here today for raising awareness of HIV among the public and of offering support and advocacy to those living with HIV. May I thank too all our health and social care professionals working in the HSE, in our hospitals and in other bodies for your dedication and your hard work.

May I also take this opportunity to salute the bravery of all those individuals who have taken a stand against discrimination.

As a people, we are more aware than ever, in this decade of centenaries, of the urgency to build, by our thoughts and deeds, a Republic of equal citizens. This demands of all us a spirit of inclusion and a duty of kindness, of compassion, and above all, of solidarity and respect towards others, whether at home or abroad.

Through your work, your advocacy, your support services and your campaigning, you are making this ‘Republic of equals’ a reality. I would like to conclude by thanking you and reiterating once again what an honour it is for us that you all could join us today.”