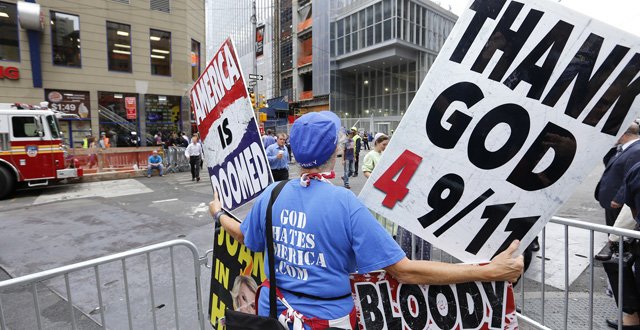 It’s easy to forget that the original Star Trek series went where ‘no show had gone before’ in its efforts to promote racial and cultural diversity and featured a multi-ethnic crew and the first inter-racial on-screen kiss. It is even more ironic, then, that a bunch of what can be most kindly described as misguided idiots tried — and happily failed — to picket his funeral.

The Westboro Baptist Church has a reputation for picketing the funerals of soldiers and celebrities with placards featuring the most offensive and reprehensible slogans (pictured) such as ‘God hates your prayers’, ‘God killed your sons’, ‘Pray for more dead soldiers’, ‘Thank God for 9/11’… the list goes on but I won’t soil these pages by repeating any more.

Their children are often brought along and instructed to hold up these signs at pickets.

Shortly after Nimoy’s death from COPD at the age of 83, the Westboro Baptist Church announced via Twitter its intention to picket his funeral because of his friendships with gay actors George Takei (Mr Sulu) and Zachary Quinto, who played Spock in the reboot of the Star Trek movies in recent years. They also intended to protest at the funeral because of Nimoy’s friendship with William Shatner (Captain Kirk), a vocal atheist.

Thankfully, God also hates morons. Despite their efforts, nobody shared the location of the funeral on Twitter so they were left at home with their placards. Nimoy was peacefully ‘beamed-up’ at a small, private Jewish ceremony near his LA home.

Bearing all this in mind, and as an aside, I would urge any reader capable of doing so to make sure they vote in the upcoming same-sex marriage referendum.

But the final word rightly goes to Nimoy himself. Here’s his poignant last tweet:

“A life is like a garden. Perfect moments can be had, but not preserved, except in memory. LLAP.”

Kudos to Dr Shane Bergin of TCD, whose DARTofPhysics campaign to bring science to life for commuters has been such a success, he’s looking to expand it to the London area.

The social media initiative began in 2013 and was based on the idea that dreary DART commutes can be made more interesting by stimulating travellers to think about the science around them.

For example, it asked questions such as: ‘What happens when you put a Ferrero Rocher on the van der Graff?’ and ‘Why does the metal pole on the DART feel colder than the seat?’

“The facts have really captured people’s imagination. Kids have been going into schools asking their teachers about them,” said Dr Bergin at the Association for the Advancement of Science Annual Conference in California, US.

“I’d like to think people can talk about physics in the same way they talk about politics and sport. People see physics as something that’s a bit ugly; they see it as necessary from an economic point of view but I don’t think people really connect to the beauty of physics.”

He continued: “It’s amazing that the person standing next to you, no matter how close you are, is predominantly empty space or that everyone on the carriage is attracted to you — albeit gravitationally. Similarly, everyone is ‘hot’ — albeit thermodynamically.”

Newton’s Third Law means that every time a train pulls out of the station, the Earth rolls back ever so slightly, says Dr Bergin.

“Every time the train rolls off, the Earth rolls back by small amounts. These things are true and they are based on very fundamental, very simple physics. That’s the sort of stuff that will connect with people.”

He hopes to explain to Londoners, for example, that the time of day affects the tone of Big Ben.

“Big Ben’s gong is at a lower pitch at night than it is during the day,” he says. “It will cool down and it will produce a different note when it is sounded at night, and similarly at night, because the air is colder, the sound will travel much further as well.”

Londoners will also find out that it takes light the same amount of time to travel from the sun to the Earth as it takes the train to get from Kennington to Leicester Square.

I’m grateful to the reader who took the time and trouble to email me this gag.

A lady walks into a private clinic in the US and asks the dermatologist how much he would charge to surgically remove a benign growth.

“The entire procedure would cost $300,” he informs her.

“That’s a lot,” she says, scratching her chin. “There has to be a way you can do it for less?”

“Can’t you do it any more cheaply?” she asks.

Again, the doctor has a think: “Maybe if we cut back on the disinfectant, I could do it for $100,” he says. “How does that sound?”

“Perfect,” she says, “I’d like to make an appointment for next Tuesday for my husband Jack.”