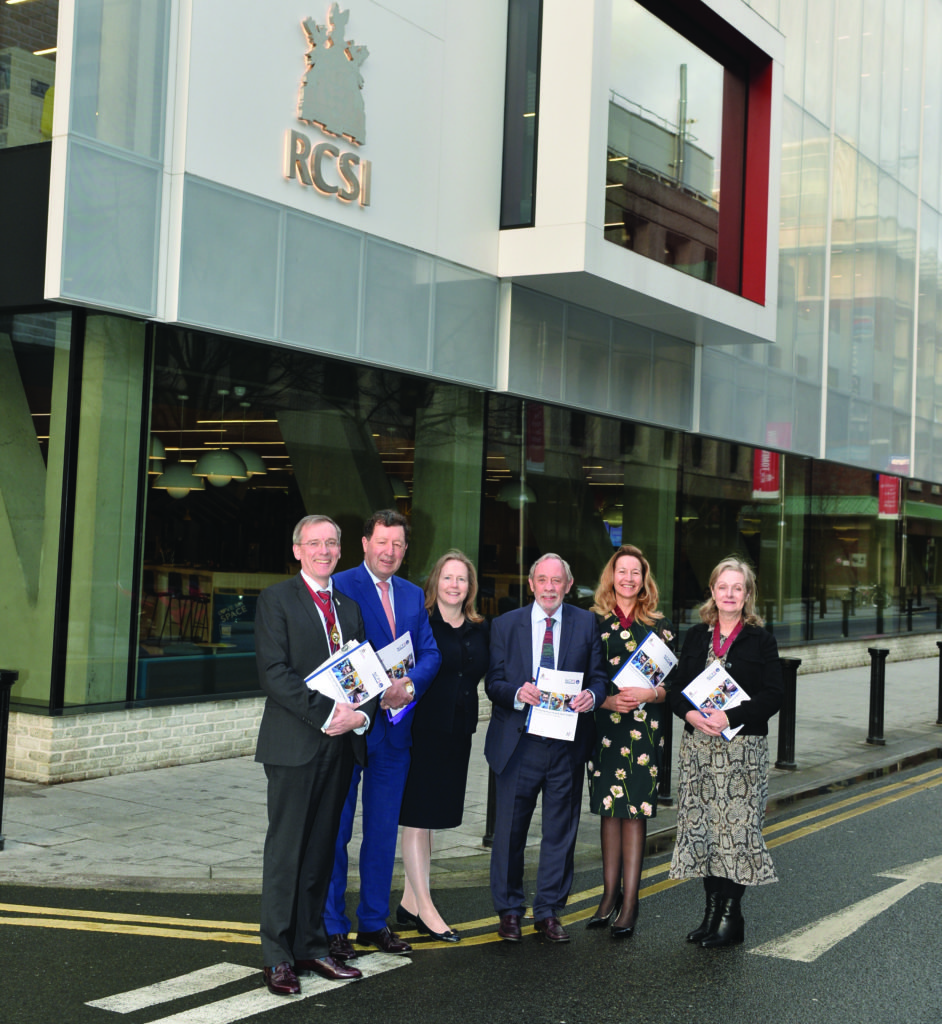 A new model of care for head and neck surgery was recently launched. David Lynch speaks to Prof Michael Walsh, National Clinical Advisor for ENT, about what the model means for the specialty

Otolaryngology Head and Neck Surgery: A Model of Care for Ireland was recently launched in the RCSI and the document points to significant changes in the specialty.

According to the model of care (MoC), otorhinolaryngology — head and neck surgery (ORL-HNS) is the oldest and third-largest of the surgical specialties in Ireland. It manages disorders of the ear, nose and throat and related structures in the neck and the skull base.

The document notes that complex and unscheduled admissions to ORL-HNS “generally receive prompt care”, but admits that significant challenges arise in the delivery of a safe, efficient service for outpatients and patients requiring less complex scheduled surgery.

“It’s a framework for the HSE on how we can improve the quality of care for outpatients, especially since ear, nose and throat (ENT) has the longest number of patients waiting for outpatient assessment,” Prof Michael Walsh, National Clinical Advisor for ENT to the National Clinical Programme in Surgery (NCPS) and the author of the new model of care, told the Medical Independent (MI). “What we are trying to do in this framework is to give them a strategy to try and triage these patients more quickly. Our specialty deals with all age groups, from children right up to the elderly, so there is a huge spectrum of disease that presents to ear, nose and throat doctors.

“So basic things like hearing loss that is very common in the elderly population; a lot of these patients are waiting for excessive periods just to have a basic hearing assessment carried out.”

The new MoC sets out to create a situation whereby utilising auxiliary health professionals, the “majority of them [patients] can be seen and treated by the audiologist or speech therapists and discharged to the GP, rather than waiting endless months or years for a consultant outpatient appointment”.

In terms of the end-goal plan, Prof Walsh said “basically, what we are trying to achieve is that consultants should only be seeing the complexities, the things that need major treatment. They should not have to be triaging out every sore throat; that can be done much more efficiently by other healthcare professionals.”

The foreword to the MoC notes that: “Using models of care, it is estimated that referrals to outpatient departments will reduce by one-third, helping to reduce waiting lists and allowing all patients to benefit from quality improvement in all aspects of care.”

So after the publication in February, what are the most important next steps that the HSE and the Department of Health could make to move this forward?

“We would like them to have a longitudinal policy of the modular training for GPs,” according to Prof Walsh.

He also noted an ongoing “problem with audiology in this country,” that needs to be addressed.

“We have a fantastic postgraduate degree coming out of UCC [University College Cork] now, where the graduates have a Master’s in audiology,”  Prof Walsh said.

“These people are highly skilled, well capable of doing direct referrals, but their salary scale in the public system is very poor. There have been ongoing trade union disputes with the HSE and the Department going on for years regarding the pay scales of audiologists.

“They come in at a very low (pay) level, so most of the graduates to date have not gone into the public system; they have gone into private practice, which is a terrible shame. That is definitely a major hindrance to us developing audiology, in both the hospital system and the community. That has been going on for years and it is holding the thing up.”

The first two recommendations in the MoC point to a shift towards primary care, with the document saying that medical treatment of rhinitis and a proportion of ear microsuction can be treated by GPs who are appropriately trained in ORL-HNS procedures and also that each Hospital Group is to appoint a consultant as educational lead to roll-out the GP education programme.

All of this seems in line with the overall thrust of Sláintecare, the Government’s 10-year plan for health, which envisions a significant shift towards patient care provided in the community.

“Up to 25-to-30 per cent of patients who routinely come in as ear, nose and throat outpatients could be treated by the GP, if they were appropriately skilled-up,” Prof Walsh explained.

“A core part of our model of care is that we would have a threshold of GPs in each hospital region who would be skilled to treat these patients and act as a kind of filter before being referred into the hospital — so consultants would only be seeing cases that are really appropriate.”

Prof Walsh said this process has started, with modular workshops  in Sligo and Waterford proving “extremely successful”. Also, workshops were run in the Royal Victoria Eye and Ear Hospital, Dublin.

He mentions the work of Miss Camilla Carroll, ENT surgeon,  who is the educational lead for ENT in primary care and is responsible for rolling out the GP education  programme  nationally.

“We have had over 200 participants. Approximately 100 are now accredited to deal with these things, they purchased the equipment and they are already active in the community,” he added.

However, Prof Walsh warned that providing funding is challenging.

“As you know, the GP contract has not been finalised. We have found GPs to be, despite the low morale and the number of GPs leaving [practice], we have found them to be very enthusiastic — the waiting lists for our modular workshops are quite long.

“Huge numbers of GPs are interested in this. Even though they do not get significant reimbursements for the public patients, they are still willing to go ahead and do it for the betterment of their patients and also for their own enjoyment of their professional practice and skills.”

But would a successful negotiation of a new GP GMS contract assist this work?

“It would be helpful,” Prof Walsh replied. “We have the skills with the GPs; microsuction of ears and nasal assessment are on the negotiation table as procedures that the GP would be reimbursed for in a meaningful way. It certainly would help. But to date, it has not been a hindrance to the GPs’ desire to get involved.”

According to the MoC, there are 51 public consultants in ORL-HNS, 10 in private practice and six locum consultants, bringing the total to 67 in Ireland.

Recruitment and retention of consultants is a major challenge across the health service, and ORL-HNS is no different.

“We do not have enough consultants,” Prof Walsh warned.

“Our object in this model of care is that we want to deliver a consultant-delivered service, so that any public patient should have the right to see a consultant at least once on their visit to a hospital. We have very low number of consultants in ENT per head of the population.

“It is impossible with these numbers to give a consultant-led delivered service. We have a very high dependency on our trainees; they are essential. But they are trainees, and in other countries trainees are protected and have educational contracts, while our trainees have a huge service commitment.

“So we want to get our consultant numbers up so we can provide ratios that deliver a consultant-delivered service with the various sub-specialty interests.

“We are not saying we have to treble our consultant numbers in two or three years — we are giving them strategies to phase all these things in.”

Similar to plans in other specialties, the MoC envisions care organised into four specialty ‘hub’ locations and four ‘spoke’ sites across the country.

Prof Walsh said these suggested hub sites are for head and neck cancer only; for general ENT services, there would be six hub sites outside Dublin. “Our specialty is slightly different than other specialties in the sense that the large model 4 hospitals — by natural process, they carry out major complex procedures. Because they have so few beds, the routine work does not get a look in,” Dr Walsh said.

“That is why we have such long waiting lists for inpatient and day-care surgery. What we suggest is that they use the model 2 hospitals. A lot of them have been kind of downgraded for various reasons, yet they have resources there that could be utilised for day case surgeries.”

It is up to the National Cancer Control Programme to pick the sites for the hub-and-spoke model.

“The National Cancer Programme has not yet designated head and neck cancer sites [yet], I’m not sure when they will do it,” according to Prof Walsh. “As far as we understand, they are holding back now because of the proposal to reconfigure the Hospital Groups. That will delay things further.”

A move on this would mark a significant change in the specialty, according to the Professor.  “We are one of the few cancers that hasn’t been given designated centres, so we have no designated funding for head and neck cancer,” Prof Walsh said.

“It is essential, of course. All these other cancers have been designated and have proven better outcomes and better patient access. We are recommending there should be four designated head and neck cancer units for the country. These centres will carry out complex care, where there is more than one surgical team involved, such as ear, nose and throat… facial surgery.”

Almost two years in development, Prof Walsh downplays the amount of work he has put into the document.

“The concepts, to be honest with you, are bog-standard common sense,” he said.  “Pick a person doing their Leaving [Cert] and ask them to put a strategy into place to deal with long waiting lists [and they] could come up with something like this. It’s not high rocket science.”

However, he remains hopeful about the MoC, which includes strategies that he said are “cost-effective and efficient”.