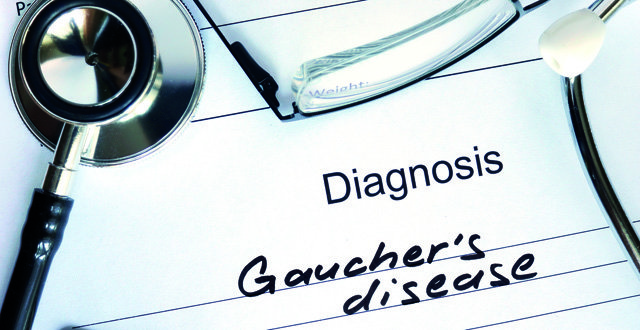 Gaucher’s disease (GD) is an inherited disorder of the human metabolism caused by deficiency of an enzyme, β-glucosidase (GBA1). As a consequence, there is accumulation of incompletely-degraded material in major target organs such as the bone marrow, liver, spleen and bone. Clinical manifestations include anaemia, thrombocytopaenia, hepatosplenomegaly and bone disease characterised by episodic or chronic bone pain and risk of osteonecrosis (primarily affecting the femoral head). A small subset of patients is also at risk of developing neurologic complications in infancy or childhood, manifested by problems with eye movements and seizures, and ultimately reduced life expectancy. In the most severely affected with primary neurologic complications, disease progression leads to death by two-to-three years of age or earlier, whereas those with an ‘intermediate’ course may live into their 40s and 50s. On the other hand, those without neurologic involvement have a normal life span.

GD is transmitted as an autosomal recessive (AR) trait, and both males and females can develop complications related to GD. Thus, family history can provide an invaluable clue to diagnosis in patients presenting with suggestive signs and symptoms. Every individual has two copies of every gene, inherited from each parent. With traits inherited in an AR fashion, carriers do not develop signs and symptoms related to the primary metabolic defect. Carriers are those with one defective gene copy (inherited from one parent), and a second (unaffected) copy (inherited from the other parent) which makes up for the partial deficiency. Individuals who inherit a defective gene copy from carrier parents (ie, both) do not have a functional enzyme sufficient to deal with the metabolic demands of the cell, and thus accumulate material. It should be noted that biochemical (enzyme) testing does not reliably detect carriers of GD, and screening for carriers among relatives of an affected individual requires genetic (DNA) testing for confirmation.

Signs and symptoms of disease can develop at any age, from infancy to adulthood. The age at onset is partly explained by the nature of the underlying gene defect, wherein those with more deleterious mutations tend to have an earlier age at presentation, while those with residual enzyme activity associated with milder gene defects have a later onset. The diagnosis of GD can be readily confirmed by blood tests, primarily measuring the activity of the responsible enzyme GBA1, complemented by genetic (DNA) testing. As the majority of patients, particularly those without a family history, may at initial presentation be suspected to have an underlying malignancy, a referral is often made to a haematologist. In cases wherein a bone marrow biopsy is performed, the presence of storage cells (so-called ‘Gaucher cells’, ie, lipid-engorged macrophage) may lead to suspicion of a ‘storage disease’, including GD. For certainty, confirmatory testing by the combination of biochemical and genetic tests remain essential.

Long-term follow-up of patients with GD has revealed that affected individuals have an increased risk for gallstones, osteoporosis, multiple myeloma (MM) and Parkinson’s disease (PD). The basis of these complications is not fully understood, although several studies have provided suggestive mechanisms: In the case of gallstones, this may be partly due to changes in lipid profile, with the accumulating material (substrate) being concentrated in the gallbladder and precipitating out of solution. An abdominal ultrasound once every two-to-three years, or more frequently in symptomatic patients, can be undertaken to assess liver and spleen volume and for the detection of gallstone formation.

The risk for osteoporosis may be a consequence of activation of osteoclasts, one of the principal cell types affected in GD. Ultimately, there is an imbalance in the turnover of bone, such that bone loss occurs primarily during the period of growth; those untreated individuals do not achieve a good peak bone mass at the time of skeletal maturation. There may also be further loss of bone mineralisation during adulthood. Patients with osteoporosis may be at risk of developing atraumatic fractures. Serial bone density monitoring of adult patients >35 years and older is often undertaken to identify those at risk.

The risks for MM and PD remain subjects of intense investigations, which will be briefly described following a short digression on therapeutic approaches, for reasons that will become apparent.

ERT involves the regular fortnightly infusion of a recombinant enzyme formulation. Treatment is well tolerated, although some patients may develop an allergic or infusion reaction to the drug, which may be managed by premedication and a slower rate of administration. The majority of patients on infusion therapy receive treatment at home, facilitated by visits from a nurse trained in the administration of the enzyme.

SRT entails the oral intake of a small molecular drug that limits the synthesis of the material that ultimately needs to be broken down, and thus helps to establish a chemical balance within the cell, preventing build-up of substrate. Although approved by the regulatory agency in Europe, SRT for GD is awaiting reimbursement authorisation.

Although currently available therapeutic options stabilise or reverse the cardinal manifestations of GD, with treatment enabling improvements in blood counts, reduction of hepatosplenomegaly and prevention of bone disease, they do not appear to have eliminated the risk of MM and PD. Fortunately, the risk of developing MM and PD is low, but unfortunately, there is currently no test to predict which of the GD patients followed in clinic will develop these complications. Furthermore, family studies have shown that the small but finite risk for PD appears to apply also to carriers (ie, those with a single defective gene copy).

A study in the US involving 2,742 patients with GD enrolled in a registry programme revealed 10 individuals with MM, yielding an estimated relative risk of 5.9 (95 per cent confidence interval [95 per cent CI]: 2.8, 10.8), compared with that expected in the US population of similar attained age and sex (Rosenbloom BE, Weinreb NJ, et al. Blood. 2005;105(12):4569-72). For context, the majority of patients in the GD Registry were young or middle-aged adults at the time of their last follow-up, with only 14 per cent older than 60 years.

One of the hypotheses relating to the increased risk for MM may be due to chronic stimulation of the immune surveillance, leading to disturbances in invariant NK-T cells that depend on sphingolipid metabolism to deliver a physiological response (Ayto R, Hughes DA. Crit Rev Oncog. 2013;18(3):247-68). In practice, it is recommended that adult patients with GD be screened for gammopathies on a regular basis, at least once a year.

A retrospective, observational study conducted in the US over a period of 10 years, involving 19 patients with GD and parkinsonism, found that some had an earlier age at onset of parkinsonism and evidence of mild cognitive dysfunction, whereas others had a later, slower course. This and other studies suggest the nature of the underlying GBA1 defect and GD disease severity are not a reliable indicator of likelihood of developing PD, or the course of PD (Lopez G, Kim J, Wiggs E, et al. Neurol Genet. 2016 Mar 4;2(2):e57).

A few years ago, mutations in GBA1 were unexpectedly found to be a common genetic risk factor for PD and dementia with Lewy bodies (DLB) (Sidransky E, et al. N Engl J Med. 2009;361:1,651-1,661; Nalls MA, et al. JAMA Neurol. 2013;15:1–9). Indeed, investigations of a large group of patients with PD and DLB revealed an odds ratio for carrying a GBA1 mutation to be >5 and >8, respectively, when compared with age-matched individuals in the general population. Among individuals of Ashkenazi Jewish ancestry (a population with a high incidence of GD due to a founder effect), the age-specific risk for PD at 60 and 80 years of age has been estimated as 4.7 per cent and 9.1 per cent among patients with GD, 1.5 per cent and 7.7 per cent among carriers (heterozygotes), and 0.7 per cent and 2.1 per cent among non-carriers, respectively (Alcalay RN, et al. JAMA Neurol. 2014;71(6):752-7). Founder effects imply a risk for a genetic disease, which is increased in a group of individuals on account of shared descent.

One or more mechanisms for the association between GD and PD/DLB have been proposed, including gain of function caused by GBA mutations, which increases α-synuclein (α-syn) aggregation, and/or loss of function due to lysosomal enzyme deficiency, which affects α-syn clearance (Li Y, Li P, Liang H, et al. Cell Mol Neurobiol. 2015;35(6):755-61). α-synaccumulation is a characteristic of Lewy body formation, seen in patients with parkinsonism (and in some cases dementia), diseases collectively known as Lewy body diseases. The processes responsible for α-syn accumulation and how it contributes to neurodegeneration in these disorders has not been fully elucidated.

On the whole, GD disease severity, at the time treatment is initiated, appears to influence outcome. Thus, early diagnosis and monitoring of affected individuals is critical so therapy can be initiated in a timely fashion, when indicated. As a genetic disorder, relatives of an affected individual with GD should be offered appropriate genetic counselling. Moreover, all diagnosed patients should be reviewed at least once a year or more often when new symptoms arise. Monitoring enables assessment of disease progression and response to therapy.