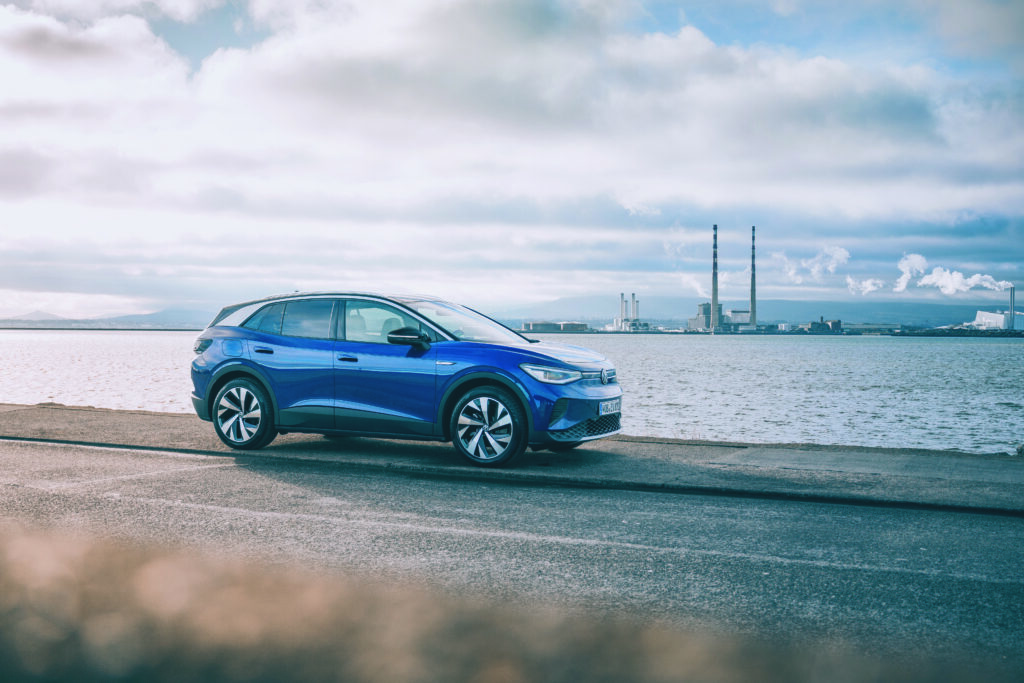 For many years, saloon cars have dominated the car market. Whether it is the VW Beetle, Golf, Ford Escort, Focus or otherwise, it is generally a saloon or more recently (in the grand scheme of things) the hatchback.

Golf was VW’s bestseller, but now the Tiguan, AKA the SUV Golf, has taken over. VW have been preparing for electrification of their cars for years, hence the ID.3 I wrote about some time ago. Now the bestseller, the Tiguan, has been blessed with the electric treatment, and I became one of the first to drive one.

With Covid there are no more car launches, hence a lateral thinking approach is necessary. So the cars prepared for the German launch have been spread around and in Ireland we got a left-hand-drive ID.4 to play with.

Now let’s get the “Yeah, buts” out of the way. I have had several conversations with people who are trying to convince me the ICE (internal combustion engine) remains alive and kicking. As a petrol head I find it difficult to imagine a world without one. No doubt through these pages I will be bringing fine examples of such cars. My argument is that for everyday use, for the vast majority of driving, the electric vehicle will make a big difference.

If you’re not prepared to lose a little on the swings to make the gains on the roundabouts, that’s fine too. The secret of living well with a BEV is to have it plugged in and fully charged from home as much as possible.

Now we have the negatives out of the way, let’s talk about the positives. The ID.4 is based on the Tiguan, sharing the ID.3’s MEB platform yet being bigger than the aforementioned Tiguan (longer, wider, and taller) in all dimensions. Up close it feels bigger than it should. Inside, despite the floor being a little taller than you’d expect, it is quite roomy. Power comes from the E-Motor, slung across the rear axle, and is so compact it can fit in a sports bag.

The same motor is used in the ID.3 and can be rated at 148bhp up to 210bhp as used in today’s car, the ID.4 first edition. Because there is no large, heavy, hot ICE in the front, crash safety is improved as it allows better crumple zones, as well as an extra boot (+1 for BEV).

VW is including its “Hello ID” communication system, giving you voice control over the functions of the car. It can open or close the sunblind on the panoramic roof – or interfere when you’re singing. Standard on the first edition is the heads up display which gives speed, speed limit, lane assist, and navigation directions displayed as if on the surface of the road ahead of you.

Unfortunately, the same cannot be said for the batteries as the motor, the bane of the BEV’s life, but they are fitted under the floor, contributing to the exceptionally low centre of gravity. On the test drive I just happened to come across a roundabout with no-one about, so I did what any self-respecting hooligan would do.

I floored it. What amazed me was that despite the wet road, low outside temperature of 5.5°C (but winter tyres, typical German attention to detail-and they were good), it didn’t shift, squirm or squeak at all. Just went around a full 360 degrees. I was quite surprised by a car that weighs just over two tonnes and that is one of the exceptional things about the electric car (+2 for BEV). I’m told there is a torque vectoring differential that distributes power on socialist principles, less to the wheels that need less and more to those that need more. Anyway, I thought the car was a four-wheel drive it felt so secure.

Oh yes, the batteries. Entry level models will be available later this year with the lesser powered 52kWh battery, with what is called the WLTP range of 340km.

VW in collaboration with other European manufacturers have established the Ionity range of fast chargers (equivalent to the Tesla Superchargers). At the other end of the spectrum, with a domestic socket, as you would use for a kettle, you can expect a full charge in nearly two days, or about 10km per hour. Hence the need to get a special wall adaptor for the house.

I’ve no idea of the running costs, but anyone I’ve spoken to about fuel costs say they are delighted as they’re so low. As there are fewer moving parts in a BEV than in the ICE car, there will be less servicing. But everyone is doing less mileage in these Covid times, so it is hard to quantify this fully. Anyway, +3 for BEV.

In summary what you are getting is VWs entry into the compact SUV market. It is refined, quiet, (is that +4 for the BEV?), smooth, stable, and quick enough for most needs.