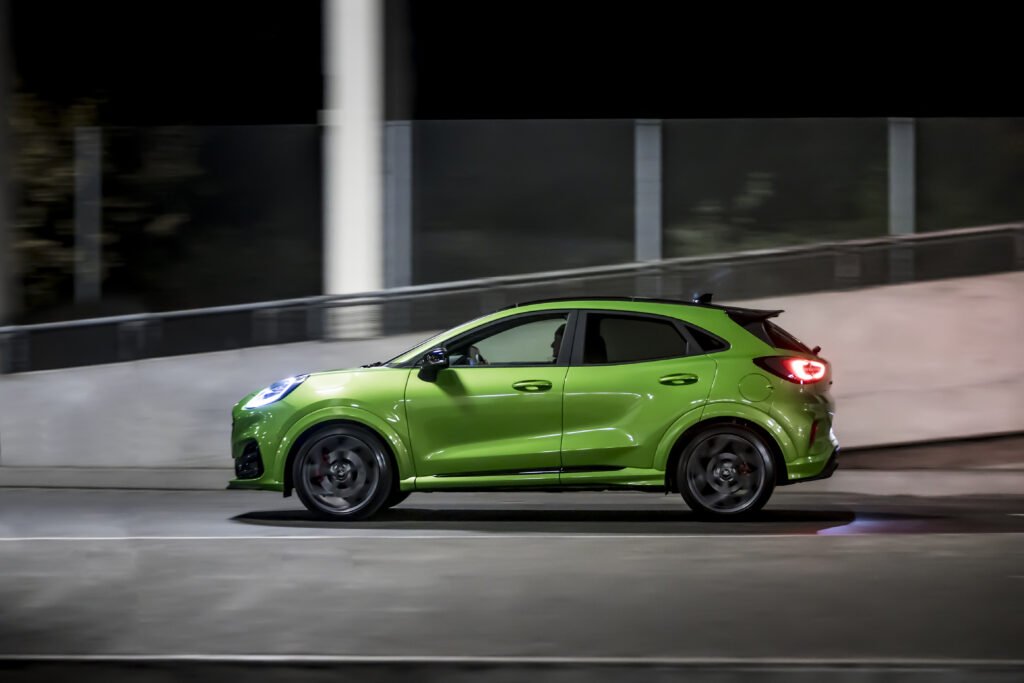 If you’re facing a situation where practicality or family needs have steered you in the direction of a crossover SUV – but you don’t want to go too ‘sensible’ – fear not as Ford is here. In the new Puma ST, you can pootle around suburbia being Dr Jekyll to your heart’s content, comfortable in the knowledge that at a moment’s notice, you can drink the elixir, push that Sport button and release Mr Hyde.

While testing this car, I kept comparing it to the fantastic Ford Fiesta ST I tested for the Medical Independent two years ago; but that was the wrong thing to do. You can’t look at the Puma ST through the same lens as you do a hot hatchback. The Fiesta ST handles like it’s on rails, whereas the Puma ST has a little bit more body roll in the bends. The Fiesta ST is trying to break your spine whenever it drives over a pothole, whereas the Puma ST takes them in its stride. So trust me and don’t compare this car to a hot hatchback because it’s not; it’s a hot crossover and that’s a different animal.

The Puma ST comes with a 1.5 litre EcoBoost (turbocharged) 200hp petrol engine with a six-speed manual gearbox getting a respectable 6.0l/100km. It’s a front-wheel drive car, but there wasn’t a whisper of understeer while driving it. The test car came with a mechanical limited slip differential to help in the bends. This car is the first Ford performance SUV in Europe to feature a bespoke chassis, which is 40 per cent stiffer than the Fiesta ST to counter the higher centre of gravity. It also boasts force vectoring springs to support the Puma ST’s agility.

The turbocharged 1.5 litre engine gets the Puma ST from 0-100km/h in 6.7 seconds. In order to deal with the power upgrades, the ST’s steering responses are 25 per cent faster and its brakes are 17 per cent larger than the standard Puma. I found second gear in this car to be a complete antichrist, so beware of it because it takes off like a bullet.
According to Ford’s Performance Manager for Europe, Stefan Muenzinger: “We believe that we have the best-handling small SUV in its segment. It really does feel connected and has the true ST feel. It is a joy to drive.”

The Puma ST offers a number of modes: Normal, Eco, Sport, and Track, each of which does exactly what you’d imagine. The Track mode also has launch control, to shoot you off the line at Mondello. Of course the styling has been upgraded from the average Puma, with more pronounced wheel arches, a Ford Performance-embossed splitter integrated into the front bumper, a large rear roof spoiler and a diffuser incorporated into the rear bumper.

There are also the signature ST upper and lower grilles, which Ford claim are designed to deliver increased engine cooling capability. There are a number of special colours available for the Puma ST, like Mean Green and Fantastic Red, not to mention that there’s a gloss black finish for the roof, grille surrounds, side spears, door mirror caps, and rear roof spoiler as standard.

The interior is also festooned with ST bling, like the big heated Recaro racing seats, covered with grippy Miko dinamica material, Ford performance skid plates, a flat-bottomed leather steering wheel and an ST gear knob. One of the cherries atop this wonderful, dual personality, automobile is the nightclub standard sound system they’ve shoehorned into it. Audiophiles amongst you will know that Bang and Olufsen are some of the best in the business, whether you’re playing Beethoven or Biggie Smalls.

As for family positive perks, the Puma ST offers a gigantic uncompromised loadspace of 456 litres, thanks in part to the MegaBox, which Ford claim will comfortably accommodate two golf bags in an upright position. According to Mr Muenzinger: “Real driving enthusiasts aren’t going to settle for less excitement just because life demands a more ‘sensible’ car, so our number one priority was that the Puma ST had to be as exhilarating and capable as every ST model, without sacrificing any of Puma’s practicality.”

The entry price for the normal Puma is €26,069, while the ST starts at €41,813. It’s a practical, fun car that will serve all your Dr Jekyll and Mr Hyde needs and wants. From trips to the beach with the kids to a barnstorming burn around Mondello Park.