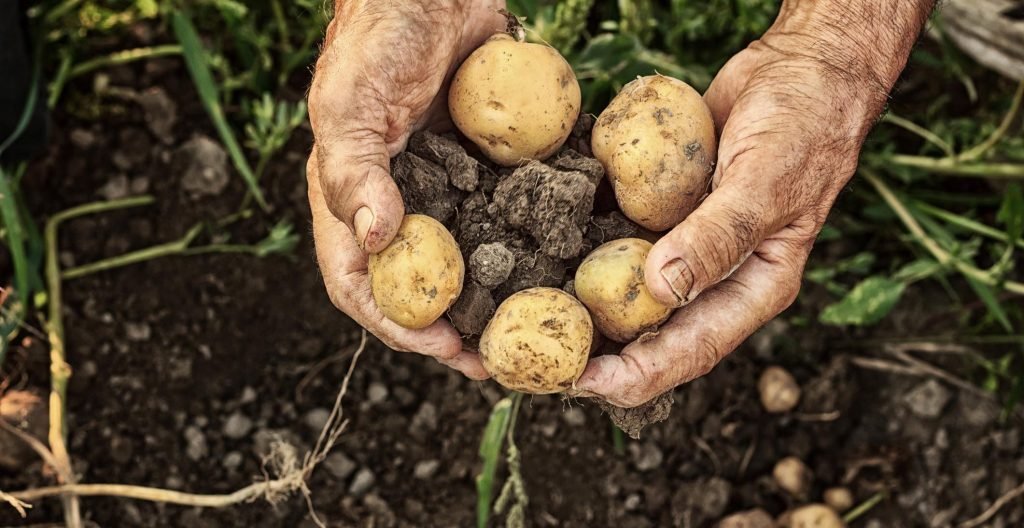 Tom Doorley on the benefits of resistant starch

The sense of wellbeing induced by carrying a basket of fresh produce from the garden into the kitchen the other day was a reward for all the hard work during the darker, colder days of the year. And while we eat with both our eyes and our palates, it was a reminder that part of the pleasure of food involves smell.

Rising from my basket was the clean, fresh, green pungency of mint and the nostalgic, childhood-evoking essence of strawberries that were still warm from the sun. Also in there was some asparagus and a few new potatoes.

These, for us low-carbers, are a rare treat and I grow just a few in the polytunnel. Simply steamed, lathered in melted butter, anointed with a few flakes of sea salt, they are one of the best things to eat. The strawberries, too, are a rare treat. My few plants deliver for about a week each June.

It took me years to give up the habit of a lifetime and eat them without sugar but these days I like them quartered, sprinkled with a little lemon juice, served with double cream.

Such very seasonal treats, we tend to think, are worth the glucose spike.

One of the incidental benefits of the new potatoes is that some of them will end up in the fridge, to be sliced and fried in olive oil the next day. This process — of cooking and cooling — converts some of the starch into resistant starch (RS).

This stuff resists digestion in the small intestine and is classified, therefore, as a form of fibre. It goes on to greater things in the large one, producing short-chain fatty acids (SCFAs) when fermented by the gut bacteria. These SCFAs, such as butyrate and acetate, in turn are of great benefit to the microbiome. Among other functions, they provide energy sources for the epithelial cells of the colon.

This is good to know, of course, but from a self-indulgent point of view, what interests me mightily is the suggestion that I can eat cooled and reheated potatoes as part of a low-carbohydrate diet. And not just sauté spuds. We’re also talking pasta, one of those potentially wonderful items to which those of us on low-carb, high-fat diets say goodbye. We sometimes dream of tagliatelle alfredo and fantasise about simple spaghetti alla carbonara.

Well, it all seemed a little too good to be true and I started thinking that if resistant starch is so great, toast made from white bread taken straight from the freezer must be a rich source. It has been cooked, cooled, cooled even more and then cooked again. If someone had waved some toast at me at this stage, my reaction would have been utterly Pavlovian.

And yes, I found a research paper in the European Journal of Clinical Nutrition titled ‘The impact of freezing and toasting on the glycaemic response of white bread’ (https://doi.org/10.1038/sj.ejcn.1602746).

Cutting to the chase, the bread that had been frozen, defrosted and then toasted produced a significantly reduced glucose response. But what of pasta? Yes, it seems to be the same, and there are several scholarly articles with myriad figures through which I waded, only to emerge on the other side with a sense that reheated pasta is better in glycaemic index terms than the freshly-cooked version. But by how much?

Dr Chris van Tulleken conducted a very small trial for a BBC television programme in 2014, which suggested that reheating pasta reduced its glycaemic load by as much as 50 per cent. This is good, but not great from my point of view. Figures for reheated potatoes suggested a reduction in their glycaemic index of 30 per cent to 40 per cent which, again, is good news, but not enough to make me feature them regularly in my diet. And while a significant southeast Asian trial found that white rice refrigerated for 24 hours before reheating had 2.5 times the amount of RS in the freshly-cooked version, I’ve never been a fan of white rice.

Of course, if you are concerned solely with gut health, it’s a different picture. Why would you ever eat pasta that had not been reheated? The trick, of course, is to undercook your pasta by a couple of minutes so that it can finish the process when being heated through in the sauce. I firmly believe that the relationship, so to speak, between pasta and sauce is better when done like this. It seems more integrated and, therefore, more delicious.

One thing to bear in mind is that when you drain pasta and just let it cool, it will coagulate into a sticky mass. You need to toss it, when still hot, in some olive oil. There seems to be some evidence that refrigeration overnight, rather than merely cooling, will be more effective in increasing RS.

There remains, of course, the question of what to drink with your RS-maximised pasta and, of course, much will depend on the sauce. With carbonara — using just egg, pancetta and Parmesan, or guanciale and Pecorino, if you want to be pedantic — my top picks would be Gavi or Soave.

With tomato-based sauces and even ragù (which, as Paolo Tullio used to say, is a meat sauce with a little tomato, not the other way round), you are safe with a Montepulciano d’Abruzzo or a Pinot Nero from Alto Adige.

Frog’s Leap Estate Grown Cabernet Sauvignon 2017, €65, whelehanswines.ie
Throwing caution to the wind, I am going to suggest an extravagant bottle, because it’s summer and the world seems to be going to hell in a handcart. So, why not a little decadence with this recent arrival at Whelehan’s outstanding wine merchants in the old Silver Tassie? It may be from the Napa Valley, but this classic red is much more Bordeaux grand cru
classé than New World, and thus, surprising as it may seem, a bargain at the
price. Impeccable balance, restraint, elegance, and ready to drink.