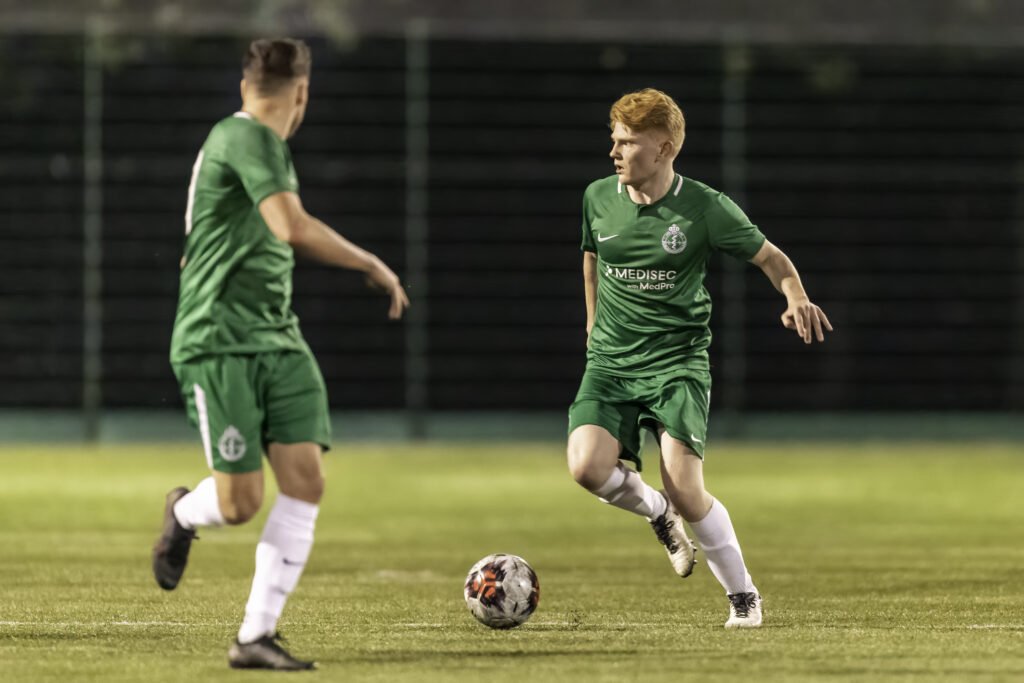 A bright start to the season for the Dublin Hospitals FC (DHFC) has dimmed somewhat with two successive draws in the Leinster Senior League. Under the Friday night lights in a balmy< Crumlin, DHFC laboured to a 1-1 draw with Finglas United (FU) following a second-half exchange of set pieces. In truth, three injuries DHFCcould ill afford took their toll on the medics in the second-half as they had goalkeeper and man of the match Paule Schutze to thank for two superb saves that meant they escaped with a draw

The first of the injury setbacks occurred in the warm-up, when defensive stalwart Kieran Keane pulled up with a hamstring strain. With a last-minute reshuffle required, DHFC were grateful for the versatility of ageless GP Andy Delany who reverted tocentre-back. Despite the late hiccup, the home side actually started the more brightly of the two. From the opening kick-off, right-sided attacker Rory Durand began tormenting the Finglas left-back. On two occasions in the opening 20 minutes, the trainee Cardiologist caused problems in the away defence after being released by right-back and medical SHO Robert Trueick. On the first occasion, Durand shot narrowly over, before going one better moments later and striking the crossbar with a piledriver.

Durand was also at the heart of Dublin Hospitals’ best chance to that point on the half-hour. Latching onto a ball down the line, he didn’t miss a beat to send a high cross from the byline. It was met by left winger Ger Cheevers, whose
powerful header was miraculously saved point blank by Finglas goalkeeper, who knew little about it. From
there, Finglas played their way back into the game and created two or three half chances before half-time, easily dealt with by Schutze and Dublin Hospitals’ back four.

Unfortunately, half-time brought no respite for the medics as injuries to Delany and Radiologist Brian Gaffney, in midfield, became apparent and required both to be replaced. As a result, the full complement of the home side’s replacements was used before play resumed. With DHFC having been the slightly better of the two teams in the opening 45, the change of personnel seemed to even things up and Finglas brightened as the sun set. Without Gaffney’s incisive passing, DHFC became more reliant on long passes to striker Cillian Grant in the second-half. Despite Finglas’ superiority, this strategy paid dividends on the hour. A direct ball to Grant was well-controlled by the forward and neatly played out to substitute medical SHO Fionn Nally on the left wing, who cut inside his marker into the box. Nally’s quick feet proved too much for the Finglas right-back who lunged in and Nally, recently

returned from Australia, went ‘down under’ the challenge. The referee hesitated slightly before pointing to the spot to the audible disagreement of the away team as FU made their feelings known. With the resulting penalty, magician John Cosgrove waved his wand of a left foot and the ball magically appeared in the top left corner. 1-0 to the doctors. The goal only increased the pressure from Finglas who created two great chances in the subsequent 10 minutes. Their pacy number 11 latched onto a flicked through-ball only to drag it marginally wide. Minutes later, another slide-rule pass released the away striker only to be denied by a fabulous low block from the DHFC stopper Schutze. The reprieve was short-lived, however. On 70 mins, a slightly mistimed challenge on the edge of the area gave Finglas a well-placed free-kick from 25 yards out to the right of centre.

They duly took the opportunity to curl a pearl of an effort into the bottom right-hand corner. One each. As the half wore on, the fresh legs provided by Finglas’ replacements became apparent as the busy call shift put in by the Hospitals’ midfielders throughout the game began to take its toll. As legs cramped and reactions slowed, Finglas began exerting more and more pressure, but the two Johns at centre half, Cosgrove and O’Grady, cleanly dealt with anything in front of them or behind. Ultimately, the final whistle was greeted with relief for DHFC, not least the SHO on
the pitch with a looming overnight oncall.

With the team having gone through an evolution this off-season, including a name change and newlook crest, opening the campaign with two wins was as promising as could be hoped. This result and last week’s stalemate have tempered expectations slightly

But the beauty of the LSL is there is always a chance to put things right the following week (or whenever the
authorities deign to schedule the next fixture). Dundrum away will offer a stern test.