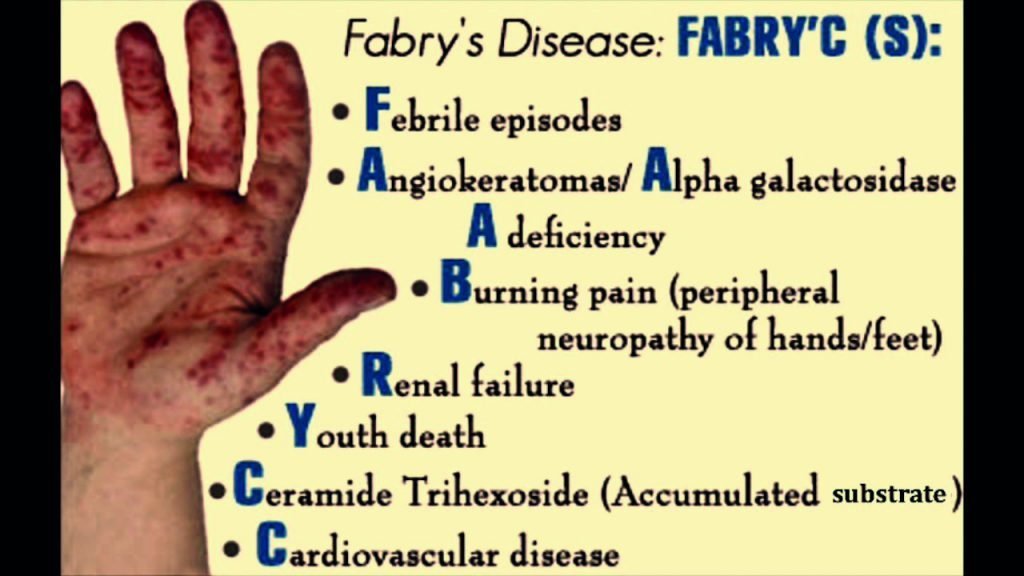 Fabry disease (FD) is an inherited disorder of metabolism, caused by deficiency of an enzyme, α-galactosidase A (AGAL). As a consequence, there is accumulation of incompletely-degraded material in major target organs, such as the kidneys, heart and cerebrovascular system.

Although major complications such as kidney failure, cardiomyopathy and stroke do not manifest until adulthood, FD is heralded by pains in the hands and feet (acroparesthesias), diminished or absent sweating and abdominal discomfort evident in childhood.

Angiokeratomas (small, dark, red-to-purple raised spots on the skin, which can be isolated or occur in clusters) are also often noted in a bathing-trunk distribution, ie, trunk and groin.

Corneal opacities are also often present, although these do not interfere with vision and can only be demonstrable by slit lamp examination. Patients may develop tinnitus and hearing loss, which may necessitate the use of hearing aids in adulthood.

Males and females can develop complications related to FD, although disease expression can be more variable in females and occur at a later age, when compared with affected males. FD is transmitted as an X-linked trait, and in the majority of cases is passed on by a carrier mother to sons and daughters. Thus, a thorough family history can provide an invaluable clue to diagnosis in patients presenting with suggestive signs and symptoms. Infrequently, FD can arise de novo or as a spontaneous mutation, in which case there may be no affected individuals in earlier generations. However, descendants of an affected individual can pass the trait on to future generations. Although all daughters born to an affected male inherit the trait and can subsequently pass on the trait, none of his sons would be affected. All diagnosed patients should be referred for appropriate genetic counselling.

At the time of diagnosis, it is essential to establish overall disease burden. Recommended assessments include hearing tests and an ophthalmological exam; cardiac evaluations: EKG, Holter monitoring and electrocardiogram; renal function tests; and checking for proteinuria.

An MRI of the brain may be indicated in patients with neurologic symptoms; often, signal abnormality or changes may be seen and mistaken for white-matter disease or multiple sclerosis. A characteristic finding on brain MRI is dolichoectasia (ie, elongation and tortuosity of the basilar artery).

We recommend diagnosed patients be referred to the Adult Metabolic Service at the Mater Hospital. Working in tandem with local/regional providers, an interdisciplinary care plan can be developed.

There has been no systematic evaluation of the incidence of FD in Ireland. However, we recently examined the cases known to us and present some of this information as an illustration of the local experience. It should be pointed out that ascertainment, even for the families known to us, may not have captured all affected individuals, eg, in some cases relatives have not expressed a desire to be tested, or may have left the country prior to diagnosis of the index case. As our unit only manages adult patients, only data for this population was reviewed.

Altogether, records on 51 individuals were examined. These individuals, both males and females, ranging in age from 18-to-80 years, were members of 22 families. The majority were of Irish ancestry, except for three families who migrated to Ireland within the last 10 years.

Interestingly, the N215S mutation, which can be associated with cardiac-predominant features (left ventricular hypertrophy), was found to be the most common gene defect. In these cases, renal failure (which often sets in between the ages of 35 and 45 years among classically-affected males) does not develop or occurs at a much later age.

However, the type and severity of cardiac complications encountered in these two groups of patients is similar. Indeed, cardiac-related complications represent the most common cause of premature demise in this population, given renal failure can be addressed by dialysis or kidney transplantation.

Of the 51 patients, two males from different families have undergone kidney transplantation and seven have advanced kidney disease (CKD stage 3 or 4), including four females.

Of note, lymphoedema, related to the accumulation of glycolipids in the lymph vessels rather than to kidney or heart disease, has also been noted in several adult patients, with or without renal insufficiency or cardiac failure.

In the last two years, several families have come to our attention because a relative had been diagnosed with cardiomyopathy. In these cases, FD was not considered as the cause, but disclosed as the underlying diagnosis following genetic panel testing for hypertrophic cardiomyopathy (HCM).

In one European study of 392 adults (278 men) followed for HCM, screening for FD revealed four affected men, but no women; a yield of 1.4 per cent (4/278) (FOCUS study, Hagège AA, et al; Heart 97(2):131, 2011). Family screening identified eight additional cases. Based on these findings and our experience, we anticipate additional families will come to medical attention in the foreseeable future.

Patients with FD are also at risk for cerebrovascular events, transient ischaemia attack and strokes. The majority of these occur in patients with arrhythmias and/or hypertension.

FD is treatable by enzyme replacement, which involves the regular fortnightly infusion of a recombinant enzyme formulation. Treatment is well tolerated, although some patients may develop an allergic or infusion reaction to the drug, which may be managed by premedication and a slower rate of administration. The majority of patients on infusion therapy receive treatment at home, facilitated by visits from a nurse trained in the administration of the enzyme.

Disease severity at the time treatment is initiated appears to influence outcome. For instance, studies have shown some patients with significant proteinuria may go on to develop end-stage kidney disease. Furthermore, patients with cardiomyopathy may experience arrhythmias or heart block, in some cases necessitating the placement of a pacemaker/defibrillator. Those with myocardial fibrosis tend to be the group at the highest risk of cardiac-related complications. Thus, staging of the disease process at the time of diagnosis is essential.

Adjunctive therapies, such as the provision of ACE inhibitors for those with proteinuria, the use of lipid-lowering drugs and aspirin or blood thinners to reduce to incidence of stroke, are believed to reduce the rate of disease complications when given to those on enzyme therapy.

Currently, there are 28 patients known to us on enzyme therapy, for a treated group average duration of nine years. A subset of these individuals started treatment before the age of 18 years. Four patients have been deemed suitable for therapy and are awaiting approval. One individual has refused treatment.

More recently, an oral pharmacologic chaperone (PC) has become available as an option (awaiting approval for reimbursement in Ireland). The PC is a small-molecule agent that can enhance the residual enzyme activity of select mutant enzymes, achieved by stabilising the defective enzyme and restoring its function in the lysosome, thereby reducing the amount of tissue deposits.

In summary, all diagnosed patients should be reviewed at least once a year, or more often when new symptoms arise. Monitoring enables assessment of disease progression and response to therapy, if any.