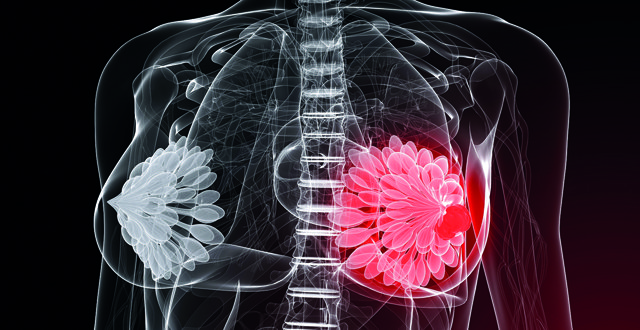 A 34-year-old mother of a four-year-old son presented to her GP with a left breast lump of three months’ duration. She had no significant past medical or surgical histories and no family history of breast or ovarian cancer. There was a mass in the upper outer quadrant of the left breast with no palpable lymphadenopathy.

Mammography and breast ultrasound revealed a malignant-appearing left breast lesion with no axillary lymphadenopathy. Biopsy of the breast lesion revealed a grade III invasive ductal carcinoma, which was oestrogen- and progesterone receptor-positive and HER2-negative. Lymphovascular invasion was present.

The patient proceeded to breast-conserving surgery, which was uneventful. Histopathology revealed a tumour with axillary node-positive disease. The patient proceeded to have adjuvant systemic chemotherapy. Prior to starting this therapy, she began subcutaneous triptorelin injections monthly in an effort to preserve her ovarian function.

Young age is an independent predictor of an adverse outcome, and the majority of young patients with breast cancer receive systemic treatment with chemotherapy, hormonal therapy, or both.

These patients are at significant risk of transient or permanent amenorrhoea, and for those women who continue to menstruate or who recover their cycles, there is an additional long-term risk of premature ovarian failure. One estimate showed that each month of chemotherapy translates into 1.5 years of lost reproductive life.

In women younger than 35 years, the long-term (three years after diagnosis) incidence of amenorrhoea is similar to that of women who do not receive chemotherapy (nearly 10 per cent), but it increases to 50 per cent in women aged 35-to-40 years and to 85 per cent in women older than 40 years.

The PROMISE-GIM6 (Prevention of Menopause Induced by Chemotherapy) study was conducted at 16 sites in Italy and enrolled 281 patients between October 2003 and January 2008.

The incidence rate of pregnancy was 0.9 per 100 person-years in the triptorelin arm vs 0.4 per 100 person-years in the chemotherapy-alone arm, and the five-year cumulative incidence of pregnancy was 2.9 per cent in the triptorelin arm and 1.6 per cent in the chemotherapy-alone arm, respectively, yielding a hazard ratio of 2.56 (P = .142).

A total of 257 premenopausal patients to be treated with adjuvant combination systemic chemotherapy were randomised to receive standard cyclophosphamide-containing chemotherapy with or without monthly goserelin (GN) 3.6mg SQ, starting one week prior to the first chemotherapy dose. The primary endpoint was two-year premature ovarian failure (POF) rate. Other endpoints included pregnancy rate and survival.

Premature menopause has significant consequences, including vasomotor symptoms, sexual dysfunction and infertility. This last effect is a major concern for young women with breast cancer

The results were statistically significant and the authors concluded that LHRH analog administration with chemotherapy was associated with less POF and more pregnancies.

These two studies present randomised data to support the use of ovarian suppression to protect fertility in young women undergoing chemotherapy for breast cancer. There are small numbers in both trials, however, and uncertainty remains about the long-term efficacy and safety of this approach.

This treatment is a reasonable consideration, however, in a young woman who is about to undergo cytotoxic treatment and does not wish to proceed with other more established methods of fertility preservation, such as embryo preservation.

Tamoxifen has been the standard adjuvant hormonal therapy for premenopausal women for more than two decades. It has been unclear if more intensive hormonal manipulation, such as the addition of ovarian suppression, would result in better outcomes for younger women who maintained ovarian function during adjuvant hormonal therapy with tamoxifen. This question has been addressed in the recently-reported TEXT and SOFT trials. These studies suggest an improvement in outcomes with ovarian suppression in combination with an aromatase inhibitor compared to tamoxifen alone or to tamoxifen with ovarian suppression in high-risk subgroups.

Recurrences in high-risk patients who were less than 35 years of age, had node-positive disease, large tumours of high grade, and who received chemotherapy and remained premenopausal, were significantly reduced by the use of the aromatase inhibitor exemestane plus ovarian suppression in comparison to tamoxifen plus ovarian suppression and to tamoxifen alone (with absolute improvements of 7.7, 4.5 and 2.0 percentage points at five years, respectively).

Such combined therapy should be considered in these high-risk premenopausal subgroups that retain ovarian function after chemotherapy. The longer-term effects of more comprehensive hormonal suppression should be carefully considered and monitored in patients undergoing this therapy.

These recently-reported studies have practice-changing results, as they illustrate that the addition of ovarian suppression during chemotherapy in premenopausal early breast cancer patients may be associated with less premature ovarian failure and more pregnancies in patients with both hormone receptor-positive and hormone receptor -negative breast cancer.