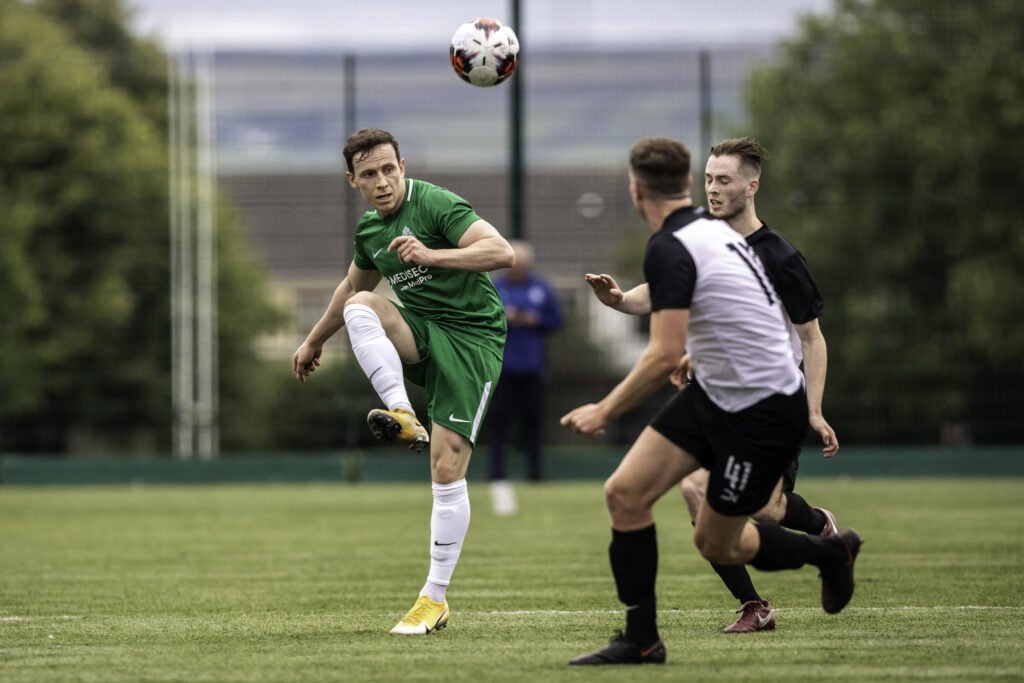 Pre-match preparations were interrupted by an earlier than usual kick-off time of 7pm being the excuse for a few
late-arriving doctors. It was no surprise then that DHFC was slow out of the blocks. Rosemount, lining out with three at
the back and wingbacks, were on top early, finding joy with direct balls into the centre forward’s feet who was able to
hold onto the ball and bring their tricky number 10 into play. Rosemount had a number of opportunities from set
pieces, and it wasn’t long before they made one count. An in-swinging corner was not dealt with by the Hospitals’ defence and it fell kindly to the Rosemount centre-half who had come up for the corner. Presented with a complete sitter he made no mistake. 1-0 Rosemount.

Dublin Hospitals were still in warm-up mode at the 15-minute mark when they began to battle back into the
game. This was not a great watch for the neutral, both teams had made an excellent start to the season and there was a tension in the air before the game. When the doctors finally woke from their slumber, this game turned into a battle, with very few chances. There were lots of heavy tackles leading to free kicks and disruptions to the flow of play and very few sustained periods of possession.

On the 30-minute mark, DHFC scored the equaliser. After Mat Berkley won the ball in midfield, he released John
Cosgrove who was deputising at left-back for the evening.
Cosgrove drove into the opposition’s half and found himself in space. What followed was truly spectacular. With the
Rosemount goalkeeper barely 10 yards off his line, Cosgrove
drove a dipping left-footed effort into the top right-hand corner of the net. The only place outside the goalkeeper’s reach.
That spark of brilliance, reminiscent of a certain Brazilian effort against England in the 2002 World Cup quarter final,
stood out in a game where both teams essentially cancelled each other out. The first-half ended with score at 1-1.
The teams re-entered the fray after the half-time break, with the DHFC looking somewhat livelier than they did in
the opening minutes of the first-half. A rare period of sustained pressure led to a number of half chances for Dublin
Hospitals, but the physical Rosemount defence remained resolute and didn’t allow much space for the typically boisterous Cillian Grant.

Dublin Hospitals have reaped the rewards of representing all hospitals in the county and a broader selection of players
to attract to the club. This was most obvious when looking at the strength in depth and the substitutes available. Nally,
Wrynn, Durand, and Gildea all potential matchwinners on their day and all confined to the substitutes bench at the
start of this game. Fionn Nally was the first to make an entrance. The skilful winger has recently returned from Australia to much excitement in the Dublin Hospitals camp. He immediately made an impact, injecting energy to the attack and causing havoc with his direct running and exquisite close control.

Despite the addition of Eddie Wrynn and later David Gildea in the attacking positions, Dublin Hospitals could not break the deadlock as the game continued with a midfield battle, featuring multiple 50-50 challenges and loose balls.
In the closing stages of the game, DHFC had one final chance to take the three points. After some intricate play
involving Nally and Cosgrove on the left-flank, Aidan McGrath had a rare opportunity to get in behind the Rosemount defensive line; however, the goalkeeper closed his angles very well and forced the shot wide.

The game ended in a 1-1 stalemate, with both sides perhaps happy not to lose. Maybe this game came a little too
early in the season for these teams and it will be an intriguing reverse fixture when they meet again at Rosemount.

For Dublin Hospitals FC the next game sees them take on Finglas United at home. Finglas are a team in form at present
and it will be another important game for the team who have seven points from the first three games of this LSL season. The doctors have yet to be defeated in a competitive game since evolving from St Vincent’s FC to Dublin Hospitals FC and will hope to continue their good run of form.