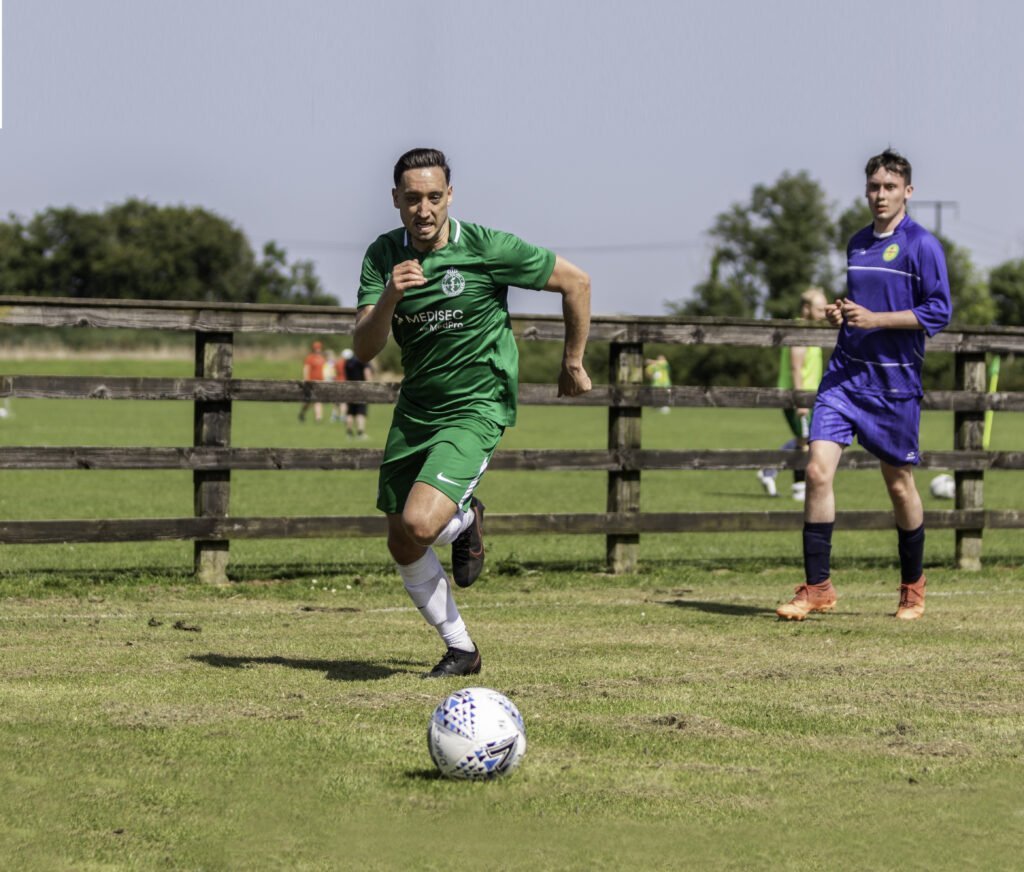 While much of the country enjoyed a relaxing Saturday afternoon in the unprecedented heat, Dublin Hospitals FC travelled to Dunboyne in scorching 29-degree temperatures. A positive pre-season and a winning start in their opening game against Dundrum FC meant the mood for the boys in green was optimistic. However, a number of injuries had limited the number of players available to play. Despite this, a quick review of the team sheet and substitutes bench highlighted the strength at the doctors’ disposal. This is a byproduct of the tireless work that has gone on behind the scenes in the restructuring of the club over the past year. The rebranding of St Vincent’s Hospital FC to Dublin Hospitals FC has seen a wave of new talent arrive at the club from throughout Dublin. Even so, on one of the hottest days of the year, determination and perseverance would be key to leaving Dunboyne with a result.

Club captain, and Rheumatologist in Tallaght Hospital, Colm Kirby was getting flashbacks to
heat at the Medical World Cup in Cancun, Mexico, two years ago and wisely suggested to the referee to implement a water break system half-way through the first and second half of the game. All players involved were very grateful.

The game started with Dunboyne dominating the early exchanges. A cross into Dublin Hospitals box was nicely controlled by the Dunboyne centre forward and an excellent volley into the top corner was miraculously saved by Dublin Hospitals goalkeeper, Paul Schütze. Paul was busy again shortly after as the Dunboyne number 9 was through on goal, but Paul was extremely quick off his line and stifled the chance. Another shot, this time from the Dunboyne number 10, was heading the left side of Paul’s net, but another splendid save kept the game at 0-0. The heroics of Schütze have led many to suggest he is already a shoe-in for the goalkeeping position on the Major 1B team of the year 2021/2022.

Dunboyne continued the pressure in the opening 15 minutes of the game, sending a number of dangerous crosses into the box from corners. Dublin Hospitals centre back pairing of Colm Kirby and John O’Grady dominated the aerial exchanges and cleared their lines effectively. It was a moment of good fortune that eventually broke the deadlock for Dunboyne. A brilliant sliding tackle from David Kennedy, senior physiotherapist at St James’s Hospital kindly rebounded off a Dunboyne midfielder into the path of his left back teammate who slotted nicely into the bottom left corner of the Dublin Hospitals net. 1-0 Dunboyne.

The heat was starting to take its toll on some players with many pointing out an uncanny resemblance between Dublin Hospitals winger Edward Wrynn and a lost soul trekking across the Death Valley desert in North America. However, the midfield combination of Brian Gaffney, Radiology Registrar at St Vincent’s Hospital, John Cosgrove and Ger Cheevers defied logic with their endless energy and running as Dublin Hospitals grew into the game and started to dominate proceedings from the 20-minute mark onwards.

a lost soul trekking across the Death Valley desert in North America. However, the midfield combination of Brian Gaffney, Radiology Registrar at St Vincent’s Hospital, John Cosgrove and Ger Cheevers defied logic with their endless energy and running as Dublin Hospitals grew into the game and started to dominate proceedings from the 20-minute mark onwards.

A superb cross from John Cosgrove was met with an equally superb header from Cian Ward, Mater Hospital doctor. A fine stop from the Dunboyne goalkeeper kept the score at 1-0. More fine work down the left hand side of the pitch from Cian Ward led to a goalmouth scramble in the Dunboyne box as Brian Gaffney was unlucky to have his shot cleared off the line. Brian Gaffney was involved again in another passage of play with a fine through ball to the skillful Dublin Hospitals centre forward, Cillian Grant. Cillian’s delicate touch, turn, and volley was again wonderfully saved by the Dunboyne goalkeeper. The pressure finally told at the very end of the first-half as Ray Winters produced an attacker’s dream cross. Ger Cheevers glancing header into the bottom corner of the Dunboyne net gave the goalkeeper no chance as the teams went into the half-time break at 1-1.

After scrambling for shade behind the sideline barrier during the course of the half-time team talk, Dublin Hospitals started the second-half as they had finished the first. Cillian Grant was a constant thorn in the side of the Dunboyne defence with his continuous movement and beautiful hold-up play. He went agonisingly close with a lovely header to the bottom right of the goal, only to be denied by the post. Despite the change of momentum in favour of Dublin Hospitals FC, Dunboyne always carried a threat going forward. The Dunboyne left winger was their most dangerous player and he rattled the crossbar with a stunning strike from well outside the box. The crafty winger sent a low cross flying across the Dublin Hospitals box with the Dunboyne number 7 surely feeling he should have done better as he sent the ball flying well over the crossbar.

The introduction of Tallaght Senior House Officer Robbie Trueick and Beaumont Senior House Officer Fionn Nally brought some much needed fresh legs to the picture. Indeed, Fionn Nally was heavily involved in Dublin Hospitals second goal as his initial attack down the left hand side of the pitch led to the
ball finding its way to the feet of Cian Ward, who calmly provided a perfectly weighted pass for Ger Cheevers, whose exquisite first time finish gave the team a deserved lead.

The gruelling match was put to bed with 10 minutes left to play. Quick thinking from Brian Gaffney from a free kick on the edge of the Dunboyne box had the defence scrambling as standout performer, Ger Cheevers, was through on goal again and made no mistake with the finish to complete a remarkable hat-trick. Ger is a new addition to the squad this season and is exactly what the team were crying out for. His only complaint at full-time was that he wasn’t offered
the match ball by Dunboyne: “I just thought it was bad form that they didn’t acknowledge what I did out on the pitch there today.”

Six points from the opening two games leaves the Dublin Hospitals team joint top of the table. This start is in stark contrast to the struggles faced by St Vincent’s in the previous two seasons, where they have been rooted to be bottom of the Major 1B Saturday league for the majority of both seasons, only narrowly avoiding relegation with a sudden string of results at the very end of the year. Although there is good reason for optimism, the club are fully aware that tougher tests lie ahead. Their next match is against Rosemount Mulvey, whose impressive goal tally of 10 in their opening two games, along with consecutive clean sheets, will be a much sterner test for this group of players.

PS. Dublin Hospitals FC would like to thank our wonderful sponsors Medisec Ireland, who have been integral to the redevelopment of our club.
Go online to www.dublinhospitalsfc.com for all the latest DHFC news, records, results and other features. See also information about the Premier League Survivor 21/22.