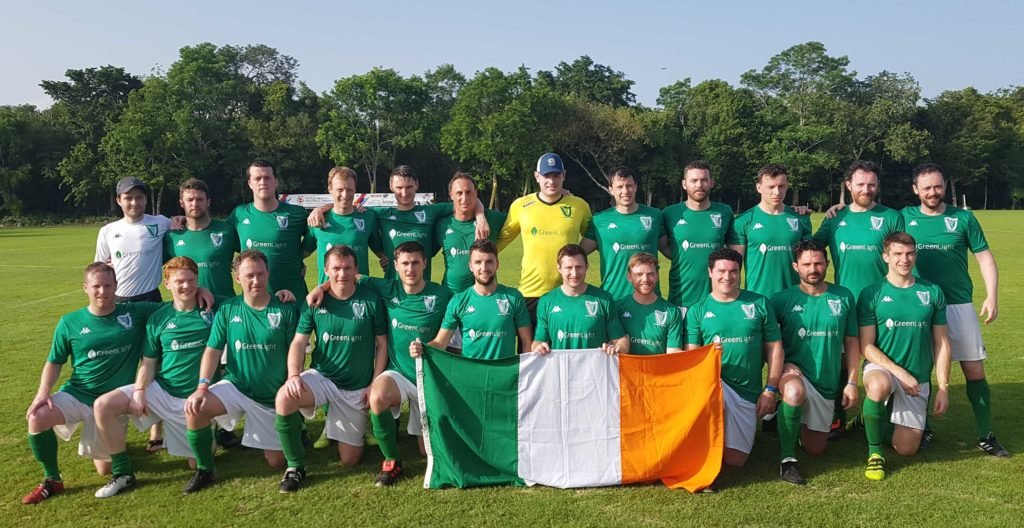 It was ‘a great week for the Irish’, with two teams in green reaching the quarter-finals of the  World Medical Football Championship in Mexico

Not since the glory days of Italia 90 has an Irish football team made the last eight of a major tournament, but — allowing for several major differences — the Irish medical football team managed it again at the 25th World Medical Football Championship in Cancun, Mexico.

Our valiant physicians escaped from a ‘group of death’ containing heavyweights Spain, Germany and the US and faced the mighty Argentina in the quarter-finals. But that only begins to tell an extraordinary tale of extreme weather, injury time agony and the unlikeliest of reversals of fortune.

To go back to the start for those not up to speed, the doctors’ World Cup features teams from 20 countries around the world. The games are 11-a-side and follow a typical tournament format. A unique rule demands that two over-35 year-old players and two over-40s are on the pitch at all times. All players must be doctors and over 25. There is also a separate Masters seven-a-side event for players aged over 45.

This year’s event took place in and around Cancun in Mexico. The matches all took place in — of all places — converted polo grounds quite literally in the middle of the jungle. Matches took place at 8am and 10.30am in a bid to avoid the worst of the sun’s attention, but this mattered little to the pale and freckly Irish squad. Our Fitzpatrick type I skin didn’t stand a chance. Special thanks to Bioderma for supplying essential sunblock for the whole team!

Our team’s eternal loyalty to our HSE paymasters meant that many of the players only flew in at the last minute on Saturday night, just in time to discover that our opening match against the US was scheduled for 8am local time the next morning. A few hours’ sleep and into the unknown.

The match itself kicked-off in the most torrential rain you can possibly imagine. It’s difficult to describe how heavy it was. Any other sport in any other country would have been called off — not football in Mexico, apparently. Words such as ‘biblical’, ‘torrential’ and ‘deluge’ are insufficient. There was more water than air. Anyway, the playing conditions suffered, as you’d imagine. Football became a cartoonish ‘splashathon’ where the ball refused to follow tradition and progress along the ground to any degree. Neither team was able to gain a foothold — on the ball, on the ground, or on reason.

Ophthalmology trainee Dave Gildea nodded in the opener to send us on our way. However, we conceded an excellent direct free-kick in the second half and were unable to find a way through. A scrappy point from a scrappy game and an inauspicious start, with the giants of Spain and Germany ahead.

With the busy lives of doctors the world over making an event like this exceptionally challenging to co-ordinate, the whole tournament is squeezed into a week. So we play six matches in seven days. In the jungle. After our adventures in aqua-football, the sun took hold. All of our remaining games were played in searing heat of 35 degrees and 80 per cent humidity. It was oppressive, to say the least. Several players highlighted that they had never felt anything like it. Regardless, the Irish players gave it everything, losing kilos in sweat during every game.

Next up was Spain. They were a quality outfit, with excellent control and passing skills pulling the Irish team this way and that. It was a thrilling encounter, with Ireland displaying professional levels of discipline and organisation throughout the match. Spain took the lead with an exceptionally well-worked team goal, before GP trainee Cillian Keogh equalised from the penalty spot. The same player then volleyed in a loose ball to give Ireland a lead that we held until late in the game. The heat taking its toll both physically and mentally, Spain snatched two soft goals with only minutes to go, seemingly ending our chances of progression.

But strange things were afoot in Cancun. It transpires Spain had fielded a player who had been sent off the previous day. As such, they forfeited the match and Ireland were awarded a 3-0 victory by default. From agony to ecstasy, we were back in the hunt. But we still needed to secure a result against the powerhouse that is Germany.

Another match, another scorching day. Everything on the line. Again, Ireland produced the goods when it mattered. Hassling Germany into mistake after mistake and playing the better football throughout, Ireland battled to a 1-1 draw, with surgeon Gav Kane nodding in the crucial goal.

With Spain assured of top spot, Ireland were second in the group. A nervous wait ensued as several results had to go our way to seal our place in the quarters. All the pieces fell into place and despite some last-minute chicanery objecting to our default victory, Ireland grabbed the last spot in the final eight, facing top seeds Argentina.

The medical Albiceleste did not disappoint. Superb on the ball, organised and inventive in their approach play and solid at the back, Ireland had their work cut out for them. For whatever reason, we seemed edgy from the outset and it cost us — Argentina scored a penalty early on and then added a soft second goal inside the first 20 minutes.

To be blunt, we didn’t look like getting a result for the bulk of the match, but coach Alan Burns threw caution to the wind in the last quarter, effectively throwing four up front and going for it. Added to this, St Vincent’s intern Fionn Lynch entered the fray. Fionn had electrified everyone in the build-up to the tournament, only to suffer a serious foot injury two weeks before the event. We were fairly sure his foot was broken, but answering Ireland’s call, he bravely leapt into action and was instrumental in turning the game around, along with the physical presence and dangerous crosses of rheumatology SpR Colm Kirby.

It was Argentina’s turn to be nervous and Ireland were all over them. Anaesthesiologist Darren McMahon forced a penalty with his relentless attacking runs from left-back and it was coolly converted by Dave Gildea. Moments later, Fionn Lynch bravely challenged the keeper in the air, winning the header cleanly, leaving GP Ian Daly to tap into the unguarded net. A perfectly legitimate equaliser, struck-off for a perceived illegal challenge on the keeper. We kept battling, but Argentina soaked it up and scored a third goal on the breakaway in the dying moments to seal the win.

We were devastated. After everything going our way and the strength of our performances, we really believed we could and would go on and win it all. But it’s back to the drawing board for next year, which coincidentally is set to take place in Argentina.

On to the Masters team of over-45 players, led by Waterford respiratory consultant Mark Rogan. The team, despite having the bare minimum of seven players for much of the week, rocketed out of the blocks with a hard-fought win over tough nuts the Czech Republic and followed it up with convincing victories over Austria and Canada to top their group and advance to the last eight for the first time in their short history.

They also created another notable piece of history when Ballymun GP Deirdre Horneck became the first female player to score in the 25-year history of the championship. Female players are allowed to play in the Masters event (attempts to hold a female event have yet to take off) and Deirdre’s deft flick past the Austrian keeper was enough to seal her name in the record books.

The other side of this long-running event is the always-interesting concurrent sports medicine conference. Ireland has a strong history of excelling in this arena — GPs Peter Kelly and Nathan Wall have scooped awards for presentations in previous editions. This time, rheumatology SpRs Colm Kirby and Kieran Murray, GP Connor Gallagher and Mark Rogan took to the stage and did Ireland proud.

So both teams made the knockout stages — not to be sniffed at. But we want more and believe that we can do more. We’ll be back and will once again do Ireland proud. A moment to express sincere thanks to our sponsors who made the long trip possible, especially title sponsors Greenlight Medicines, Ireland’s leading researchers into cannabinoid medications, Mason Hayes & Curran lawyers, GP Buddy and Bioderma, and extra thanks to our long-standing supporters Medisec, the Mater Private hospital and Direct Medical.

Further thanks and congratulations to all the players for their heroic efforts in extremely un-Irish conditions and especially to coach Alan Burns and physio Ben Melvin, who contributed huge efforts for the team throughout the tournament.