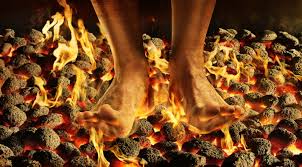 irewalking International (www.firewalkhq.com ) is “focused on the global development of people and we do this through a variety of activities that serve as metaphors for learning”.

Apart from fire-walking, the company offers other “metaphors for learning” — glass-walking, cliff-jumping, brick-breaking — further enhancing “the global development of people”.

The United Nations Food and Agriculture Organisation estimates that 795 million of the world’s population were chronically undernourished in 2014-2016. In the context of “global development”, millions of starving individuals might consider “metaphors for learning” such as glass-walking less important than, say, finding out how to get clean water. Nonetheless, Firewalking International’s website shouldn’t be condemned for favouring a bit of post-modern prose, and its claim that in the last three years 3,000 fire-walkers have raised £375,000 is impressive.

But why donate to charity because others walk on fire or jump off cliffs? What does it reveal about us if we only shell out cash to charities when we’re entertained? Perhaps Oliver Herford was right when he said that charity is the sterilised milk of human kindness. Is being moved by the plight of a particular individual or group an insufficient incentive to ignite a spark of generosity?

Philosopher Prof Peter Stringer contends that giving to charity is not a matter of generosity, but of duty. In his text Practical Ethics (1979), Stringer argues that those who can afford to should give a tenth of their income towards reducing absolute poverty: “By any reasonable ethical standards, this is the minimum we ought to do, and we do wrong if we do less.”

But doing more doesn’t mean we do right. For example, in the autumn of 2010 — months after the earthquake in Haiti, which may have killed up to 316,000 — around 10,000 people died during a cholera outbreak that was traced to a United Nations peacekeeping camp; and in the London Review of Books (23 May, 2013), Pooja Bhatia, considering Farewell, Fred Voodoo: A Letter from Haiti (2013) by Amy Wilentz, cites opportunism “even among doctors”, with one seemingly boasting “about hacksaw amputations and vodka sterilisations”. Then there was Mother Teresa, whose institutions attracted large amounts of money but whose actions raised the suspicion that many things were too good for the poor. For example, in Mother Teresa’s care for the dying, in The Lancet (1994, 344: 807–808), Dr Robin Fox’s visit to Mother Teresa’s Home for the Dying, concludes: “Along with the neglect of diagnosis, the lack of good analgesia marks Mother Teresa’s approach as clearly separate from the hospice movement. I know which I prefer.” Yes, so do I.

Yet trying to act morally in a civilised society (never mind an uncivilised one) does not confer immunity from uncomfortable paradoxes, and the truth is that in the case of, for instance, foreign aid, while some are content to carp while dancing on the heads of moral pins — corruption, ‘charity begins at home’, etc — others are getting on with it.

Thus, in 2015 the Irish Government spent €647.51 million in Official Development Assistance. One of its beneficiaries was Malawi, where, according to Irish Aid’s 2015 Annual Report: “By the end of 2015, an estimated 382,000 households were using improved fuel-efficient cook stoves… as part of Irish Aid’s work in adapting to the effects of climate change.”

Malawi has the highest incidence of cervical cancer in the world and no national programmes for its prevention through immunisation or screening, contributing to the country’s high mortality from the disease. In another example of getting on with it, the University of Edinburgh’s Global Health Academy, funded by the Scottish Government International Development Fund for Malawi (www.ed.ac.uk/global-heal undertook a sustainable programme of cervical cancer screening. In its first two years, around 150,000 people in the project region were contacted either directly or through local radio broadcasts; 24 Malawian healthcare professionals were trained to provide cervical screening using visual inspection by acetic acid; and over 7,000 women had their first-ever cervical screen.

By December 2016, 17,000 women had been screened and 41 Malawian healthcare professionals trained. This project helps reassure those who have no lesions; identifies and gives appropriate care to those with cervical abnormalities; and ensures that those with cancer have their diagnosis explained and are offered surgery or palliative care where appropriate.

Writing in the International Journal of Cancer (2016, 139: 908−915), Campbell et al described their experience with the use of thermocoagulation as an alternative treatment modality in a ‘screen-and-treat’ programme of cervical screening in rural Malawi.

Here, they found, was a model that could be rolled-out to other facilities across the country and one which “proved feasible and acceptable… and could increase the number of women receiving timely treatment for precancerous lesions in low- and middle-income countries”.

Given these Irish and Scottish examples of good work in Malawi, the question is: Would Irish Aid or the University of Edinburgh’s Global Health Academy complain if they were to acquire extra funding as a result of fire-walking? If the answer is ‘no’, perhaps it’s time that I took my socks off… and got on with it.