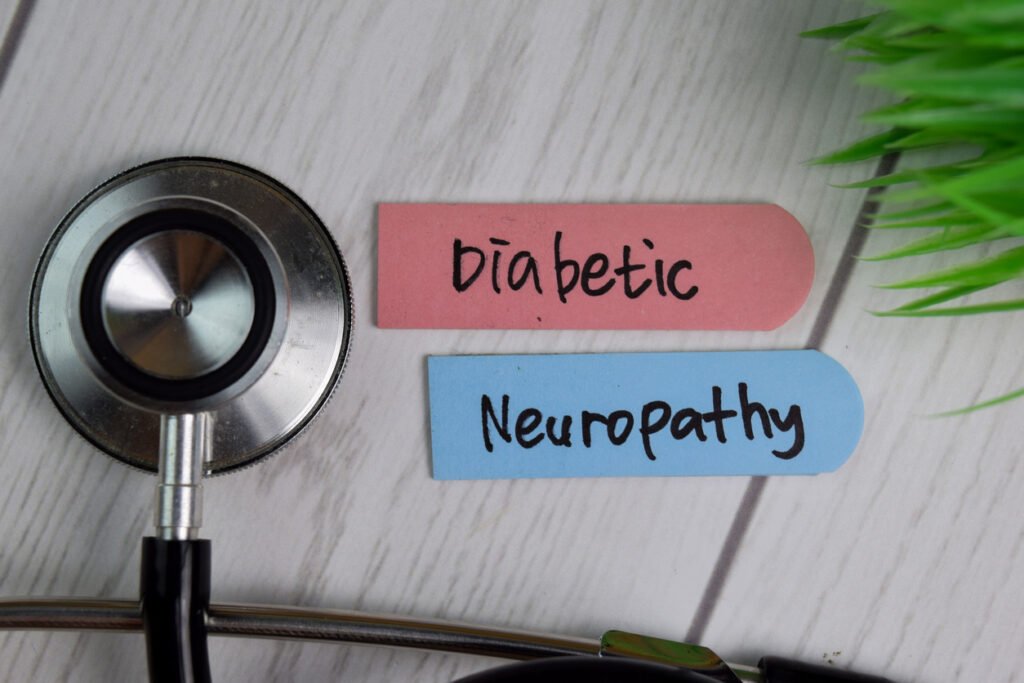 Diabetic neuropathy (DN) is the most common peripheral neuropathy globally. According to the International Diabetes Federation, 425 million people worldwide aged 20 years or over had diabetes in 2017. This is expected to increase
to 629 million by 2045.

Therefore, with the prevalence of diabetes in adults rising to 10.8 per cent in the US and 4.3 per cent in the UK, improving the management of peripheral neuropathy has never been more important.

In clinical practice painful diabetic neuropathy (PDN) represents a common, disabling and very often ignored issue, impacting on 50 per cent of people with diabetes at some point. Non-painful DN (NPDN) can pre-date PDN so it is important to try and identify early the small fibre changes early to avoid the complications and intervene to
avoid extension of neuronal damage.

This overview seeks to highlight how to identify PDN with new early assessment options and considers what the newest treatment options are.

PDN is regarded as a small fibre neuropathy (SFN). Diabetes is not the only cause of SFN and, despite extensive diagnostic evaluation, up to 50 per cent of individuals with SFN ultimately may be given a diagnosis of ‘idiopathic’. There are many other possible causes as outlined in Table 1. Attempts to subdivide causes have proven challenging and do not at present seem to offer any distinct therapeutic advantages.

Diabetes and pre-diabetes (including both impaired glucose tolerance and impaired fasting glucose) are frequently associated with pure SFN (15-23 per cent); however, concomitant large fibre involvement is seen more often. Nearly half of all subjects with idiopathic SFN have abnormal two-hour glucose tolerance tests or abnormal fasting glucose levels. The abnormal glucose testing may be seen despite normal glycosylated haemoglobin. Several studies have also established a link between pain in SFN and abnormal glucose metabolism. There is also a large overlap between prediabetes and metabolic syndrome.

Therapy is tailored toward identification and treatment of the underlying cause of the neuropathy, when possible, while simultaneously managing symptoms of pain.

The history and physical examination findings are still considered the gold standard against which all tests are compared when making a diagnosis of an SFN. There are two simple sub-divisions to consider: PDN and NPDN.

PDN represents a particular problem because it is associated with reduction in the quality-of-life and may limit rehabilitation. PDN can present with features suggestive of neuropathic and non-neuropathic pain. Patient might describe their pain as unpleasant pricking or sticking sensations. Interestingly, evoked types of pain, including allodynia
(painful sensations caused by non-painful stimuli) and hyperalgesia (increased pain response to otherwise painful stimuli), common in neuropathic pain are unusual in PDN.

There have been several studies trying to compare PDN and NPDN in order to identity risk factors. However, findings regarding older age, female sex, smoking status, and duration of diabetes are inconsistent features. It is common to find that symptoms start in the toes and spread up the limb. The classical pattern of ‘stocking-glove’-like distribution reflects neuronal dysfunction.

Generally, if a diabetic patient presents with a compelling history and an appropriate clinical exam for peripheral neuropathy, further testing to confirm the diagnosis may be unnecessary. However, in many cases, the diagnosis may be less clear and ancillary testing may provide additional guidance in the long-term management.

It is not uncommon to find a normal or near normal physical and neurologic examination in DN. The co-ordination, motor, and reflex examinations will be normal. Light touch, vibratory sensation, and proprioception also may be normal, resulting in diagnostic confusion in some situations.

Some patients may have decreased pinprick, decreased thermal sensation, or hyperalgesia in the affected region. There may be mildly decreased vibratory sensation in some individuals. Associated skin changes in affected areas may include dry, cracked, or shiny skin, with decreased moisture on the surface of these affected areas as well. Therefore, bedside assessment and diagnosis can prove quite difficult in many early cases.

Identification of PDN can be noted using simple assessments, such as the Neuropathic Pain Symptom Inventory, which will help differentiate various aspects of neuropathic pain, and may aid in selection of treatments. There are a number of simple neuropathic assessment tools available, such as the DN4, PainDetect or the LANS, which can help quickly identify the presence of neuropathic features.

Quantitative sensory testing (QST) is an extension of the physical examination that can provide a threshold for detection of thermal sensation, thermal pain, and vibratory sensation. QST has been used in a number of longitudinal studies and clinical trials of neuropathy. In the past it was seen as a research tool, but with newer technology and the ability to compare to large baseline databases performing reliable tests in a busy clinic will become an option. See case study on page 22 and typical report where abnormal function is reported (Figure 1).

There are some well-recognised limitations to QST; abnormalities in either the central or peripheral nervous system can result in the same deficit. In addition, QST requires conscious integration from the patient, and in conditions of cognitive impairment (due to disease or medication), the reliability of the test results are in question. Finally, QST
is unable to distinguish between feigned and true loss of sensation.

There are few trials utilising QST in the study of isolated SFNs; most trials include patients with large fibre involvement as well. Heat or heat-pain detection thresholds are considered the most useful and specific for evaluation of an SFN. Cold and cold-pain detection are transmitted through lightly myelinated Aδ fibres, while vibration detection thresholds are detected through large myelinated Aα and Aβ sensory fibres.

Skin biopsy is an accepted technique to investigate the structural integrity of small nerve fibres. A standard 3mm dermatologic punch biopsy can be taken from any location on the body, but typically is performed on sites of interest in evaluation of a distal SFN (the lateral distal leg, the lateral distal thigh, and the lateral proximal thigh to look for a length-dependent pattern).

In early or mild cases of SFN, morphologic abnormalities of nerve fibres may aid in diagnosis if nerve fibre density is not reduced. Unfortunately, there are no data on the utility of skin biopsy to diagnose the aetiology of the SFN let alone PDN. Given the invasive nature of this test it is unlikely to become standard practise.

Electromyography and nerve-conduction studies are well-established neurophysiologic techniques used to assess the integrity of larger myelinated sensory and motor fibres. These studies are often normal in pure SFN. Nerve conduction studies usually include examination of distal latency, conduction velocity, and sometimes F-wave latency of motor nerves (ulnar, peroneal, and tibial) and sensory nerves (ulnar, radial, and sural). There is no formal consensus for the definition of PDN by nerve conduction studies. This investigation is invasive and relatively painful for the individual who may be suffering allodynia and hypersensitivity Repeating the test to monitor progression or improvement of the condition is not offered.

Depending on each case it may be necessary to use advanced laboratory investigations, perform a lumbar puncture and cerebral spinal fluid analysis, or to suggest genetic testing, especially in unexplained family history.

Treatment of any underlying causative aetiology of an SFN is likely to be the most effective treatment of pain. However, in many cases of PDN resistence to therapy is a common feature. There is very limited evidence for specific medications in the treatment of pain from SFN, including PDN, so physicians often rely on their experience or defer treatment.

Most clinical studies have examined drugs in the treatment of many neuropathic pain syndromes (such as postherpetic neuralgia and PDN). In some trials, the spectrum of neuropathic pain can be broad and include diagnoses such as central neuropathic pain, radiculopathy, or carpal tunnel syndrome. These disorders may respond to treatment differently than pain from SFN. This is a challenge when developing treatment recommendations for small nerve fibre pain, because comparative effectiveness across different pain states is not known.

In addition, head-to-head trials of medications and long-term outcome data for SFNs are lacking. When possible, disease-specific treatment guidelines should be selected for management of pain in SFN (eg, diabetes, HIV, or chemotherapy). In patients with idiopathic SFN, pain physicians must select treatments based on evidence of safety, efficacy in other neuropathic conditions, tolerability, drug interactions, comorbid conditions, and cost.

Table 2 outlines some options that can be considered on a case by case basis.

b) Neuromodulation management in PDN

The concept of using invasive neuromodulation (spinal cord stimulation, (SCS)) with an implanted stimulator device to offer longer-term relief to refractory patients with poorly controlled pain is well-established. Given the prevalence of diabetic neuropathy, bioelectric modulation has the potential to be one of the commonest indications for such treatments.

While the neurophysiology of chronic stimulation and how it achieves analgesia is poorly understood, the field continues to expand. Multiple SCS programming options are now available including tonic (t-SCS), burst (b-SCS), high frequency (HF10), and dorsal root ganglion stimulation (DRGS).

In recent months the largest prospective RCT of SCS treatment was conducted for PDN (Nevro’s SENZA-PDN study,
JAMA Neurology 2021). This compared 10kHz SCS plus conventional medical management (CMM) to CMM alone in
216 patients at 18 centres in the US with a 24-month follow up.

Within six-month data has shown sustained effectiveness of 10kHz SCS versus CMM and demonstrated the following benefits:

At six months, average pain relief in the 10kHz SCS treatment arm was 76 per cent (percentage reduction of VAS from baseline) as compared to an average worsening of 2 per cent in the control arm.

At six months, sleep disturbance due to pain in the 10kHz SCS group was remarkably diminished.

Subjects could opt to cross over to the other treatment arm at six months if they had insufficient pain relief (<50 per cent), were dissatisfied with treatment, and were appropriate to proceed as determined by their physician. At six months, 82 per cent of patients who met criteria in the CMM arm elected to cross over, vs none in the 10kHz SCS + CMM treatment arm (p < 0.001).

In summary, SCS and 10kHz therapy now offers individuals with PDN the opportunity of effective treatment. Based on our experience in other areas of SCS we can begin to see long-term treatment.

The number of individuals at risk of developing PDN is growing globally. Too often the symptoms are well-established before the opportunity to provide treatment presents itself. Reversing the injury is difficult with poor prognosis. Clinical history and examination can provide valuable information, but the development of practical bedside QST assessments can provide a reliable, repeatable and non-invasive assessment tool to not only establish the presence of DN disease, but also to track its pattern and guide pharmacology dosing regimens.

Acknowledgements
Dr Hegarty is a Consultant in Pain Management and Neuromodulation at Mater Private Hospital Cork and Clinical Director of Pain Relief Ireland. He oversees the QST assessment clinic for individuals with painful SFN and uses all modalities to offer treatment including neuromodulation/spinal cord stimulation for DPN. Jack Leahy is reading for his
PhD in physiology and provides clinical support for the QST Clinic.

The authors have no conflict of interest. If you feel you have patients who suffer PDN or any SFN that
is refractory to treatment please contact info@painreliefireland.ie for an appointment.