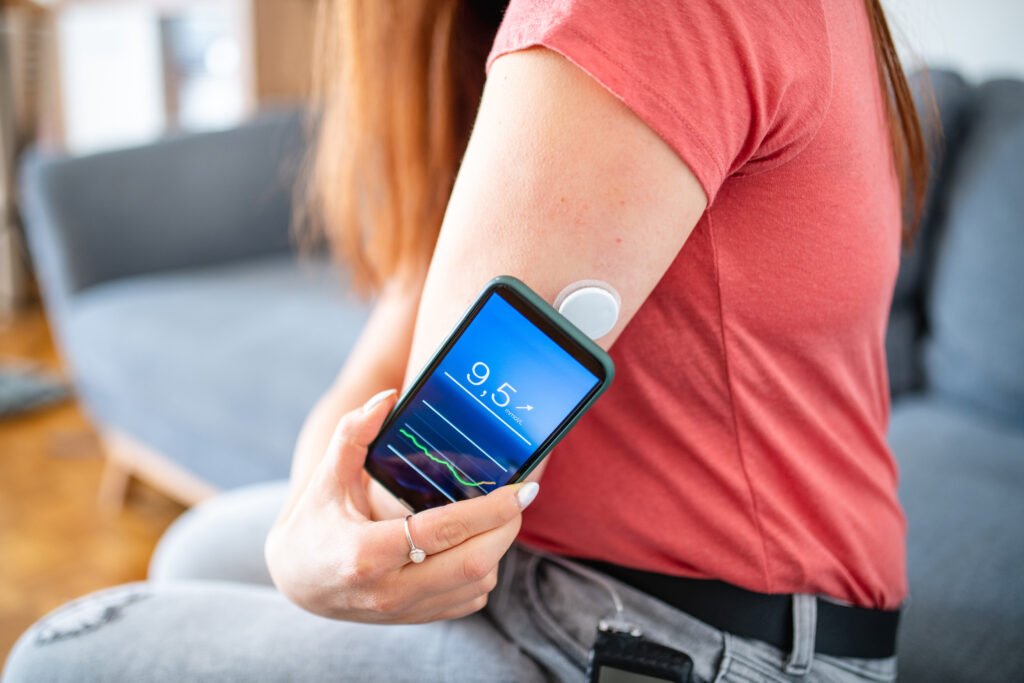 Type 1 diabetes mellitus (T1DM) is a chronic autoimmune condition characterised by autoimmune destruction of the pancreatic beta cell. It is associated with macrovascular and microvascular complications. Tight glycaemic control has been shown to ameliorate the long-term complications of T1DM. Monitoring glucose levels frequently helps patients to achieve more intensive glycaemic control. Fingerprick blood glucose monitoring has traditionally been the most commonly used method. More recently, continuous glucose monitoring (CGM) systems have shown improvements in glycaemic control, reduced frequency of hypoglycaemia, improved recognition of hypoglycaemia and an improvement in quality-of-life. This article will summarise the evidence for CGM and its current role in the management of patients with T1DM.

The field of glucose monitoring in diabetes mellitus has changed dramatically in the last 100 years, from Stanley Rossiter Benedict’s methods for measuring urinary glucose in the early 1900s (using Benedict’s solution), laboratory plasma glucose measurements in the 1950s, self-monitoring of blood glucose with glucose test strips in the late 1970s and early 1980s and finally the availability of the first CGM device in 1999. CGM devices have rapidly improved in the years since and there are now several options available. CGM devices provide interstitial glucose readings from sites in the abdomen or arm and make use of alarms and alerts to improve glycaemic control and reduce frequency of hypoglycaemia. Their use in patients on multiple daily insulin injections or in conjunction with insulin pump therapy has the potential to revolutionise the care of patients with T1DM.

The DCCT trial published in 1993, provides the most definitive evidence that tighter glucose control is associated with better long-term outcomes in patients with diabetes. In the trial, a total of 1,441 patients with T1DM were randomly assigned to either intensive insulin therapy (insulin pump therapy or three or more daily injections of insulin) or conventional insulin therapy (at the time of the study, one-to-two injections of insulin per day).

The trial showed that intensive insulin therapy (which resulted in an average HbA1c of 53mmol/mol compared to 75mmol/mol in the conventionally-treated group) reduced the risk of development of proliferative retinopathy or severe non-proliferative retinopathy by 47 per cent, development of microalbuminuria by 34 per cent, and development of neuropathy by 69 per cent. The trial also showed that even in patients who do not achieve the optimal HbA1c, any improvement in glucose control is clinically significant with a HbA1c reduction of 1 per cent associated with a 40 per cent relative risk reduction in progression of microvascular complications.

There are two categories of CGM – professional CGM (used by physicians in the short-term to help detect fluctuations in glucose levels) and real-time CGM (long-term patient use – RT-CGM). Intermittently-scanned CGM (isCGM) devices (also known as flash glucose monitoring [FGM] devices), such as the FreeStyle Libre device, are included under the umbrella of CGM, but are different to RT-CGM in that they require patients to self-scan to acquire data – a patient with an FGM device who does not self-scan will not have any glucose data to interpret.

There are some important points regarding interstitial glucose readings, as opposed to blood glucose readings, that must be noted. Interstitial readings lag behind blood readings by approximately five-to-10 minutes. The lag time is increased if there are rapid fluctuations in the blood glucose levels. This is particularly pronounced and important at lower levels, where without calibration and/or confirmatory testing, hypoglycaemia can be missed.

Patients using the FreeStyle Libre device must be aware that, because of the discrepancy between interstitial and blood glucose readings, which is particularly pronounced at lower levels, confirmatory fingerpick testing must be carried out if the Libre device shows their blood sugar level is less than 4.0mmol/L, if they are experiencing symptoms of hypoglycaemia, but the Libre device is showing a normal reading or if the Libre trend arrows are showing rapid changes in glucose. The current Libre device does not have an alarm function.

Two of the key features of CGM are alarm systems and trend arrows. Alarm systems, recommended to trigger at interstitial glucose levels <4mmol/L, alert patients to the development of hypoglycaemia and allow them to correct promptly to avoid severe hypoglycaemia. Trend arrows show direction of glucose changes (ie, increasing or decreasing) as well as the rate of change. Guidelines exist for how patients should adjust insulin doses or correct developing hypoglycaemia for different CGM devices. On page 23 is a table explaining the meaning of the trend arrows for the FreeStyle Libre device, as an example.

There is a growing body of evidence for the benefits of CGM in T1DM. Early research showed significant improvements in HbA1c by 0.4-to-0.6 per cent and a reduction in time spent in hypoglycaemic range by 20-to-40 per cent with the use of CGM. Accurate interpretation of CGM data requires >70 per cent use over the 14 days prior to time of review. To streamline data interpretation, time in range (TIR) has been identified as the metric of glycaemic control that provides the most actionable information in those using CGM.

Specifically, TIR, time below range (TBR), and time above range (TAR) are the three metrics to be considered when reviewing CGM data, as a complement to HbA1c monitoring. The primary goal is to increase the TIR while reducing the TBR. In a non-pregnant adult with T1DM, the TAR target should be <25 per cent, the TIR target should be >70 per cent and the TBR target should be <4 per cent. A TIR of 70 per cent correlates well with a HbA1c of 7 per cent. Trial data Perhaps the two largest RCTs in patients with T1DM using RT-CGM are the GOLD and the DIAMOND trials, both published in 2017. The DIAMOND trial randomly assigned 105 patients with T1DM using multiple daily injections to a CGM device (the DEXCOM G4 Platinum CGM system), and 53 to fingerprick blood glucose monitoring at least four times per day. The study ran for 24 weeks. In the CGM group, HbA1c was shown to have reduced by 0.6 per cent.

Time in hypoglycaemic range was 43 minutes per day in the CGM group vs 80 minutes per day in the fingerprick group. There was no significant difference in risk of severe hypoglycaemia in the study period between the two groups. The GOLD trial randomly assigned 161 patients over the age of 18 years with T1DM using multiple daily injections to either a CGM device (the DEXCOM G4 Platinum, the same device used in the DIAMOND trial) or to fingerprick blood glucose monitoring in a 1:1 ratio.

The trial ran for 26 weeks. HbA1c was 0.43 per cent lower in the CGM arm at the end of the trial period. Those using CGM spent 2.79 per cent of the time in the hypoglycaemic range, while those using self-monitoring with fingerprick blood glucose measurements spent 4.79 per cent of the trial period in the hypoglycaemic range. In relation to isCGM or FGM, such as the FreeStyle Libre device, most of the clinical data comes from audit of clinical practice. One of the few randomised controlled trials using Freestyle Libre was published in The Lancet in 2016.

In this trial, 120 patients with well controlled T1DM (HbA1c ≤58mmol/mol or ≤7.5 per cent) were assigned to use the FreeStyle Libre device and 121 patients to self-monitoring of blood glucose for five months There was a 38 per cent reduction in time in hypoglycaemia in the FGM group, without significant change in HbA1c. The ABCD audit published in 2020 using data from 102 NHS hospitals assessed glycaemic control, hypoglycaemia awareness and hospitalisation among 10,370 FreeStyle Libre users for a 12-month period following commencement of FGM. Mean HbA1c was 0.4 per cent lower, with FGM use compared to baseline HbA1c pre-FGM.

In Ireland there is very little data as yet on the benefits of FGM in patients with T1DM. An audit of over 80 patients from three different centres showed similar results to the ABCD audit, with an improvement in diabetes control of 0.4 per cent, improvement in hypoglycaemia awareness, and reduced diabetes distress. On the back of these and other trials, CGM has become a useful tool in the treatment of T1DM.

There are currently three CGM devices available in the Republic of Ireland. These are DEXCOM G6, the FreeStyle Libre Flash Glucose Monitor, and the Medtronic Guardian Connect (standalone CGM devices – also available are insulin pumps with built-in CGM as discussed later).

National guidelines on T1DM published in 2018 did not recommend the routine use of CGM in all patients with T1DM, however, as time goes on and with more data coming through on the benefits of CGM it does appear clear that in patients with T1DM, who are willing to commit to using the CGM device at least 70 per cent of the time, CGM devices can improve diabetes control, reduce the risk and fear of hypoglycaemia, improve hypoglycaemia awareness, reduce diabetes distress and improve quality-of-life, and are associated with less hospital admissions.

CGM has further utility when used in combination with insulin pump therapy. The Medtronic 640G pump, for example, can be combined with CGM (specifically the Guardian Connect device) and, when used in combination, the system can predict low blood glucose levels. Using a predictive threshold suspend feature, the pump can then stop the delivery of insulin via the pump before the patient becomes hypoglycaemic, with an alarm to alert the patient that they are hypoglycaemic and it then will automatically redeliver the insulin once the blood glucose levels rise to a safe level.
The Medtronic 640G sensor augmented pump has been shown to reduce both nocturnal hypoglycaemia by 38 per cent and time in hypoglycaemia compared to patients on standard insulin pump therapy.

The system monitors glucose every five minutes and adjusts basal insulin to keep levels within a tighter range. As with the 670G, the user still needs to manually enter the amount of carbohydrates taken with a meal and administer bolus insulin. The device can also manage correction boluses automatically. Development of fully automated closed-loop systems is ongoing.