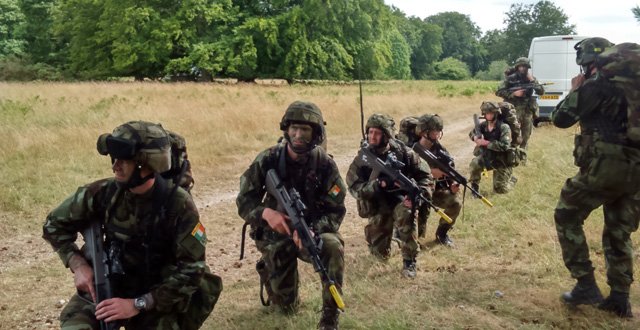 There was a medical element to everything during the exercise, explained Capt Waldron to MI. “But the idea is also that you ensure the scene is safe, that the scene is secure – that you are not walking into an ambush or trap in everything you go into.”

He continued: “The idea was that we were on a UN mission with NATO forces and as we went through a village or a built-up area we had different scenarios as a team of medics, that we faced as we progressed through the village.”

One of the simulated scenarios was a suspected chemical attack on a village.

“We had a mass casualty incident where the medics had to take over and triage people coming out with suspected nerve agent poisoning,” said Capt Waldron.

Capt Waldron said the team wore protective gear and experienced how their senses would be restricted in such scenarios.

“You went in and systematically searched an area and carried out your primary survey and your patient history correctly,” he said.

Another scenario was managing cases such as open fractures and heat exhaustion in a medical treatment facility in a forested area.

The teams were being assessed on clinical and military protocols, he said.

As well as finishing second, the Irish team won Best Officer and Best Non Commissioned Officer during the exercise, with these accolades accorded to Capt Waldron and army medic Sergeant Philip Greene.

The Irish team had also finished second in 2014, in the competition known as Exercise Arduous Serpent.

Winners of the overall exercise were the medical attachment from the British Army’s 5th Armoured Brigade. In third place was 204 Field Hospital from Northern Ireland.