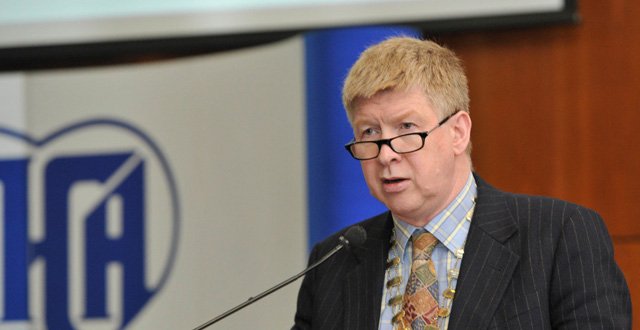 Our acute hospital and mental health services are struggling to care for patients with insufficient front line resources because of the cumulative negative effects of the steep health funding cuts in successive austerity budgets. The growing demand for acute care due to the country’s increasing and ageing population is also a major factor. Demographic changes add 3 per cent per year to the demand for hospital care. However, with successive budget cuts, these increases have not been taken into account or funded.

Although there was a nominal increase in this year’s health budget compared to last year, the overall budget for 2015 was less than the 2014 spend, so hospitals are still being asked to make savings in the face of increasing demands and increasing costs. The result is that there are still cutbacks going on at hospital level.

In my address to our conference last year, I highlighted the unacceptable risks to our sickest patients — those who were waiting on trolleys for emergency treatment. There has been no improvement in their situation over the intervening 12-month period. In fact, despite the efforts of the Emergency Department Taskforce and measures to reduce numbers in hospital awaiting other forms of care, the number of patients waiting on trolleys is worse on a seasonally-adjusted basis than last year. This is because the underlying demand is increasing. We have an increasing population; a population which is getting older. People’s expectation of healthcare is increasing. Ongoing advancements in medicine mean that we can provide more effective treatment for patients, including the elderly, who previously would not have been able to benefit from certain therapies. However, our acute hospitals and community supports are not coping with current demands, let alone investing to provide capacity to deal with future demands.

Based on recent trolley counts and the number of patients awaiting acute care, our hospitals are now facing into a worse crisis this winter than last year

The outcome of this is that conditions are unacceptable for patients. Waiting lists are unacceptably long. It is even doubtful that we will meet the more relaxed waiting list targets put in place by Minister Varadkar, which state that by the end of this year nobody should be waiting more than 15 months for an outpatient appointment, or for inpatient or day case treatment.

These are less stringent targets than those which were previously in place, which demonstrates the extent of slippage in standards that has arisen from the 24 per cent cut in health spending that occurred during the financial crisis and which has not been reversed. Three or four years ago, the HSE’s own target was that nobody should be waiting more than 12 months for an outpatient appointment and the plan was to reduce this to nine months. Instead, the Minister introduced a target of 18 months, which he hoped to reduce to 15 months by the end of the year. The goalposts keep moving — to the detriment of patients.

Based on recent trolley counts and the number of patients awaiting acute care, our hospitals are now facing into a worse crisis this winter than last year. The number of patients being treated on trolleys is at record levels. In August, 6,518 patients were treated on trolleys, even though the decision to admit those critically-ill patients as inpatients had been taken. This was 40 per cent higher than August 2014 and 67 per cent higher than August 2013. In addition, an unacceptably high number of inpatient and day case patients, 68,563 in August, were awaiting essential surgical treatment. The deteriorating situation is primarily due to a lack of front line resources and capacity to treat unscheduled acutely-ill patients who need urgent admission. This in turn is displacing patients who are scheduled for surgery, resulting in cancellations.

The Government and health service management need to address the fact that hospitals just do not have the capacity to treat the number of patients presenting for care on time, because of a lack of front line staff and resources, beds, theatre operating sessions, etc. If these overwhelming shortages are not addressed, I am concerned that front line consultants and doctors will be left struggling to treat an increasing number of patients in emergency departments and overstretched hospitals throughout the autumn and winter. This would be clearly unacceptable from a patient care perspective.

During the financial crisis, we all suffered very significant salary cuts but the cuts applied to new entrants were particularly unfair. These have been a disastrous failure, as shown by the existence of over 230 permanent acute hospital consultant posts that are currently unfilled.

A significant number of additional consultant posts remain unfilled in mental health services. There is no justification whatsoever for a discriminatory policy of this kind. This must be resolved to avoid longer-term damage to our health service. It is often said that our health service did not fully recover from the severe cutbacks of the 1980s and early 1990s. The recent emergency salary cuts can already be seen to have caused immense damage to the Irish health service. Urgent measures need to be taken to limit the impact of this misguided policy.

The difficulty in recruiting consultants is now bringing acute hospital and mental health services to their knees. Huge sums are being spent on agency consultants costing two-to-three times the salary being paid to permanent consultants. The State’s repeated breaches of the 2008 Consultant Contract and the imposition of discriminatory contract terms on new entrant consultants are the fundamental causes of the medical brain-drain and the consultant recruitment and retention crisis. It is a grave concern that our acute services are no longer internationally competitive in attracting and recruiting the number of high calibre consultants that are urgently needed to provide care to patients who are already enduring unacceptable delays.

It is unheard of in any other country that the state would openly breach the contract terms agreed with the profession and signed by public hospital employers with consultants. This is the fundamental reason our highly-trained specialists are emigrating to practise medicine in other countries. We have repeatedly called on the Government and the Minister for Health to honour the agreed terms in the 2008 Consultant Contract so that our acute services can attract the number of high-calibre consultants we need to treat patients in a medically-appropriate time frame.

The viability of delivering private healthcare to patients has been severely compromised by reductions in income and rising costs and overheads. The doubling of medical indemnity charges for consultants in most specialties in the past three years is threatening the viability of private practice. The cost of medical indemnity is forcing consultants out of the private hospital sector, where at present about 40 per cent of elective procedures requiring anaesthesia are carried out.

The Association welcomes the recommendations in the Report of the Oireachtas Joint Committee on Health and Children published in June 2015. The report supports the proposal presented by the Association to the Committee in January on the need to address the increasing cost of indemnity in public hospital and private practice. This includes the need to reform the law, introduce pre-action protocols and lower the existing medical indemnity caps.

The Association is in regular contact with officials in the Department of Health, the State Claims Agency and the Department of Justice to advance the proposals. If unaddressed, more patients will be forced to seek medical care in public hospitals, which will increase the already-growing waiting lists and chronic overcrowding. These issues must be resolved urgently, as with each passing month more consultants in private hospitals are restricting their practice or leaving practice to retire early or emigrate to practise abroad.

Our economy is now improving but unless urgent action is taken by the Government to provide our acute front line healthcare services with realistic funding and resources, we will see a deterioration in conditions for some of the most vulnerable in our society, those who are waiting for access to specialist medical care, the acutely unwell and the elderly.

The Association continues to outline the grave impact of these issues on the capacity and sustainability of the health service to the Minister for Health, health service management, the State Claims Agency and health insurers.

I look forward to seeing as many IHCA members as possible at the 2015 National Conference in Tullamore on Saturday, 3 October. It is very important that we and our invited speakers hear the views of our members on the critical issues that affect the welfare of our patients and our working lives.

The speakers in the 9am session will provide detailed information and insights into practice structure, taxation and pension issues.

This will be followed by the morning scientific session, in which Minister for Health Leo Varadkar; HIQA CEO Mr Phelim Quinn, and I will address the extremely important topic of ‘Delivery of High-Quality Safe Healthcare Services’. The statutory reports and business of the AGM will be addressed before lunch and the afternoon scientific session is focused on ‘Medical Indemnity Challenges for Acute Hospital Services’.

This will be followed by closed concurrent sessions for public contract and private practice members.

Extensive coverage of the 2015 IHCA Annual Conference will appear in the next issue, 8 October, of MI.