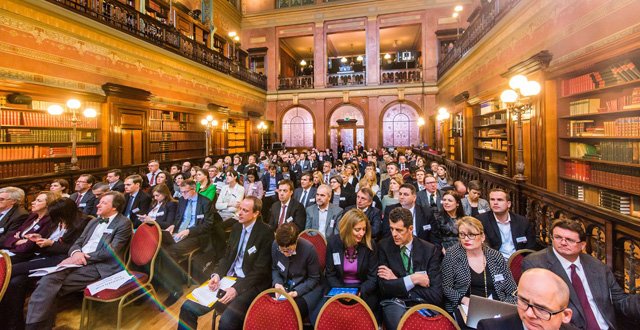 With 37 per cent of the European population expected to be aged 60 or over by 2050, in addition to the ongoing rise in chronic diseases and the current constraints on public finances, European healthcare systems are being required to deliver more and better care with reduced resources. Traditional healthcare systems set up for acute care can no longer cope with these challenges without a fundamental transformation. Thus it is now more important than ever to rethink healthcare systems to maximise sustainability, according to those behind a pan-European sustainable healthcare initiative.

The debate about how best to provide healthcare that is sustainable in the long term has gained an increased sense of urgency at national and international level in recent years. However, finding concrete solutions and best practice examples that can actually contribute to sustainable healthcare systems is not easy. This is why the European Steering Group (ESG) on Sustainable Healthcare was initiated in March 2014, by the biopharmaceutical company AbbVie.

The ESG operates within the framework of the ‘Recipes for Sustainable Healthcare’ programme created in May 2013 by AbbVie.

With representatives from the policy community and civil society, healthcare professionals and scientific societies, academics, and industry, the ESG aims to provide insight and expertise based on evidence and tested examples across 24 countries in Europe and beyond, to help address the challenges facing European healthcare systems. It was tasked with formulating an integrated set of adaptable and scalable solutions to guide the transformation of European healthcare systems. There is a strong Irish element to the initiative, as the Chair of the ESG is former Minister for Health Mary Harney, and there have been a number of successful Irish sustainable healthcare pilots showcased by the project.

During the last year, the ESG met regularly and organised round-table meetings with high-level policy stakeholders at EU level, including representatives from the European Commission, the Council of Ministers and the European Parliament, as well as patient representatives and healthcare professionals.

According to the Group, its findings convinced it of the merits of investing in prevention and early intervention and fostering empowered and responsible citizens. The findings also offered practical, proven ideas for the reorganisation of healthcare delivery.

Life-long prevention, early diagnosis and effective intervention are all important measures in improving the sustainability of healthcare systems, according to the ESG’s White Paper.

Addressing the conference, Ms Harney said affordability and financial sustainability are the biggest issues confronting healthcare providers. “Across Europe, notwithstanding the complexity and differences in how healthcare is funded and organised, we all face the same challenges: How to continue to provide high-quality and universally accessible health services in a financially sustainable way. This White Paper is intended as a contribution to the ongoing debate.”

She said that healthcare expenditure is too often seen in a narrow context — purely as an economic cost. “We in the ESG believe that health expenditure must be seen from a different perspective. The principle of ‘Health is Wealth’ still applies. At an economic level, health expenditure organised well and delivered at the right time will reduce other welfare costs, speed-up the return to work for patients and generally improve productivity.”

Dr Pascale Richetta, member of the ESG and Vice President, Western Europe and Canada operations, AbbVie, said rather than create another ‘think-tank’; AbbVie has created a ‘do tank’. She noted that the EU is now experiencing a shortage of doctors for the first time and stated that countries must work together, not in isolation as currently happens, to successfully address the major challenge of healthcare sustainability.

A number of the successful individual projects chosen by the ESG as examples to be replicated across Europe were showcased at the meeting. One Irish project that was highlighted was the Irish Longitudinal Study on Ageing (TILDA), which has provided important insights into the population’s health trends and informed healthcare policy development in Ireland. For example, TILDA findings show that risk factors for chronic diseases, heart attacks and strokes such as high blood pressure and irregular heart beat are undiagnosed in the older population, while the most recent data shows that nearly four out of five adults over the age of 50 are overweight or obese. The study has trialled new technology to provide detailed health monitoring and measurements that can provide early warning signs in those aged over 50.

Speaking to the Medical Independent (MI) in Brussels, Dr Dermot Power, Consultant Geriatrician, Mater Hospital, said his assisted discharge project had improved patient care and saved the hospital money after a reasonable financial investment. However, he warned that while technology was very useful in healthcare, “patients do not want to be cared for by an iPad” and want more interaction with doctors, not less.

One of the most successful projects showcased during the meeting was the Rheumatology Early Intervention Clinic project carried out by Hospital Clínico San Carlos in Spain. Through early diagnosis, referral and intervention programmes, the Clinic was able to reduce the number of sick days, the use of healthcare resources and social security compensation payments and the development of permanent disabilities. The project demonstrated that every €1 spent can generate total savings of €11 in health and social welfare. Speaking to the MI in Brussels, Prof Brian Caulfield, Senior Lecturer, School Of Public Health, Physiotherapy and Population Science, UCD, said he was very impressed that the Spanish project, like many others highlighted by the ESG, was not simply about new technology or increased costs, it was about simple but effective process changes. “The Clinic has had fantastic results and all it is really about is organisational change,” he commented.

Speaking to this newspaper at the event, Ms Harney said the challenge now would be scaling-up the successful pilots and making them work within different health systems.

“I think this initiative by AbbVie is fantastic, because they’ve put a huge amount of effort and time and resources into the project. I see huge commitment. I think the reason they’ve done it is, as a player in the healthcare ecosystem, as an industry in the system, it is in everybody’s interests to play a part. I think in particular the more people we can get around the table, the better. From industry, from healthcare professionals, from patient organisations to NGOs, policy-makers, former policy-makers, academia — whoever has a contribution to make, I think that is important. The EU has a role to play, even though competency rests with member states around some of the issues around sharing information.”

She said she thought that what was being suggested in the White Paper and accompanying Call to Action document was appropriate to all the health systems in Europe. “And it is very much in line with Government policy in Ireland and has been for a while.

“What we are suggesting here is, we are not saying it will happen tomorrow or next week. The big plus in this project I think, is that our suggestions are based on things that have actually worked. The challenge for us is to see how we can scale them up over the next five years, in particular how to transfer from one place to another, notwithstanding the differences in how healthcare is organised. So, for example, the clinic in Spain, which is so impressive — 11-to-one benefit; that is now going into the UK and maybe there is possibilities for that in other places,” she said, adding that she would like to see it replicated in Ireland.

For more information on the sustainable healthcare initiative, go to www.abbvie.com/sustainable-healthcare/index.html

The anatomy of Sustainable Healthcare for Ireland

Sustainable Healthcare for Ireland: A Journey of Innovation and Partnership was launched last November. The document was commissioned by AbbVie and produced by an expert steering group from healthcare, education and industry, chaired by Mr Vincent Barton, MD of Prospectus Management Consultants.

The report called for the creation of a national framework to identify, adopt and scale-up the practical and effective solutions for sustainable healthcare that already exist within the Irish healthcare system.

The document outlined 13 relevant initiatives showcasing innovation and creative thinking within the Irish health system, under the themes of prevention, self-management and early warning and access. These incentives, if applied or scaled-up to a system level, could contribute to making the system more sustainable.

One of the initiatives was the STOP Heart Failure project led by Dr Ken McDonald, Director of the Heart Failure Unit at St Vincent’s University Hospital, Dublin, which showed that using a specific blood test and employing a shared-care approach can dramatically reduce hospital admissions for cardiovascular diseases.

The study included patients with a wide variety of cardiovascular risk factors from 39 general practices along the east coast. Those patients with an elevated blood test result received specific cardiac care, along with ongoing care from their GPs. The study found that this approach reduced the occurrence of heart failure and significant heart dysfunction by 45 per cent and reduced hospital admissions for other cardiovascular events such as heart attack and stroke by 40 per cent.

The Sustainable Healthcare for Ireland document formed part of the pan-European White Paper launched in Brussels.