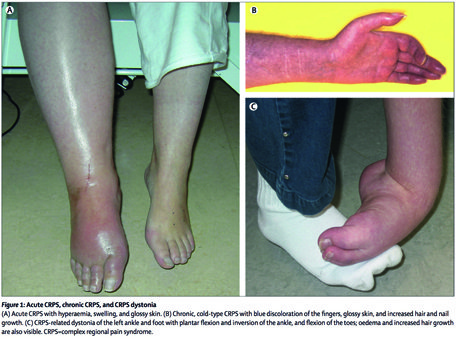 Complex regional pain syndrome (CRPS) is a debilitating, painful condition in a limb associated with sensory, motor, autonomic, skin and bone abnormalities. It was originally recognised in 1872 during the American Civil War as a result of gunshot injuries to limbs, but the possibility of it being present in ‘civilian’ life is relatively recent.  Pain is typically the leading symptom, but is often associated with limb dysfunction and psychological distress. CRPS can strike at any age and affects both men and women, although it is five times more common in women. The average age of affected individuals ranges between 55-70 years. Children do not get it before age five and only very rarely before age 10, but it is not uncommon in teenagers. A European epidemiological study highlighted that the incidence of CRPS is more common than previously thought, with an incidence of 26 per 100,000 population. For comparison, the incidence of multiple sclerosis in the UK is estimated at four in 100,000.

The physical, psychological and economical costs are enormous. Prompt diagnosis and early treatment is required to avoid secondary physical problems related to disuse of the affected limb and the psychological consequences of living with undiagnosed chronic pain.

Guidelines have recently been developed for diagnosis and management in the context of primary and secondary care. The International Association for the Study of Pain, recently held their specialist group meeting in Cork (www.CRPSCork2017.com), see meeting report on page 30.

What are the symptoms of CRPS?

The symptoms may present within the first four-to-six weeks following an injury. However, it may present later in some individuals. A key symptom is prolonged pain that may be constant and, in some people, extremely uncomfortable or severe. The pain may be described as a ‘burning’ or ‘pins and needles’ sensation, or as if someone is squeezing the affected limb. The pain may spread to include the entire arm or leg, even though the precipitating injury might have been only to a finger or toe. There is often increased sensitivity in the affected area, so that even light touch or contact is painful (called allodynia).

The severity of CRPS can vary as it progresses through different stages but there are certain elements as described by the Budapest Criteria (2010) (Table 1).

Constant or intermittent changes in temperature, skin colour, and swelling of the affected limb. This is due to abnormal microcirculation caused by damage to the nerves controlling blood flow and temperature. An affected arm or leg may feel warmer or cooler compared to the opposite limb. The skin on the affected limb may change colour, becoming blotchy, blue, purple, pale, or red.

Changes in skin texture on the affected area; it may appear shiny and thin.

Abnormal sweating pattern in the affected area or surrounding areas.

While CRPS can be divided into two types based on the absence (type 1, much more common) or presence (type 2) of a lesion to a major nerve, the subtype of CRPS has no consequences for the general approach to management. The cause of nerve damage in CRPS 2 should always be clarified – urgently in acute cases.

The diagnosis of CRPS cannot be made on imaging or laboratory tests. The condition is diagnosed on the basis of clinical criteria shown in Table 1.

Aetiology and course of CRPS

The cause of CRPS is currently unknown but it appears that a cascade of biochemical events ‘fuel’ this condition. Consistent features of CRPS are much more common than most clinicians realise – occurring in up to 25 per cent of minor limb injuries. Approximately 15 per cent of sufferers will have unrelenting pain and physical impairment >five years after CRPS onset, although more patients will have a lesser degree of ongoing pain and dysfunction impacting on their ability to work and function normally.

Precipitating factors include injury and surgery. However, there is no relationship to the severity of trauma while in some cases there is no precipitating trauma at all (9 per cent).

It is also now clear that CRPS is not significantly associated with a history of pain-preceding psychological problems, or with somatisation or malingering. In fact, patients still report feeling stigmatised by health professionals who do not believe that their condition is ‘real’. However, patients may require psychological intervention and support to deal with the particularly distressing nature of CRPS symptoms.

Prompt diagnosis and early treatment is required to avoid secondary physical problems associated with disuse of the affected limb and the psychological consequences of living with undiagnosed chronic pain. Persistence of pain in the injured arm /hand is the only feature that may bring attention to the possibility of the diagnosis in the first few weeks. Particular attention should be given to individuals who seem to ‘need’ several plaster cast changes.

In the early stages it is important to consider the following treatment options:

a)   Have a low threshold to refer for review to orthopaedic/fracture clinics if you have any concern. Remember the acronym CRPS (colour, reduced movement, pain, swollen limb) to help identify possible cases.

b)   Seek experienced physiotherapy management to encourage gentle movement as early as possible. This may potentially prevent progression of symptoms. Except in mild cases, patients with CRPS are generally best managed in specialist pain management or rehabilitation programmes.

c)   Introduce regular analgesics such as paracetamol, tramadol and/or non-steroidal anti-inflammatory medication. The role of this is to allow rehabilitation proceed smoothly.

d)   Where possible consider pregabalin in low dose until reviewed.

f)    Review the progress of the symptoms regularly and titrate the analgesics prescribed to meet the individual needs. Consider pain management referral if not already in place.

g)   An integrated interdisciplinary treatment approach is required. Ensure you are an active member of the multidisciplinary team and are aware of the rehabilitation progression. Things can change quite quickly for individuals with CRPS. There are advanced treatment options for CRPS that revolve around intensive rehabilitation and pain procedures.