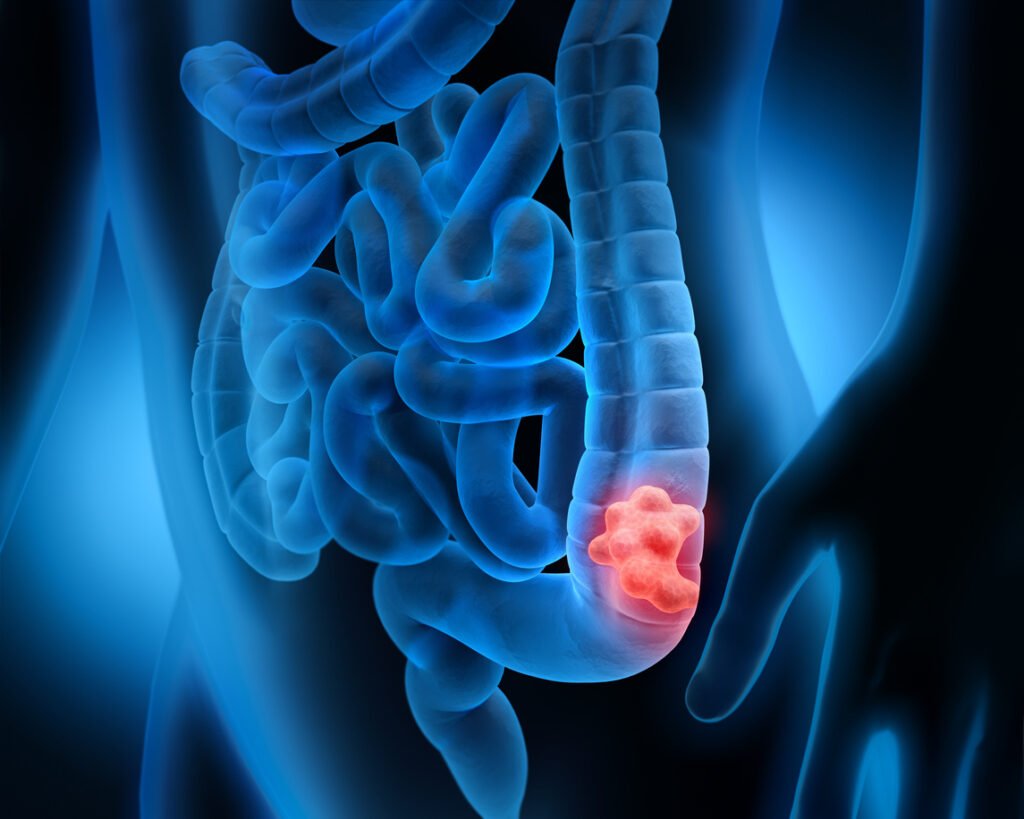 Colorectal cancer is the commonest malignancy of the gastrointestinal tract and represents the fourth leading cause of cancer-specific mortality worldwide. In Ireland, it is the third most frequently diagnosed cancer in males (1,597 cases/year) and the fifth most frequently diagnosed cancer in females (1,104 cases/year). It is most often diagnosed after the sixth decade of life, with a median age at diagnosis of 63 years in males and 72 in females. Nationally, as in the Western world, colorectal cancer survival is consistently improving over time, with an age-adjusted survival rate of 62.6 per cent for Irish patients diagnosed between 2009- 2013 compared to 49.9 per cent for those diagnosed between 1994-1998. Well-defined risk factors for the disease include a positive family history, male sex, a ‘Western diet’ with high intake of animal-based and processed foods, smoking, the presence of metabolic syndrome and longstanding inflammatory bowel disease involving the colon. Rectal neoplasms account for over one-third of all colorectal malignancies, with the sigmoid (27 per cent) and caecum (14 per cent) the next most frequently involved anatomical sites. High-risk symptoms and signs, which warrant urgent investigation include rectal bleeding persisting >six weeks, a change in bowel habit to looser stool or increased frequency persisting >six weeks, unexplained iron-deficiency anaemia and a palpable rectal or right-sided abdominal mass.

In patients with lower GI symptoms suspicious for a colonic or rectal neoplasm, full colonoscopy is the investigation of choice and permits immediate biopsy for tissue diagnosis if a lesion is detected. CT colonography is an alternative in selected patients. Population screening for colorectal cancer (BowelScreen) was introduced in 2014 for those aged 60-69 years. Screening is by stool sample every two years, which is assessed for occult blood by FIT (faecal immunochemical testing). Those with a positive FIT test are invited for full colonoscopy. In those with a low-risk family history, surveillance beyond population screening is not recommended. This includes a colorectal cancer diagnosis in non first-degree relatives only, and a diagnosis in one first-degree relative ≥50 years of age. For those with a moderate-risk family history, colonoscopy may be offered starting at 50 years on a five-yearly basis. This includes one first-degree relative diagnosed at <50 years, two first-degree relatives diagnosed at ≥60 years, and ≥three affected relatives in a first-degree kinship. Staging comprises a pre-operative CT thorax, abdomen and pelvis (TAP) to assess for the presence of distant metastases. For rectal neoplasms a pelvic MRI is also indicated to assess the degree of local invasion, presence of lymph node involvement and involvement of the circumferential resection margin. Reporting of microsatellite status at histology is now routine. As management paradigms differ between colonic and rectal tumours, the height of the tumour should ideally be confirmed with rigid sigmoidoscopy prior to embarking on treatment.

Colonic tumours amenable to curative treatment are managed with upfront surgery with or without adjuvant chemotherapy, depending on the degree of local extension, nodal status and presence of adverse pathological features. As mentioned above, rectal cancer is a distinct entity to colonic cancer in terms of management. Selected early rectal cancers (T1N0) may be successfully treated with transanal local excision alone. Locally advanced (stage II and III) rectal cancers may be downstaged or downsized with neoadjuvant chemoradiotherapy (nCRT), unlike more proximal colonic tumours. Neoadjuvant CRT is typically followed by definitive surgery with or without adjuvant chemotherapy as for colonic cancer. A proportion of patients (10-35 per cent) will have a complete pathological response to nCRT. Trials are currently ongoing as to the long-term outcomes of a strategy of active surveillance as an alternative to surgery in selected patients with a clinical complete response after nCRT. At present surgery after completion of nCRT remains the standard of care. Where oligometastatic disease is present, eg, an isolated lung or unilobar liver metastasis, patients may still be eligible for curative resection. For those with metastatic disease where cure is not achievable, systemic chemotherapy is the mainstay of treatment. Excision of the primary may be appropriate if it is symptomatic, eg, with obstruction or bleeding. Targeted anti-EGFR monoclonal antibody treatments are also available dependent on tumour KRAS mutation status; these include cetuximab and panitumumab.

Colorectal cancer in the young

Although the overall incidence of colorectal cancer in Ireland has remained remarkably stable over the past two decades, data suggests that in many European countries CRC incidence in the younger population (<50 years/age 20-49) appears to be increasing. Although there is no agreed definition of ‘young-onset’ colorectal cancer, most literature includes cancers occurring in people ≤50 years of age. While a proportion of these are due to inherited colorectal cancer syndromes such as Lynch syndrome, familial adenomatous polyposis and others, 50 per cent are sporadic. Sporadic early-onset colorectal cancer (EOCRC) demonstrates some distinct features comparative to the disease, which occurs in the older age group.

The vast majority of the increase in incidence is accounted for by left-sided tumours, with little-no increase in right-sided neoplasms. Compared to the older age group, a greater proportion of early-onset colorectal cancers present symptomatically, rather than being detected incidentally or by screening. However, the interval from onset of symptoms to diagnosis is on average six months greater for EO-CRC than in older adults. As such, EO-CRC patients tend to present with a more advanced stage at diagnosis, with 71 per cent diagnosed at stage III or IV. In addition, signet-ring and mucinous histology and poor differentiation is increased in EO-CRC. However, these factors do not confer a worse prognosis, with stage-adjusted survival improved comparative to older patients. Colorectal cancer in the young requires several considerations. A thorough family history is vital to exclude a defined hereditary colorectal cancer syndrome, as this will have implications for surveillance of relatives and decisions regarding referral for germline mutation testing.

Given the longer expected survival in younger patients, long-term health-related quality-of-life (HRQOL) is of critical importance. This includes preservation of a functional sphincter complex, avoidance of a permanent stoma and preservation of autonomic nerves responsible for bladder and sexual function where possible. Other special considerations include fertility and the potential impact of pelvic radiotherapy and surgery, especially in female patients of childbearing age.