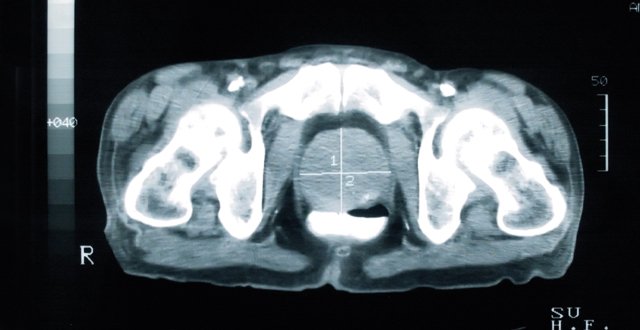 A 68-year-old male presented via the emergency department with worsening confusion over the course of one month and a background of metastatic castration-resistant prostate carcinoma (CRPC). He had been diagnosed seven years previously in May 2007 with Gleason grade 4+5 prostate adenocarcinoma, de novo metastatic to his lumbar spine and had a PSA of 750ng/ml at diagnosis.

He was initially treated with hormone therapy, including an LHRH agonist (leuprorelin) with good response and his PSA dropped below 4ng/ml. Subsequently, an anti-androgen (bicalutamide) was added in April 2010, in response to a PSA increase and the development of liver lesions, which were biopsy-proven to be metastatic prostate carcinoma. A third-line hormonal agent (flutamide) was added in May 2011, again after a PSA rise and when a new left scapular lesion was found. His PSA level fell with these treatments to a nadir of 30ng/ml and subsequently fluctuated between 30ng/ml and 60ng/ml over the next three years prior to this admission.

On admission, he had an abbreviated mental test score (AMTS) of 6/10 and was markedly off his baseline of cycling and chopping wood. He was noted to be mildly ataxic on examination and had a mildly-elevated C-reactive protein (CRP), but normal white cell count (WCC) and absolute neutrophil count (ANC). His PSA was stable at 49.96 ng/ml (having been 59.47 ng/ml one month earlier). Chest X-ray, urinalysis and the remainder of the examination, including neurological examination, were otherwise
unremarkable.

CT thorax, abdomen and pelvis (CT TAP) revealed progression of his known left scapular metastasis but the other bony metastases appeared stable and radiologically there was no evidence of any other cancer site. Both small liver lesions were stable. A CT brain was performed to uncover any organic causes, which revealed multiple round enhancing lesions in both cerebral hemispheres with surrounding vasogenic oedema, consistent with diffuse intracranial metastases.

He was commenced on steroids and underwent whole-brain radiotherapy (3,000 cGy in 10 daily fractions), improving significantly with same, back to his baseline cognitive function and was discharged home. He was advised not to return to cycling, given his diagnosis.

Prostate carcinoma is an important health issue in Ireland, as it is the most common cancer diagnosed in males when cases of non-melanoma skin cancers are excluded. The incidence of prostate cancer is also increasing, with 3,451 cases in Ireland in 2011, as compared to 1,494 cases in 1999.

Despite success obtained with hormonal therapy for prostate cancer using chemical or surgical castration, many patients eventually progress to CRPC. Previously, options were limited for CRPC.

However in 2004, docetaxel chemotherapy emerged, showing it could significantly improve survival.

With improved clinical management and better therapeutic options resulting in a prolongation of survival in this patient cohort, there is potential for rarer sites of metastases to develop and become clinically apparent.

Increased awareness of the potential for brain metastases in CRPC will aid early investigation, diagnosis and treatment of this condition, which will improve patient outcomes and quality of life

Docetaxel, the first-line chemotherapeutic agent for CRPC, does not cross the blood-brain barrier, and so has limited efficacy on cerebral micrometastases. The incidence of cerebral metastases in prostate carcinoma has historically been extremely low, with very few cases reported in the literature. However, brain metastases from prostate cancer do appear to be on the rise, with increasingly frequent case reports in the literature.

This coincides with the evolving patterns of metastatic CRPC recognised in a recent review of same (Tsao et al). Improving hormonal and chemotherapy regimens, earlier diagnosis and improved management, have meant survival time is longer than ever before.

In Ireland, this is highlighted by the increasing prevalence of prostate cancer as measured by the National Cancer Registry Ireland (NCRI). As a consequence, the disease course is now progressing to more advanced states more frequently and rare sites of metastasis are being observed more commonly.

However, recent advances, including abiraterone, enzalutamide, cabazitaxel, sipuleucel-T and radium-223, have provided more treatment options in the armamentarium against CRPC, thus allowing patients, many of whom have coexisting comorbidities given their age, an improved prognostic outlook.

Furthermore, two recently-published, randomised, controlled trials (STAMPEDE and RTOG 0521) have shown a survival benefit in patients who receive docetaxel in an earlier setting. While docetaxel does not cross the blood-brain barrier, it raises the possibility of earlier disease control and potentially the patient in the case report would have benefited from this.

This article presented the case of a 68-year-old man who developed brain metastases from prostate cancer. This is a rare finding but is increasing in incidence due to better disease control and constantly improving therapeutic options, which result in improved survival times.

In this case, the patient was diagnosed with de novo metastatic prostate cancer and there are valuable learning points with regard to his diagnosis and management. His diagnosis was unexpected and in fact his CT brain, which ultimately provided the diagnosis, was set to be cancelled due to the perceived low likelihood of diagnostic value. However, once diagnosed and treated for his brain metastases, the patient made a full recovery and went home.

Brain metastases from prostate cancer do appear to be on the rise, with increasingly frequent case reports in the literature

Both clinically and radiographically, there was no evidence to suggest a coexisting second primary tumour. Other studies have felt the need for brain biopsy to confirm diagnosis. Given the scapular metastasis had progressed on CT and the radiographic appearances on the CT were in keeping with metastases rather than primary CNS tumour, clinically there was no doubt as to the conclusion that these metastases must have been from his known metastatic CRPC and we did not proceed to brain biopsy.

Increased awareness of the potential for brain metastases in CRPC will aid early investigation, diagnosis and treatment of this condition, which will improve patient outcomes and quality of life.

This case highlights that the potential for rarer sites of metastases to develop and become clinically apparent is increasing as a result of improved clinical management and better therapeutic options, which have led to a prolongation of survival in this patient cohort. Recognising this increasing incidence is important for aiding prompt investigation of these symptoms and improving patient outcomes, as highlighted by this case. Early diagnosis can significantly impact on patient care and the patient’s quality of life.