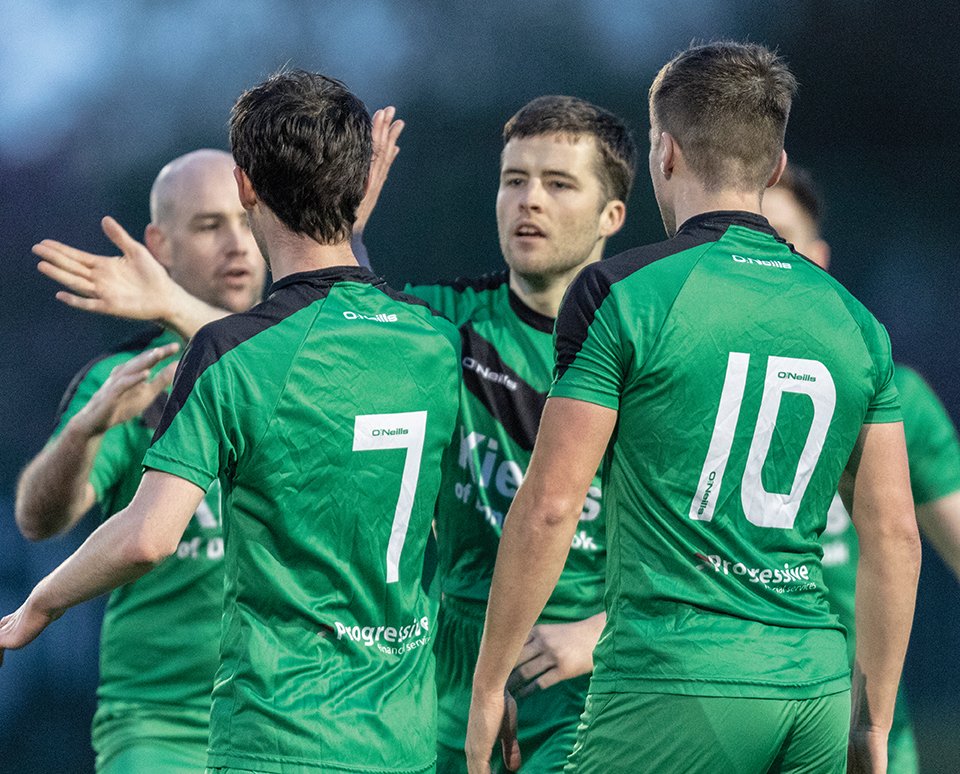 A calm spring evening created ideal conditions for football at St Benildus, with no sign of the blustery winds that so often adversely impact the quality of play. Vincent’s kicked off knowing only a win would do. With key players Rory Durand, Aidan McGrath, Eddy Wrynn and John Cosgrove unavailable, the rest of the team knew they had to step up in their absence. The opening exchanges saw the home side seize control. Andy Delaney, Peter Kelly and Mark Dwyer took ownership of the midfield, winning possession and establishing a platform to build off. Moving the ball well across the field, Vincent’s probed for openings in the well-drilled CIE defence. Paddy O’Connor came close with a free kick and James Clarke blazed over a short while later from close range. As the pressure mounted, CIE began to lose their discipline and had a number of players receive yellow cards. Vincent’s were eventually rewarded for their dominance. Clarke cut in from the right and saw a rasping effort blocked by a lunging defender and the rebound popped into the path of Fionn Lynch. Lynch took one touch and calmly slotted into the bottom corner from close range. 1 – 0 at the interval.

CIE established a foothold in the second half, though did not look to have the firepower up front to open the Vincent’s defence. A long-range effort seemed their best chance, and that is how the leveler came.  Some loose play saw the ball roll to the feet of the opposing number 7, who bent a looping effort into the top corner from the edge of the area. 1 – 1. The game did not stay level for long. From a throw-in, the ball fell to James Clarke 25 yards from goal. Clarke showed wonderful balance and technique to crash a first time half volley into the roof of the net. A truly spectacular goal to make it 2 – 1. CIE had a man sent off for a second yellow soon after. Vincent’s looked like the only team who would score again in the closing stages. Ronan Murray nearly marked his return from injury with a goal, while Dwyer saw a long-range effort flash past the post and Delaney put a lobbed effort just over the bar.

2 – 1 the final score. There was nothing easy about this game. Vincent’s scrapped for every ball, and that bit of extra quality saw them come away with the all-important three points.

The precarious league position and return of a few key performers has galvanised the squad in recent weeks. Andy Delaney’s comeback from injury and Ireland U-19 team commitments in particular has been a massive boost. The GP and club stalworth brings an abundance of experience and leadership both on and off the pitch and has been a driving force behind the recent string of good results. Players all over the pitch have shown pride, grit and determination to turn things around in recent weeks. It would have been easy to fade away and plan for next season, but the squad is not ready to give up on this one just yet. Only a short while ago the league table did not make for comfortable viewing, but now there is at least a glimmer of hope looking towards the final game of the season.

James Clarke capped a strong performance with a stunning strike to win the game. The trainee vascular surgeon and former Monaghan United player has hit his stride in recent games. James is a new addition to the Vincent’s squad this season, and is regaining his form after a period away from the game. A Swiss army knife type, he combines footballing intelligence, a classy first touch and a powerful engine to impact games across a number of positions. James seems to improve on a weekly basis and the club looks forward to having him around for many seasons to come.

St Vincents final league game of the season is an away tie against Dunboyne FC on Wednesday 1 May. Dunboyne are a few places behind Vincent’s in the league table, but have games in hand. The club will hope results in the relegation battle will go their way, and make this game a straight-up playoff for survival.

Training continues every Wednesday evening until late April, and we are always looking for new faces to get involved. Follow the St Vincent’s Hospital FC facebook page, or get in contact via email svuhfc@gmail.com