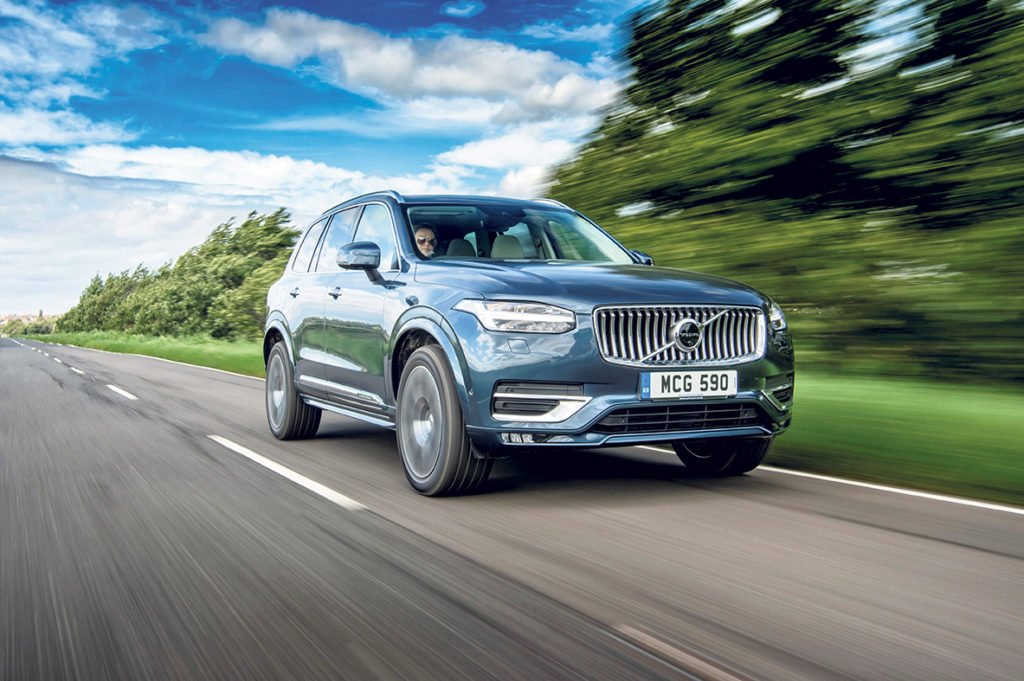 It feels a little odd to write a car review while many of you are on the front line, tackling Covid-19 around the country, and the world, but hopefully you can find some time to decompress and enjoy the witterings that follow. If you’ve found your car a little cramped as you take a well-earned break from saving the world, then perhaps it’s time you considered getting a giant, comfortable SUV to be your home away from home. If that sounds interesting then read on, because the XC90 is terrific.
Volvo’s flagship SUV, the XC90 is the company’s best seller, having clocked up 320,000 units sold worldwide, and since its reveal in 2003 it has amassed a plethora of car and SUV of the year awards. Long story short, it’s bloody terrific and always has been. The marque, which is now built in China, has refreshed the look of the flagship SUV and I was lucky enough to be handed the keys to an XC90 B5 R-Design.

This car is big and comfortable, without being ugly or slow. The refreshed XC90 has some subtle upgrades like, new wheels, colours and a modern new grill, as well as the brilliantly named Thor’s Hammer headlights. This car can be ordered with various seat arrangements, from the four-seat Excellence variant to the seven-seat family SUV. My test car was a seven-seater and believe it or not you can fit adults, not very comfortably, in the back row, which also folds away to increase the boot capacity. Most importantly, the cabin is spacious enough for four man-sized medics to have a nap after a stint at the coalface.
The test model I was given is full of optional extras, but if you’re considering buying one there is only one piece of trim that you can’t do without, which is the parking camera. A pal of mine bought the smaller XC60, blew big bucks on the top of the range T8 engine and decided to save a few euro by avoiding the parking camera. Suffice to say he greatly regrets that decision and is now afraid of carparks.

This car drove very nicely for something so big. Yes, it felt a little large when negotiating one of the capital’s narrow multi-storey carparks, but thanks to its war chest of drivers aids, the behemoth felt manageable for its size. Long commutes were simply blissful as it glided over the pockmarks that festoon Ireland’s road networks and it’s also worth noting that the infotainment system is, in my opinion, one of the best I’ve used and offers both Apple Carplay and Android Auto.
As I’ve mentioned before, this brand invented the three-point seat belt and gave it away, patent free, in order to save lives, so as we all know safety is first for Volvo. The XC90 offers drivers help with steering with both the City Safety and the Blind Spot Information System.  I dislike the City Safety Autobrake system, because it gave me several frights while parking in Dublin, but it is the only system on the market to recognise pedestrians, cyclists and large animals. The XC90 also offers Oncoming Lane Mitigation, while the Cross Traffic Alert technology now also has autobrake. This combined with the safety cage that forms the core of the passive safety technology makes the XC90 one of the safest SUVs available on the market.
The XC90 I tested came with the new B5 engine, which utilises kinetic energy recovered during braking, to assist the diesel engine. This, Volvo says, offers drivers up to 15 per cent fuel savings and emission reductions in real world driving. The engine produces 230hp, is in the €390 road tax C band, and has fuel economy figures of 6.9-7.5 l/km (37-40mpg). That 230hp will get this behemoth from 0-100kph in 7.8 seconds and on to a maximum speed of 220km/h. I’m not a fan of the rattle-n-hum of diesel motors in supposed ‘luxury’ cars, but it’s a decent engine. The B5 diesel, mild hybrid engine should be the bestseller in Ireland, however the Swedish marque also offers the XC90 with a wonderful T8 Twin Engine, plug-in hybrid motor. This supercharged and turbocharged petrol powerplant gives up 303hp and an additional 87hp from the electric motor. That means 0-100kph in 5.8 seconds, 52g/km co2 (meaning sub €200 road tax) and decent MPG, provided you’re making use of the electric motor. It is more expensive, but I would consider it to be a solid investment.
As regards money; the base XC90 starts at €52,173, the model I tested starts at €77,970 and with all the options the final figure stands at €94,339, but for that you’re getting a hell of a car. Walking around the leafy lanes of Dublin 4 it appears that every second car is an XC90, so you may have to trade exclusivity for quality if you decide to pick one up. But for a big family SUV you’d be mad not to consider a Volvo XC90.