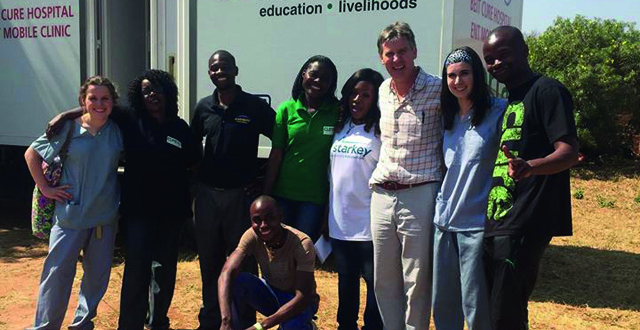 Mr Kieran O’Driscoll, Consultant ENT surgeon, Midland Regional Hospital, Tullamore, plays down his role in bringing help and hope to thousands of patients in Zambia, but the evidence shows that his work over more than a decade has been life changing in the African nation.

His vision and philosophy have been the keys to that success. Rather than dwelling on a problem, Mr O’Driscoll likes to get cracking on a solution, or in his own words “when something needs to be done you have to make a start”, and that is exactly what he did in Zambia.

When he discovered in 2003 that the country was essentially bereft of ENT care and desperately needed help, he came up with a plan—he had a mobile ENT clinic built in Ireland. That was a first, and he then had it transported to Zambia. Today that mobile clinic is serving more than 4,000 people a year.

Mr O’Driscoll, who has been a consultant in Tullamore for two decades, was a TCD graduate in biochemistry. He then moved into medicine and graduated in 1985. He left Ireland and completed his post fellowship training in the US and then completed further specialist training in Australia.

He traces his involvement in Zambia back to an online advertisement for short-term ENT locums there 12 year ago. But when he followed up the ad no one knew what he was talking about, so he decided to go to Zambia and check the situation for himself.

“There was actually no place that I could have gone to. There were four ENT surgeons working in the University Teaching Hospital in Lusaka [the capital] under great strain and stress. So it was apparent from visiting them that these people could not cope with what was going on and needed help,” Mr O’Driscoll tells the Medical Independent (MI).

He found much misery and suffering. People were dying because of ear infections and deafness was rife. There was no access to treatment and no audiologist or hearing-aid service existed. Late diagnosis meant people were suffering with head-neck issues and many had to leave their communities when their conditions became disfiguring.

Firstly, Mr O’Driscoll set about building an extensive network of contacts, starting with local organisations. These included a German charity, the Christian Blind Mission (CBM), the SMA Fathers, the University Teaching Hospital in Lusaka and the Beit CURE International Hospital of Zambia, which was established in Lusaka in 2004 in an agreement between CURE and the Zambian Ministry of Health to operate a paediatric teaching hospital, specialising in the treatment and care of children living with disabilities.

In 2004, Mr O’Driscoll set up a medical-based charity, ENT Surgery for Zambia Trust Fund, to help provide surgical services and develop training and ENT facilities in Zambia. Gorta and Irish Aid also became involved and soon impressive results began to flow from the fusion of these local and Irish forces.

In 2006, work began on providing the ENT mobile clinic. This was completed in 2009 and was the first of its type to be built in Ireland. It was formally opened in 2010 by the then Irish President Mary McAleese, who launched it on its 8,000km journey from Dublin to Lusaka.

Once you start something you can’t turn your back on it. It has to be nurtured and supported. It’s about helping people help themselves. That can be a life-changing thing to do .

“The functioning ENT unit at Beit CURE that opened in 2010 is now served by a German ENT surgeon who’s there on behalf of the Christian Blind Mission, with whom I am a partner in the unit. There’s an audiologist there and we’re training audiotricians so it’s like an institute of ENT.

“That’s functioning every day with outreach clinics during the week with the mobile clinic and surgeries at the hospital when needed. So it’s a growing unit and one that’s a developing centre for ENT,” Mr O’Driscoll says.

“At the mobile clinic we see about 4,000 patients a year and 70 to 100 per week at the clinic in the unit itself in Beit CURE. The mobile clinic is also used for training and for health centres for the examination and screening of patients with ear, nose and throat problems, so the combined activity serves about 4,000 individuals per year.”

Mr O’Driscoll takes time out during his holidays to visit the unit about twice a year to support it and to carry out surgeries there with the other ENT surgeon, as well as working with the mobile clinic.

He is clearly pleased at what has been achieved so far and says it essentially started as a marriage between two projects.

“It’s certainly not a personal achievement. It’s more of an amalgamation of various parties working together. The Christian Blind Mission, which was endeavouring to treat people, were looking for a group of people who could help and we were around at the time looking for someone to help us.

“I’ve been working with them since about 2006, and we combined forces in 2010 to get the clinic built.

“Irish Aid helped financially in the development of the hospital extension for the ear, nose and throat theatre and with the building of the institute itself, while the German equivalent of Irish Aid helped the Christian Blind Mission, so they were the organisations involved in the construction and maintenance of the ENT unit.

“The building was provided by the Beit CURE foundation and CURE International, which came together to form that hospital and provide ear surgery, plastic surgery and orthopaedic surgery. So we owe eternal gratitude to these organisations for providing that institution to which we could add in the ENT institute.”

Mr O’Driscoll believes it was better to work in parallel rather than trying to change a huge hospital to adopt new ways of doing things, so the development of the ENT institute at Beit CURE parallels the ENT service at the University Teaching Hospital.

But while the ENT institute is now firmly in place, it remains vastly underfunded and understaffed, he emphasises, “so the programme to improve that end of things is still going on. But you have to make a start somewhere and this has been a fantastic start and great credit is due to the many institutions I’ve mentioned for allowing this to happen. There certainly has been a new beginning and a new service in operation there now for some while.”

The focus now, he says, is on securing more funding, more staff and more training, as well as better links between the University Teaching Hospital and the Beit CURE hospital.

“The facilities at the University Teaching Hospital are still very, very difficult and we’re trying to build up a link between both hospitals so we can take the patients in there who cannot be operated on or need specialist care that we cannot provide ourselves. That really is the seed of our future development. That’s how it’ll work better.”

Already, there are some promising signs of progress.

“The government is certainly trying to step up to the plate in helping things and helping themselves.

“There is an ENT surgeon coming back from training in Nairobi and she will come back to the University Teaching Hospital and we hope this will help to foster the link more securely between the two hospitals to ameliorate the surgical care of patients.”

Mr O’Driscoll also believes that the College of Surgeons of East, Central and Southern Africa (COSECSA), the surgical training body serving 300 million people in 10 Sub-Saharan countries, including Zambia, can also play a major role in boosting higher surgical training in the country.

“Getting training and local services in place is the key to improving healthcare in Africa and all the focus must be on that because patients are still suffering.

“The key is training, the key is locally trained people, and the key is linking in to COSECSA for post-graduate training for the whole region.

“Unfortunately, with ENT surgery there are not enough people on the ground to run a training programme in that region. We have started the process but it’s going to be a little more time before we get that fully up and running.

“But we have a major advantage now with the new Nairobi-trained ENT surgeon and she will be another trainer we can deploy.

“We’ll have another surgeon from Malawi in the Beit CURE hospital and the University Teaching Hospital so we’ll be able to support the ENT teaching programme and develop a post-graduate training scheme. It will take time to develop but it has been started.”

The other challenge is to improve the infrastructure, he says. “We’re continuing to put equipment into Beit CURE hospital. But ENT is known for being a very technical surgical specialty and needs high-tech equipment.

“We have the equipment for modern, up-to-date surgical care of ENT patients and continuing that is important as is supporting individual hospitals as best we can.

“They’re not flush with money and all the things that make a hospital work. That’s a continuous challenge.

“We need the funding to have the cases done so we’re always looking for such funding.

“Having the unit built is a great achievement for all concerned and I reiterate the great support of Irish Aid and Gorta and such organisations as the Christian Blind Mission. But it needs to be supported.

With the support of “a very tolerant family”, Mr O’Driscoll makes an average of two visits a year to Zambia during his holidays, sometimes for a week and sometimes for 10 days or two weeks.

“It depends on how much time I can afford. It needs to be done. And once you start something, you can’t just turn your back on it. It needs to be nurtured and supported. It’s about helping people to help themselves—that can be a life-changing thing to do.”