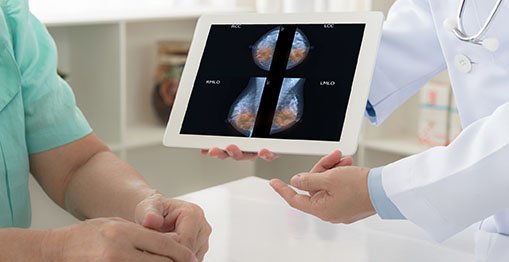 Priscilla Lynch reports on the latest data on breast cancer incidence, treatment, and outcomes in Ireland

The National Cancer Registry of Ireland (NCRI) recently released a new trends report for breast cancer (Cancer Trends: Breast cancer 1994-2016). This report shows that the rate of new cases of invasive breast cancer in Irish women has stabilised since 2008 and the mortality rate due to breast cancer decreased by about 2 per cent per year in the period 1994-2016.

There were 62,052 cases of newly diagnosed invasive or in situ breast tumours registered in Ireland by the NCRI for the period 1994–2016, of which 56,366 were invasive (ICD10: C50) and 5,686 were carcinoma in situ (ICD10: D05). Women accounted for the vast majority (61,617) with just 435 cases registered in men in this period. Based on exclusion criteria, 54,047 cases of invasive breast cancer (53,642 in women, 405 in men) and 5,062 cases of breast carcinoma in situ (5,038 in women, 24 in men) were considered ‘reportable’ for incidence purposes. These figures exclude second breast tumours of ‘similar’ morphology (for a given behaviour) and in situ tumours following an invasive breast cancer of similar morphology.

There was an annual average of 3,053 invasive breast cancer cases diagnosed in Irish women in the period 2014-2016 with an increasing trend in the number of new cases. In particular, greater increases occurred after breast cancer screening roll-outs in 2000 and 2007. BreastCheck offers screening every two years to women aged 50-64 years (50-69 years since 2018); it began in the eastern half of the county in 2000 and was rolled out to other regions from 2007.

The trends in the screening age group, 50-64 years, were quite complex, showing the typical increase and subsequent slight decline in incidence rates following the roll out of the screening programme, the NCRI report notes. This can be seen in the steep increases from 1998 to 2002 (reflecting roll-out on a regional basis) and from 2006 to 2010 (reflecting national roll-out). The incidence rates for the over-65s rose over the period 1994-2008 with an annual percentage change of +1.8 per cent, followed by stabilisation in the period 2008-2016.

The majority of breast cancer cases in women in Ireland are stage II at diagnosis, though the proportion that are diagnosed at stage I has increased over time, the report reveals.

The percentage of late stage (III and IV) cancers remained fairly static at around 20 per cent across the three periods. The report points out that the TNM staging criteria applied to these cases changed between 2013 and 2014 but this should not unduly affect these broader comparisons; 2016 stage data were less complete and therefore was excluded.

Overall, 97 per cent of female breast cancer patients diagnosed during 2008-2015 received tumour-directed treatment for their initial diagnosis, (whether for curative or palliative purposes), according to the data in the NCRI report.

Surgery was the most frequent modality, followed by radiotherapy, hormone therapy and chemotherapy (including immunotherapy or ‘targeted’ therapy).

Trends in hormone therapy use are unclear, but data on hormonal therapy is more difficult to collect and figures may be incomplete, noted the NCRI.

The proportion of patients having breast-conserving surgery was highest, and having mastectomy lowest (27 per cent), in the 50-64 age group (68 per cent).

A slightly higher proportion of patients in the 50-64 age (screening-targeted) group had radiotherapy (82 per cent) than in the under-50 group (77 per cent), while chemotherapy use in the 50-64 group was substantially lower (53 per cent) than in the under-50s (74 per cent). The chemotherapy difference likely reflects a higher proportion of more aggressive cancers in the younger group, compared with post-menopausal and screening-detected cancers, the NCRI explained.

With the exception of hormonal therapy, treatment percentages for patients aged 65 or over, were markedly lower than for younger patients, although differences would be more extreme if presented for patients aged 75 years or more.

Use of hormone therapy varied less by stage (at least 52 per cent-59 per cent) than use of other modalities. Hormone therapy was the most frequent single-modality treatment overall (at least 7 per cent of all patients and at least 18 per cent of those aged 65+).

Substantial improvements in survival are also evident for each age-group (15-49, 50-64, and 65+). However, the extent of the improvement, comparing diagnosis period 2011-2015 with 1994-1999, has been highest for the screening-eligible age-group (50-64 years). For this age-group, the survival improvement is equivalent to an average reduction in five-year
mortality risk by about 70 per cent, compared with a 55 per cent reduction in the mortality risk in the under-50 group and a 40 per cent reduction in the 65+ group. However, the extent of the survival improvement (mortality reduction) in the 50-64 age group is likely to be exaggerated somewhat by ‘lead-time’ bias, ie an artefactual improvement in measured survival time reflecting earlier diagnosis through screening, in addition to any ‘real’ improvement reflecting diagnosis at a more treatable stage, cautioned the NCRI.

“It is encouraging to see that mortality rates showed a consistent downward trend over the past 20+ years. Further work needs to be done to examine the effect of screening on incidence, stage, receptor status and mortality using combined data from the National Cancer Registry and the National Screening Service,” the NCRI report concludes.

Full report can be accessed at www.ncri.ie/sites/ncri/files/pubs/Trendsreport_Breastcancer_20191107_0.pdf

There were 435 breast tumours registered in men in the period 1994-2016, with six of these cases considered to be multiple diagnoses (thus removed from the analysis dataset). Of the 429 cases remaining, 405 (94.4 per cent) were invasive breast cancer, while 24 (5.6 per cent) were breast carcinoma in situ.

In the period 2014-2016 there was an annual average of 25 cases of invasive male breast cancer diagnosed per year. The median age at diagnosis was 68 years, with 50 per cent of all men aged between 52 and 74 years at diagnosis.

For the invasive cases, the highest proportion (45 per cent) comprised stage II breast cancer, though this has declined in the most recent period.